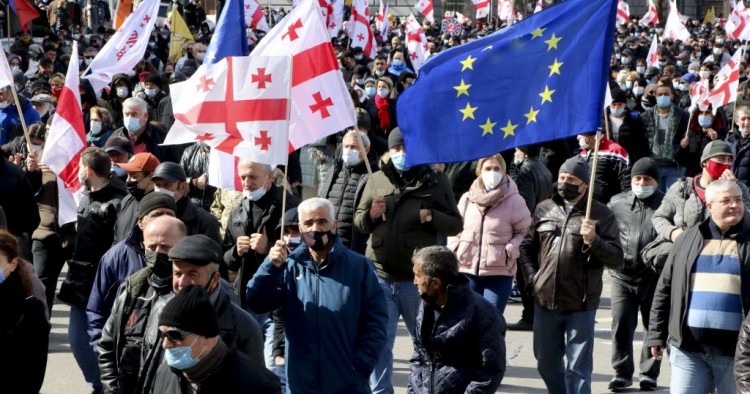 Earlier this week, Georgian law enforcement arrested United National Movement (UNM) party chairman Nika Melia on charges of inciting violence during anti-government demonstrations in 2019. The arrest has left many outraged and is the latest event to deepen political divisions in the country.

Georgians have witnessed increasing political instability since October, when the country’s opposition parties denied the results of the 2020 general election and refused to take up their seats in parliament. Their protests came despite international consensus that the elections were “competitive, with fundamental freedoms respected.”

Attempts by Georgia’s Western partners to facilitate dialogue and convince elected opposition parliamentarians (60 out of 150) to take their seats in parliament have so far been unsuccessful. Only handful of opposition parliamentarians (six so far) have agreed to participate in the work of parliament, with internal divisions on whether they should continue to boycott, take up their mandates, or push for a snap election (at a cost for the country of 40 to 50 million GEL).

There are valid arguments as to how the government could have handled Melia’s arrest better. But more important is what’s at stake for the future of Georgia – both domestically and as a member of the international community.

Georgia has long paved the way in the region on democratic reform and as such, enjoys close relationships with the West. This comes with great responsibility for both sides of the political spectrum. While accountability is higher for the government, the elected opposition is obliged to deliver to their voters – 76 percent of whom consider it important for all elected political parties take part in parliamentary processes.

Domestically, Georgia must continue to build these strong democratic institutions and maintain a functioning government with a strong opposition. This is more important than ever as the country continues to manage the pandemic and economic fallout. At a time when Georgia is in desperate need of robust solutions for the health crisis, political power play should be the least of people’s worries.

Georgia has made tremendous progress toward EU and NATO membership and it must continue in this direction. Political tensions have experts questioning Georgia’s Euro-Atlantic aspirations, but as a valued contributor to NATO missions and strong European partner connecting East with West, Georgia has long made a choice for Western integration. This must be respected by all political parties, and efforts must be made to ensure skeptics of integration are not given a platform to derail progress.

In recent days, we’ve heard criticism from U.S. and European policymakers and experts, with discussions ongoing as to how to respond to the situation. But now is not the time to leave Georgians out in the cold. The country will buckle under further polarization, especially in the face of Russia. Rather, what’s needed is stronger support from allies to help strengthen Georgia’s democratic institutions and rule of law so the country can continue on this Western path. This of course is critical not only for Georgia but for broader Black Sea security.

In a week in which Georgians marked 100 years since Soviet occupation, we are reminded that the only beneficiary of internal political instability is Russia. With the pandemic, and as Georgia is surrounded by growing Russian military presence following the Nagorno-Karabakh conflict, politicians on both sides must not give European and Transatlantic skeptics any more reason to delay the process of full-scale integration. Instead, they should embrace compromise and unite for the common goal of keeping Georgia intact.

Ana Khizanishvili is a Senior Fellow with MEI's Frontier Europe Initiative. The views expressed here are her own.