Facing a changing main opposition, Erdoğan doubles down on polarization 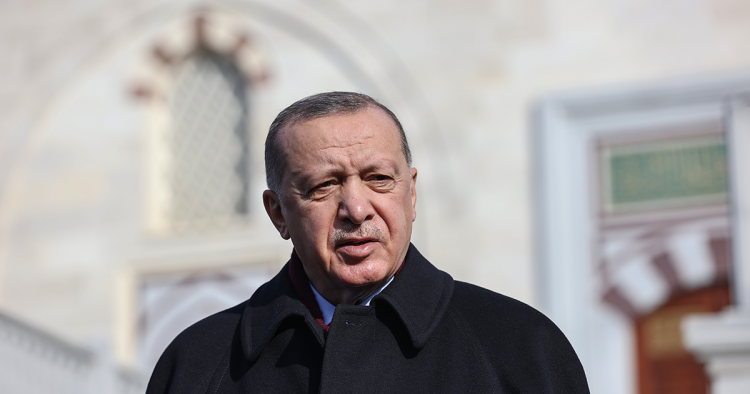 Turkish President Recep Tayyip Erdoğan continues to pursue a policy of polarization as he loses ground amid growing economic pressure in the country. After the first Friday prayer of 2021 at Istanbul’s Hagia Sophia, a Byzantine Christian cathedral turned mosque turned museum that was converted back into a mosque last July, Erdoğan unleashed his symbolic populist discourse by targeting female politicians with the main opposition Republican People’s Party (CHP) who wear headscarves. Although this “old and perpetual debate” in Turkey seems to have returned to the national discourse by Erdoğan’s making, the course of the debate does not appear to be going the way he expected.

Last week, on a TV show, a veteran CHP MP and former culture minister, Fikri Sağlar, explained he felt uncomfortable seeing female judges wearing headscarves in courts. He stated that, “When I stand before a judge wearing a türban, I doubt that she will defend justice. Some of them act militantly and ideologically, and a struggle must be waged against this.” The CHP quickly responded after the comments, saying Sağlar’s views did not represent the party’s official stance on the headscarf issue. CHP Chairman Kemal Kılıçdaroğlu also reiterated that the CHP is not interested in how women dress in their daily lives, at work, or in the courts.

Seeing an opportunity to galvanize his supporters and trigger fear as he often does as a populist leader, Erdoğan told reporters that Sağlar’s comments were a reflection of the CHP’s fascist views, similar to those that it held in the past, and he called the CHP’s female politicians who wear headscarves “window mannequins,” in an apparent reference to their role as dummies to sway voters. In contrast to previous debates over headscarves between the ruling Justice and Development Party (AKP) and the CHP, this time Erdoğan offered the opposition a gift by giving them the opportunity to explain how the party has changed and emphasize that they have no problem with headscarves.

In the early years of AKP rule, the CHP, under Deniz Baykal’s leadership, stood as the “guardian” of the secular republic, maintaining an oppositional discourse that served the AKP’s polarization and populism and only made its job easier. Especially under Baykal, the CHP followed a nationalist agenda, standing aloof toward the Kurdish issue and opposing EU accession. The party has long relied on secular middle-class voters and showed an inability to engage with the urban poor. The CHP’s fear of Islamization also benefited the AKP’s populist discourse. However, under Kılıçdaroğlu’s leadership since 2010, the CHP began transforming its discourse and adopting new election strategies. In the 2011 elections, the party’s transformation was visible in its slogan, “CHP for everyone.” The party began to emphasize individual liberties rather than “assertive secularism.” The party’s secular-Alevi leader, Kılıçdaroğlu, also transformed the CHP’s fear of Islamism and embraced an inclusive policy toward pious voters.

Kılıçdaroğlu is a master of creating coalitions in a polarized country by building bridges between political parties from both the left and right sides of the political spectrum. His efforts with other party leaders to unify the opposition brought victories for the CHP in major Turkish cities, including İstanbul and the capital, Ankara. More recently, amid COVID-19 restrictions and Turkey’s fragile economic situation, bread-and-butter issues have taken precedence over identity issues. This presents the CHP with a key opportunity to capture the votes of the urban poor, who make up the AKP’s traditional base.

Recent polls show that with their performance during the COVID-19 crisis, despite all the restrictions imposed by the central government, the mayors of İstanbul and Ankara, Ekrem İmamoğlu and Mansur Yavaş, respectively, have emerged as potential presidential contenders to Erdoğan. Another rising figure within the party and frequent government target is Canan Kaftancıoğlu, the head of CHP’s Istanbul branch. She successfully organized a grassroots policy reminiscent of those of the AKP and its predecessor, the Islamist Welfare Party. In addition, the CHP has focused more closely on gaining the sympathy of intellectuals, liberals, and Kurds. A recent survey by Rawest Research found the popularity of the CHP and İmamoğlu is increasing among Kurdish youth. Hence, the party is transforming its image from an assertive secular, Kemalist, Turkish nationalist stance to an inclusive, democratic, centrist one.

As Erdoğan and other establishment actors try to push the “headscarf issue” into the national discourse once again, more than 382 women were killed in reported cases of femicide in 2020. Despite this epidemic of violence, the government is considering the potential withdrawal from a European treaty to prevent gender-based violence, known as the Istanbul Convention. According to a report by the Istanbul Political Research Institute (IstanPol), in Turkey women’s median income is 30 percent less than men’s, 73 percent of women over 15 years of age are not employed, and youth unemployment among women is more than 37 percent. Other research conducted by IstanPol found that young women felt more at risk and exposed to gender-based discrimination in the workplace than their male colleagues. While the AKP lifted the headscarf ban in state institutions in 2013 during its third term in power and wearing a headscarf is no longer a disadvantage for women in Turkey, the party’s policies, which undermine women’s rights and security, remain a significant problem.

“Fear and resentment” vs. “radical love”

Both election results and recent public opinion polls have shown Erdoğan has a stable core of loyal supporters, comprising approximately 30 percent of the electorate, who can be expected to vote for him, while the number of undecided voters in both camps — the government and the opposition — is increasing. Given the parameters of the current electoral system, both the governing People’s Alliance and the opposition bloc need to reach out to new or undecided voters. Erdoğan is still the most favorably viewed politician in the country; however, his approval rating decreased to 45.6 percent in December 2020, according to Metropoll Research. For this reason, Erdoğan will use every opportunity to rally his supporters. However, in the last two years, the opposition has reduced its anti-Erdoğan tone, focusing more on economic policies, and has been able to propose an alternative economic and political agenda. In the 2019 local elections, the CHP adopted an approach of “radical love” as a response to the rhetoric of “fear and resentment” that Erdoğan often uses. In essence, this strategy is based on the idea that opponents should ignore the populist leader while loving his supporters, focusing on voters’ everyday needs and concerns instead of getting involved in polemics with the leader.

While the government seeks to revive Turkey’s old debates, the opposition is trying to create a new vision for the future of the country. The unification of the opposition, which has significant ideological differences, also embraces the country’s plurality and need for dialogue rather than polarization — and this seems set to extend beyond domestic politics as well, with a restoration in foreign policy likely to be on their agenda in the months to come.

Seren Selvin Korkmaz is a Non-Resident Scholar with MEI's Turkey Program, a political analyst, and the executive director of IstanPol Institute, an Istanbul-based think tank. She is also a doctoral researcher at Stockholm University Institute for Turkish Studies and teaches Turkish and Middle Eastern politics. The views expressed in this piece are her own.