As Israelis head to the polls once again, is the fourth time the charm? 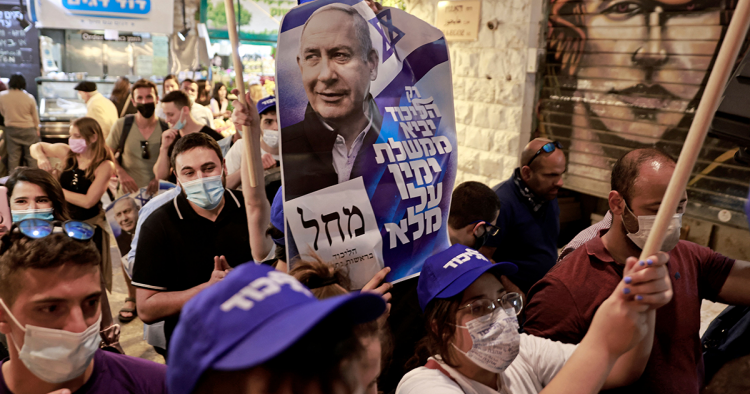 Israelis are going to the polls on Tuesday for the fourth time in two years. But while the main issue in each of these elections has been to decide the fate of a single man, Prime Minister Benjamin (“Bibi”) Netanyahu, the political landscape has meanwhile been shifting significantly, primarily toward the right. In each of the previous contests, Netan­yahu’s main opposition was from a large centrist party, while he represented a fairly united coalition of right-wing and religious parties, but now the right itself is split, with several parties vowing never to join a coalition with him in it. They have a large pie to squabble over, though, with rightist parties forecast to divide up about 80 of the Knesset’s 120 members. Forecasts are complicated by Israel’s proportional representation system’s 3.25% threshold. The votes of any party not reaching it are wasted, thus potentially disenfran­chising up to 150,000 voters, perhaps even several times over, if two or three parties narrowly miss the threshold.

Netanyahu is in a particularly anomalous situation for this election. His long-awaited criminal trial on three counts of fraud has begun and continues in fits and starts. If he can put together a Knesset majority and form a government, he could probably arrange to pass an immunity bill to bar prosecution of a sitting prime minister. Thus, hanging on to power has become an almost existential issue for him. His Likud party is forecast to get about 30 seats, which would make it the largest party, but needing about 30 more seats to reach a majority of 61. At this point he is the front-runner, but his victory is by no means assured.

He did not expect to be in this precarious position. Israel has been by far the most successful country in the world in distributing the coronavirus vaccine to its population and it ended COVID-19 restrictions last week, right before the election (coincidentally of course). Moreover, he has won virtually unanimous praise in Israel for obtaining U.S. recognition of Jerusalem as Israel’s capital and for the Abraham Accords, normalizing relations with four Arab states. But after his unprecedented 15 years as prime minister, many Israelis have nevertheless had enough of him for a variety of reasons.

Bibi’s only reliable allies outside the Likud are the two “ultra-orthodox” (Haredi) parties, which, though he himself is completely secular, have stood by him his entire career, and reaped the rewards in largesse for their educational and religious institutions. They are expected to get 15-16 seats between them.

On the other hand, Netanyahu’s widely-recognized knack for alienating politicians in his own camp is represented by no less than three parties led by former close allies: New Hope, led by Gideon Sa’ar; Yamina, led by Naftali Bennett; and Yisrael Beiteinu, led by Avigdor Lieberman. New Hope’s platform is essentially the Likud without Bibi, Yamina has an annexationist agenda, and Lieberman’s party is largely composed of fiercely nationalistic and strongly secular Russian immigrants. All three badly want to be prime minister, but the first two have seen their parties decline in the polls to about 10 seats each while Lieberman is steady at 7, so each now hopes to be the kingmaker instead. Sa’ar and Lieberman have sworn never to support Bibi, while Bennett is more equivocal.

The wild card: Small parties near the threshold

Considerable uncertainty revolves around the electoral viability of four small parties hovering around the threshold percentage in the polls. A few thousand (or fewer) votes above or below it could decide the composition of the new ruling coalition or prevent one altogether, and send Israelis back to the polls for a fifth round in a few months’ time. Most recent polls show them all getting in with 4 or 5 seats, but it will be touch and go.

Meretz, the oldest and most established of them, is one of the two existing represent­atives of the almost extinguished center-left. The other “left” party, Labor, seemed on the verge of extinction less than two months ago, but its dynamic new leader, Merav Michaeli, has rescued it and polls suggest it will win 6 or 7 seats. These were partly at the expense of Meretz, which is floundering as a result.

Another struggling party is the centrist Blue and White, headed by Benny Gantz. It received 35 seats in last year’s election, running on an anti-Netanyahu platform, but when Gantz broke his promise never to go into coalition with Bibi, most of its voters and Knesset members left in disgust, and Gantz is now fighting for his political life.

On the very far right of the political spectrum is the “Religious Zionist” party. The name has been appropriated by several fringe parties running together, including the Kahanist movement, adhering to the teachings of the openly racist Rabbi Meir Kahane, who advocated expulsion of Arabs from Israel and was assassinated in 1990. Netanyahu has encouraged the party because it might turn out that the only viable path to a government is by including them.

Mansour Abbas's conservative Ra'am party (also known as the United Arab List) is another possible partner for Bibi. Abbas has said that is a possibility, but that he would never sit in a government with the “Religious Zionists.” It would, however, be the height of irony were the unwritten taboo against including an Arab party in an Israeli government to be broken by the same Bibi Netanyahu who, on election day in 2015, sought to drive turnout among his base by warning that Arabs were “voting in droves.”

The other primarily Arab party is the Joint List, composed of three parties running together (formerly including Ra’am) and led by Ayman Odeh. It is the largest opposition party in the current Knesset with 15 seats, but is now expected to win only 8 or 9. Arab voters feel that the Joint List has accomplished little for its constituents (not an uncom­mon feeling among many Israelis) and some are peeling off to vote for “Zionist” parties of the left or even (a new phenomenon) of the right, seen as an indication that some (or many) Israeli Arabs are voting their economic interest or social/cultural values rather than their Arab identity.

The great white hope of the Israeli center and even of the denuded “left” is Yair Lapid of the Yesh Atid party, who has steadily gained in the polls as Sa'ar's New Hope and Bennet's Yamina have fallen. Meretz and Labor have already endorsed him, and he has at times been close to Bennett, but it is hard to imagine them all together in a government based solely on shared anti-Bibiism. Lapid, who split with Blue and White last year rather than join Bibi’s government, is polling at 20 seats but it would take a con­sider­able conjunction of luck and political skill for him actually to be able to put together a government.

A shift to the right

What any of these possible combinations could mean in governmental policy terms is literally imposs­ible to predict. Perhaps the only government that could be formed would be one dependent for its survival on every single Knesset member, compared to which the U.S. Senate might seem a model of harmony and legislative efficiency. Even if a govern­ment were formed, it's hard to imagine it lasting much more than a few months. That would suit Bibi (if no one else) though, as it would buy him another year as interim prime minister.

However, what is beyond question is that Israel has moved well to the right, and no conceivable government will favor a two-state solution or an end to the occupation. Thus, any coalition, not only one headed by Bibi, must expect to come into some degree of conflict with the new American administration. Joe Biden is not someone eager to pressure Israel, but his own Democratic Party, including many of its Jewish donors and supporters, is increasingly critical of the occupation and will expect some movement on that front. Any such move is certain to come into conflict with the Israeli right, which will be in charge of the country however the election turns out.