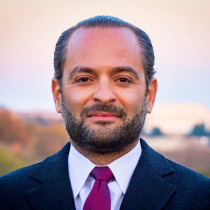 As Director of Strategic Outreach Firas works with MEI’s President and Vice President for Development on strategic fundraising engagements with corporate and individual donors, and works with MEI’s Senior Vice President on engaging with Congress, the U.S. administration, think tanks and other key members of Washington’s policy community. He is part of MEI’s core team to grow the impact and resources of the organization.

Firas is also a Senior Fellow at MEI and a published expert on the politics of Lebanon and Syria, the geopolitics of the Arab Gulf, and the dynamics of the broader Middle East region. Furthermore, he is an adjunct professor with George Washington University, teaching graduate courses on the Middle East at the Elliott School for International Affairs. His writings have appeared in top-tier publications, including the Washington Post, Wall Street Journal, Foreign Policy Magazine, Foreign Affairs and the Los Angeles Times. He is a regular commentator on US politics and the Middle East for global news networks including BBC, CNN, CNBC, Al Arabiya, and others.

Firas is also President of Global Policy Associates (GPA), a boutique political consultancy focused on U.S. foreign policy and the region. His professional experience includes an extensive track record working with various Washington D.C. based institutions. He was director of Arabia Foundation and has been a member of the government affairs team at DLA Piper, a leading global law firm. He served as an associate to Ambassador Dennis Ross, the former US Middle East presidential envoy. Earlier in his career, Firas oversaw research on the Levant for Eurasia Group, a prominent political risk advisory based in New York.

Firas holds a Master of Science in Foreign Service degree, and an honors certificate in International Business from Georgetown University. He completed his undergraduate degree in Political Studies at the American University of Beirut.