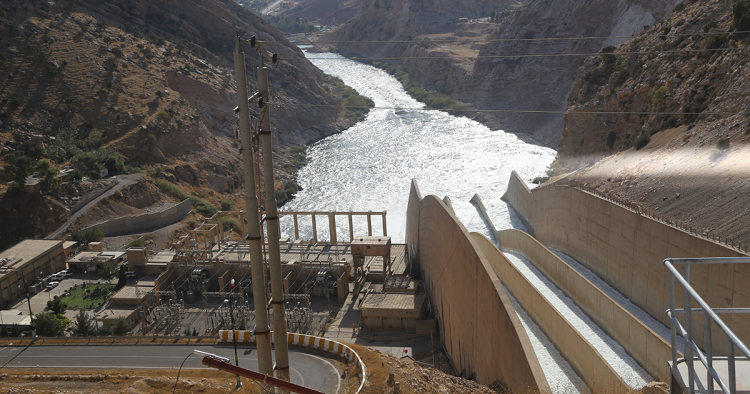 Iran and Iraq are frequently at odds over water issues. Iraq depends on the Tigris and Euphrates rivers for nearly all of its water. But Iran is building dams to redivert some of that water, causing alarm and creating major water shortages for Iraq.

Tehran prefers not to work with Baghdad on water projects, instead opting for quick fixes for its own water problems. Some two-thirds of Iran’s 10.2 billion cubic meters of water that exits the country actually flows across its borders into Iraq, which could lead to a major water shortage inside Iran by 2036.

To address the issue, Iranian President Hassan Rouhani has introduced what he calls “modern” irrigation projects along the western border with Iraq, aiming to quadruple the volume of Iranian agricultural products. In reality, the projects are not terribly modern and involve the construction of a number of small dams. In 2019, for example, Iran announced plans to build 109 dams over the course of about two years, and to redirect the extra water in dam reservoirs to other drought-prone provinces across the country.

For its part, the Iraqi government says its own water insecurity is acute, and that Iran should halt these water blockages. The Kurdistan Regional Government (KRG) and the spokesperson for Iraq’s Ministry of Water Resources have accused Iran of rediverting the Tigris in the north, and violating international law that prohibits harmful disruptions in natural river flows. But from Tehran’s point of view, its actions are legal, given that the Little Zab and Sirwan rivers in the KRG originate from Iran’s northwestern Zagros Mountains. Iran continues to divert the Little Zab to feed Lake Urmia, while the Sirwan river is diverted for irrigation projects in the Sarpol Zahab border region of Iran.

As a result of Iran’s actions, the flows of the Sirwan and Little Zab — both tributaries of the Tigris river — have fallen significantly. Iran’s Nawsud water tunnel, situated just 10 kilometers west of the large Daryan dam, has diverted the Sirwan to Kermanshah and other parts of western Iran. The Kolsa dam in Iran’s Sardasht region has caused a reported 80% drop in the water levels in the Little Zab.

Last year, to address the problem, the KRG took unilateral action through an aggressive dam-construction project in the north, given that the Tigris and Euphrates river flows are expected to decline by a further 50% by 2030. The KRG says that these new dams, along with its existing 17 dams, are essential to generate power and provide water for irrigation, fisheries, and tourism, even if they hinder water supply to other parts of Iraq. This is also despite the fact that the region has ample water resources of its own, although they are poorly managed.

In southern Iraq bordering Iran, the Mesopotamian Marshes are shrinking despite restoration efforts. This wetland area was once the largest ecosystem in western Eurasia. The drainage of the marshes along with dam structures causes severe salinization in rivers, including the Karun. Iran extracts water from this river and discharges harmful water through it into the Shatt al-Arab, a process that further increases salinity. When then-Iraqi Prime Minister Adel Abdul-Mahdi traveled to Tehran in 2019, he called for the 1975 Algiers Accord, which divides the Shatt al-Arab between Iran and Iraq, to be upheld and the joint management of water projects. But since then the two countries have held only a few meetings to promote joint water management, and neither side has seriously explored alternatives like altering water-intensive irrigation patterns.

Consequently, Iran’s dam projects and water diversions could lead to a major catastrophe in the next few years and precipitate mass human migration, local officials in Iraqi Kurdistan have warned. It will also harm farmland, wildlife, and tourism. Some 750 acres of farmland and 400 fishing projects could face destruction. The Nawsud water tunnel, which became operational last year in Iran, could take away 100% of drinking water in parts of Iraqi Kurdistan, and deplete its agriculture and fishing resources. The Sirwan and the Little Zab provide water to large swaths of Iraq over the summer season, when agricultural projects pick up. River flows from Iran to the Sirwan dropped late last year to 7 cubic meters per second, down substantially from the original level of 45 cubic meters per second. The Little Zab river flow dropped to 2 cubic meters per second, which essentially means that water flows have halted. Iran has completely cut off flows from the Dukan dam water source, on which 100,000 people depend, and which connects to the Little Zab, the KRG’s Dam Directorate said last year.

Complications over proper water resource management could push Iran to completely ignore Iraq’s interests moving forward. Moreover, the economic stakes involved are significant. In Iran, lucrative water projects on the border with Iraq are linked to powerful state and quasi-state organizations like the Khatam al-Anbiya, which is affiliated with Iran’s Revolutionary Guards Corps (IRGC); the Astan Quds Razavi, which manages some of Iran’s religious-based wealth funds; and the Bonyad Mostazafan (Foundation for the Oppressed), which carries out development projects.

The need for water diplomacy

It is too early to say if Iran will witness a major conflict with Iraq over water anytime soon. But it is possible, given growing water scarcity issues. This is why policy experts in Iran are calling for proactive water diplomacy that goes hand in hand with Iran’s goal of building regional security with the 12 neighboring countries with which it shares river flows. For now, Iraq’s water disputes with Iran seem to have reached a stalemate, and prospects for transboundary water cooperation between the two countries are dim, although the issue will need to be addressed at some point.

Iran’s national development plans prevent the flow of water across its border to Iraq and other neighboring countries, though joint agreements are in place to manage surface border waters with neighbors, often allowing a 50:50 share.

If the water dispute is to be resolved, Iran and Iraq should maximize the use of their wasted river flows, which are substantial; introduce modern irrigation and renewable energy technologies; divert water to industrial development along their borders, which is less water-intensive than agricultural projects; and revive marshlands. Inside Iran, experts at the Center for Strategic Studies are calling for an end to so-called “water mafias” that lobby the parliament and government for more dam construction and water-diversion projects. Finally, Iran and Iraq should develop plans to deal with Turkey’s Ilisu Dam on the Tigris river. The dam will reduce water flows in Iraq and the Karkheh river in Iran, which feeds the Mesopotamian Marshes shared by Iran and Iraq, a region that has been referred to as the “Silk Road to peace.”

Banafsheh Keynoush is a foreign affairs scholar, and a fellow at the International Institute for Iranian Studies. She conducted fieldwork in the Middle East for two decades, was recently a visiting scholar at Princeton University, and a visiting fellow at the King Faisal Center for Research and Islamic Studies. The views expressed in this piece are her own.