Dispatches from Riyadh: Reflections on the Global Cybersecurity Forum 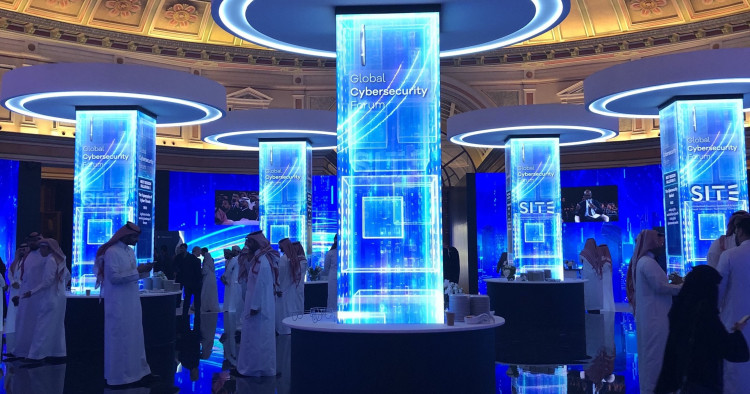 The Middle East Institute’s (MEI) Center for Strategy and Emerging Technology (CSET) participated in the second annual Global Cybersecurity Forum (GCF) in Riyadh this past week. Here are our reflections on the conference, the conversations we had there, and the GCF’s overall agenda.

The tech cold war is the elephant in the room

In Riyadh, the elephant in the room was great power competition and its impact on digital transformation goals for emerging nations. The new U.S. restrictions on Chinese technology are expected to have a secondary impact on emerging countries that have been using Chinese tech and human talent for basic cost-benefit reasons rather than political calculations. Emerging markets began to take notice of the drastic change in Washington when the Trump administration rolled out the Clean Network Initiative (CNI), with its laser-like focus on limiting U.S. partners' and allies’ exposure to Chinese 5G technology from Huawei and ZTE. However, what seemed like a Trump-era policy choice is now seen as a whole-of-government approach to maintain U.S. global tech and cyber dominance and pursue an aggressive tech containment strategy of China. The fear is that the fallout from this tech cold war will slow down cooperation on artificial intelligence (AI) and rollout of 5G/6G networks, while also exploiting tech chokepoints for geopolitical gains.

The Indo-Abrahamic alignment is gaining momentum with Indian-Saudi relations intensifying and expanding on the political and diplomatic level, as well as on the tech and cyber front. On the sidelines of the GCF, India and Saudi Arabia announced an upcoming MoU aimed at expanding their cooperation on cybersecurity. Cyber is one of the few areas that provides tangible results for both countries, under the radar, and has a dual nature, encompassing both state and civilian security.

One of the speakers at the GCF asserted that Silicon Valley might be the next Rust Belt — a claim that would have been perceived as controversial 10 years ago. Today, however, some might agree with that assertion. More and more tech and cyber conversations are now taking place in cities other than San Francisco, Los Angeles, and Shanghai — a reflection of the “rise of the rest” and their focus on building up their domestic tech and cyber ecosystems and actively contributing to setting the global cyber and tech agenda. Decentralization of tech hubs and talent is the new norm.

The question of gender representation in the cyber workforce is not an afterthought but an integral part of setting any cyber agenda going forward. This was a topic of particular focus at the GCF. Indeed, the younger attendees at the Forum were mostly young, college-educated Saudi women pursuing careers in cybersecurity. As the world faces fierce competition over talent in the cyber and tech ecosystems, empowering women to play a greater role in cybersecurity is going to be a major focus for developing nations moving forward. In September, the GCF released a report in which it argues that empowering women to work in cybersecurity is a win-win, as it would strengthen cybersecurity capabilities, improve business performance, and diversify national economies.

The question of how to ensure safety and security for children in cyberspace is a major topic of concern. From raising awareness to establishing tighter local and global rules and creating new partnerships with tech companies and multilateral organizations, child safety is front and center. During the Forum, Saudi Arabia’s National Cybersecurity Authority signed an initial agreement with UNICEF to cooperate on child protection in cyberspace.

The case for tech-focused “minilaterals”

MEI’s CSET focuses on finding common ground between like-minded nations on tech and cyber. Based on talent, financial resources, digital and cyber ecosystems, political will, and views on great power competition, there are synergies between countries like India, South Korea, Egypt, Saudi Arabia, and the UAE on cyber and tech issues that span from 5G/6G networks to countering ransomware and from drones to anti-drone capabilities.

Great power competition, tech decoupling, and the rise of the rest are expected to incentivize tech middle powers to take on a more active role in setting the global agenda for tech and cyber. Within the Middle East, it is Gulf states like Saudi Arabia and the UAE — through events such as the GCF, the Global AI Summit, and other regional forums — that so far have proven themselves the best equipped to take on this role and advance the tech and cyber agenda.