The Future-Seeking, Team-Building 5th Fleet Is Busier Than Ever 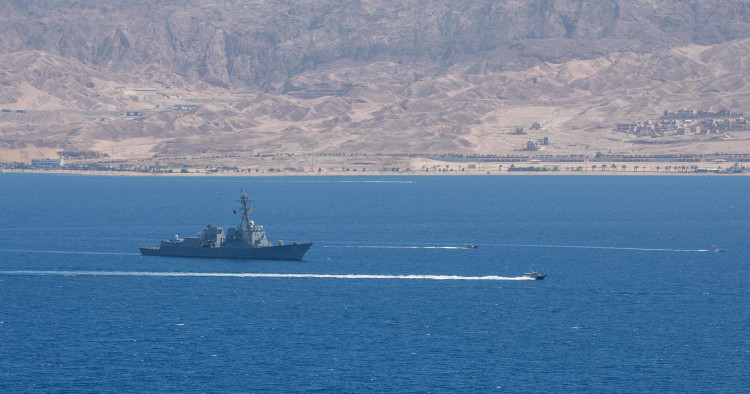 This article was co-authored by Vice Adm. Brad Cooper, the commander of U.S. Naval Forces Central Command, U.S. Fifth Fleet, and Combined Maritime Forces, and Bilal Y. Saab, senior fellow and the director of MEI's Defense and Security Program, for Defense One.

In recent years, the United States has stepped up its efforts to promote a Middle East security order in which cooperation is more widely preached and effectively practiced among like-minded nations. Nowhere has this multilateral approach to regional security been more credible and fruitful than in the maritime domain.

Shared security threats focused on Iranian aggression, coupled with a mutual desire to unlock great economic opportunities, have prompted an increasing number of Arab states and Israel to cooperate more closely at sea. Yet no factor has been more instrumental to this cooperation than U.S. leadership with U.S. Central Command’s renewed focus on partnerships.

For example, earlier this year, the Bahrain-based U.S. Navy’s 5th Fleet led the largest international maritime exercise in the Middle East to date. It included more than 60 nations and international organizations, all working together to improve capabilities and interoperability.

In November 2021, the United States launched a naval exercise in the Red Sea in which it trained side-by-side with Arab and Israeli navies to help ensure freedom of navigation. Though the drill was historic, it was a logical consequence of the increasing closeness in Arab-Israeli relations following the Abraham Accords in September 2020, which saw the United Arab Emirates and Bahrain normalize their ties with Israel.

But beyond these two exercises, for more than two decades, the United States has led the mission of maritime security in the region through the Combined Maritime Forces—a coalition comprising 34 member nations that seeks to foster familiarity and improve coordination on counterterrorism, counterpiracy, and maritime interdiction operations—and since 2019, the 11-member International Maritime Security Construct, which was created to deter and respond to Iranian threats to the freedom of commerce and navigation.