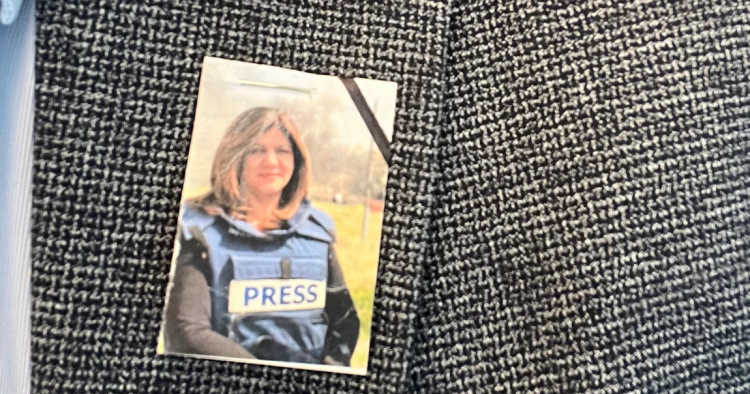 There are certain events that are so impactful that you remember exactly where you were and what you were doing when you heard about them. The killing of Shireen Abu Akleh, the veteran Al Jazeera journalist, last Wednesday in the occupied West Bank was for me just such an event — both because of who she was and what I was doing at the time.

Although the exact details of her death are not yet known, several Palestinian eyewitnesses, including colleagues of Shireen, have pointed the finger at Israeli sniper fire. Israel itself seems to be moving away from its initial claims, first that she may have been shot by a Palestinian gunman and then later that it was impossible to know who shot her. Backtracking on their initial rhetoric, Israeli military authorities now say they do not intend to investigate the killing. A truly thorough and objective investigation into who is responsible for Shireen’s killing, much less actual accountability, in any case was unlikely given Israel’s abysmal track record of investigating itself.

Shireen, who is also a U.S. citizen, is not the first Palestinian journalist to be killed in the line of duty as a direct result of Israeli occupation — at least 45 Palestinian journalists have been killed by Israeli forces since 2000 — but she is certainly the most well-known. Perhaps more than any other contemporary journalist, Shireen brought the stories of ordinary Palestinians living under Israeli occupation to the world. Her coverage of the daily horrors of the Second Intifada two decades ago made her a household name in Palestine and across the Arab world. Although I did not know Shireen personally, as someone who has lived in Palestine and has followed her intrepid reporting intently for many years, I too felt a deep sense of personal loss at the news of her killing.

But what made Shireen’s senseless death even more poignant for me was that at the very moment she was killed I was playing host to a group of Palestinian journalists who were visiting Washington for a week of media workshops, briefings, and official meetings. Needless to say, the news of Shireen’s violent death was even more devastating for our Palestinian visitors, all of whom knew her personally.

The visit was part of a 10-month-long capacity-building program funded by the State Department and implemented by the Middle East Institute. The group consisted of six Palestinian journalists from the West Bank, East Jerusalem, and the Gaza Strip — though only three actually made it to Washington. One journalist was prevented from boarding the plane in Amman because she had the Sputnik vaccine, despite producing the requisite negative PCR test result. Moreover, the two journalists from Gaza — despite having Israeli permits and U.S. visas and months of preparation — were prevented from leaving by Israel’s sudden decision to seal the border. Thus, even before any of them arrived in Washington, the group got its first, albeit inadvertent, lesson on the limits of U.S. influence with its closest ally in the region.

The program was designed to increase the Palestinians’ understanding of the American political landscape and U.S. policy and included meetings with a wide array of American journalists, activists, and U.S. officials, both in the administration and on Capitol Hill. But it was also an opportunity for the Palestinians to tell their own stories about life under occupation — a point underscored by the timing of their visit. Donning makeshift pins adorned with a photo of Shireen on their lapels, the Palestinian journalists used the visit as an opportunity to convey their sadness and anger at the loss of their colleague as well as the dangers of reporting and living under Israeli military occupation directly to U.S. policymakers. “Our visit is the perfect embodiment of the Palestinian experience,” explained one of our journalist colleagues to officials at the State Department, “half of us were left behind while one of our colleagues back home was shot dead.”

Despite the many logistical challenges and the tragic circumstances surrounding their visit, it was an invaluable experience, both for the Palestinian participants and their American interlocutors. By telling their harrowing stories of life under occupation and the dangers they face as journalists, our Palestinian visitors were able to remind U.S. policymakers of the harsh conditions under which ordinary Palestinians live while honoring the memory of their friend and colleague, Shireen Abu Akleh.

﻿Khaled Elgindy is a senior fellow at the Middle East Institute where he also directs MEI’s Program on Palestine and Israeli-Palestinian Affairs. The opinions expressed in this piece are his own.