How to Overcome the Pitfalls of the Saudi-Iran Dialogue 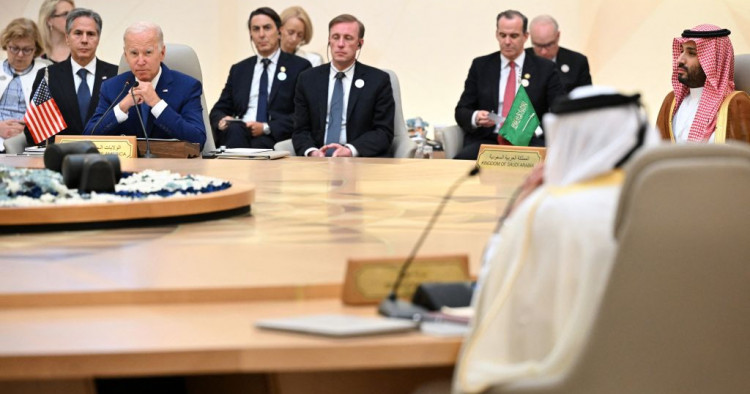 The article excerpted below was co-authored by James Jeffrey of the Wilson Center and MEI's Bilal Saab. Read the full article on Lawfare.

As British Prime Minister Harold Macmillan wisely said in 1958, “jaw-jaw is better than war-war.” In foreign policy, or in everyday life, talking is better than fighting. But what if jaw-jaw accomplishes little, or worse, potentially backfires?

The direct talks between Saudi Arabia and Iran, two longtime rivals, might seem at first glance to signal another significant shift in the increasingly fluid politics of the Middle East that has followed the 2020 Abraham Accords and U.S. President Joe Biden’s July 2022 visit to the region. These talks—which in principle we support—have largely disappointed. The negligible progress at the negotiating table is rooted in Iran’s and Saudi Arabia’s disparate goals and regional positions.

Talks between rivals tend to fall into two categories: the transformational and the transactional.

Transformational talks are meant to resolve underlying conflicts, either through compromise or force majeure. Germany’s rapprochement with France, culminating in the 1963 Elysée Treaty between German Chancellor Konrad Adenauer and French President Charles de Gaulle, is one such example. Another is the U.S. negotiations with Japan in 1945 after the United States dropped atomic bombs on Hiroshima and Nagasaki, which led to the surrender of Japan.

Transactional talks, by contrast, seek to manage the details of, or gain tactical advantages within, a conflict. An example would be the U.S.-Soviet negotiations on arms control throughout the Cold War. These talks were never expected to lead to a resolution of the underlying ideological conflict, then hardwired into the global system, but rather to make that conflict more predictable, minimize the risk of undesirable “black swan” catastrophes, and avoid misunderstandings.

Both types of talks can be useful. What is crucial, though, is not to confuse one for the other. And that brings us to Saudi Arabia and Iran.