Iraq in 2019: Protests, politics, and a struggle for power 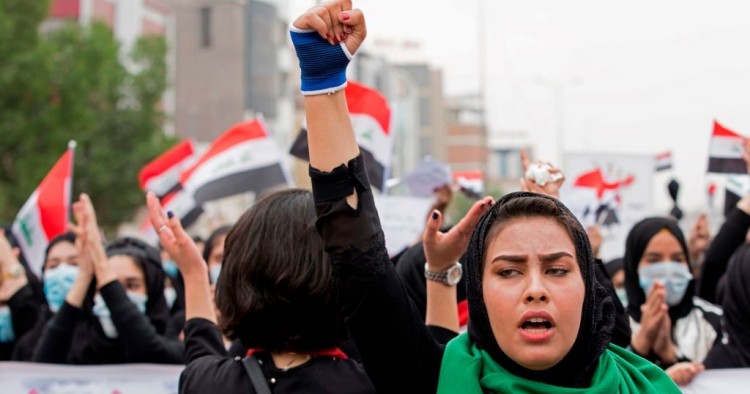 Iraq is ending the year facing the most significant challenge yet to its post-2003 political order. The objective of the protests that started at the beginning of October is not to reform the political order through negotiations with the parties in power since 2003. The protestors are demanding a radical change of the ethno-sectarian power-sharing system, known as the muhasasa, that was put in place after the 2003 U.S. invasion of Iraq. Not even Grand Ayatollah Ali al-Sistani, long revered by Iraqis as their religious leader and seen as having played an important role since 2003 in safeguarding Iraqi national interests, has escaped criticism. The protesters criticized him for not speaking out earlier against the killing of more than 650 protesters and wounding of thousands. The roadmap for change the protestors have put forward has so far centered on the resignation of the prime minister, appointment of a new prime minister and technocratic cabinet, and introduction of a new election law according to which early elections will be held. Unlike the 2015 protests that were co-opted by the Sadrists, this protest movement has so far proven to be immune to cooptation by the political parties. It remains leaderless, cross-sectarian, and non-ideological.

In 2019, ISIS continued to solidify and expand its command and control structure in Iraq, mostly operating in ungoverned spaces in northern Iraq along the dividing line between Kurdish Peshmerga forces on one side and the Iraqi army on the other side.

Baghdad-Erbil relations witnessed a major improvement in 2019. Negotiations between the two sides led to an oil-for-budget agreement under which the Kurdistan Regional Government (KRG) would hand over 250,000 barrels of oil per day to Baghdad in return for a guaranteed share of the federal budget. The agreement was announced on Nov. 27, and two days later Prime Minister Adel Abdul-Mahdi, who has always enjoyed close relations with the KRG leadership, resigned. Given the political instability in Baghdad, the future of the deal is now in doubt, along with the KRG’s hopes of staving off economic collapse, as it finds it increasingly difficult to deal with an estimated $17 billion debt.

The Iraqi prime minister did not succeed in bringing Iran-linked Popular Mobilization Units (PMUs) under control. Seven to eight of these large militias operate outside state control and in parallel to Iraqi security forces. Executive orders issued by the prime minister’s office to integrate them into the security forces and bring their weapons under state control were not heeded. These militias now stand accused by Iraqi protesters of leading the violent crackdown against them. Along with a prevailing sense among Iraqis that Iran is wielding its soft and hard power to control the decision-making process in their country, the PMUs bear part of the responsibility for Iran’s shrinking political capital in Iraq. As more violence is wielded by Iran-linked groups to stop the protests, Tehran’s standing with Iraqis, the majority of whom are Shi’a, will continue to suffer.

Throughout 2019, Iraqi officials worked to bring the country back into the Arab neighborhood. In his first foreign trip in March 2019, Prime Minister Abdul-Mahdi traveled to Cairo for a tripartite summit with Jordan on measures to strengthen economic cooperation. In April, 13 agreements and memoranda of understanding were signed with Saudi Arabia to promote cooperation on security, trade, and energy, along with Riyadh pledging $1 billion for the construction of a sports city, as well as four consulates. To date, Arab countries including Saudi Arabia have remained on the sidelines of the ongoing power struggle in Iraq.