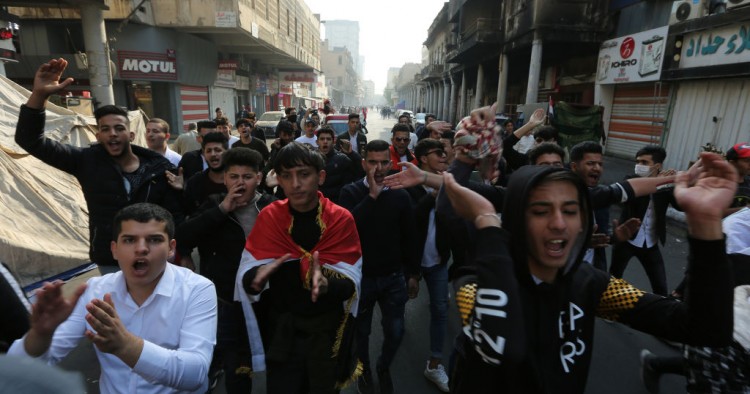 Iraq’s protests are not showing any sign of subsiding, with security officials describing yesterday’s violence in the southern provinces as the worst day yet. Iraqi officials are pursuing a three-pronged strategy of meting out violence in the hope of forcing people off the streets, shutting down media outlets that are not pro-government to control the narrative about the uprisings, and having Parliament review electoral reform legislation, partly in response to Grand Ayatollah Ali al-Sistani’s demand to speed up electoral reforms in preparation for early elections and partly to show they are serious about responding to protesters’ demands.

On Saturday, U.S. Vice President Mike Pence made an unannounced visit to al-Asad Air Base northwest of Baghdad, followed by a trip to Erbil for a meeting with the president of the Kurdistan region in Iraq. In lieu of a meeting with Prime Minister Adel Abdul-Mahdi in Baghdad, Vice President Pence held a 25-minute telephone conversation with him, during which Iran, the protests in Iraq, and U.S.-Iraq relations were discussed. White House officials do not hold a positive view of Mr. Abdul-Mahdi, who they perceive as too close to Iran. Leaked Iranian intelligence cables discussing the “special relationship” between Mr. Abdul-Mahdi and the Islamic Republic of Iran lend credence to their suspicions. Unlike his predecessors, he has yet to visit the White House. Recently, his decision to lend political cover to the violent suppression of the uprisings by Iran-linked armed groups further solidified their view.

Rumors abound in Baghdad of a military coup. The Iraqi Counter-Terrorism Service (CTS) had to issue a denial of news posted on their website of a planned military coup, saying their account was hacked. Setting aside the absurdity of any party announcing it is planning a coup ahead of time, the fact that CTS had to issue an official denial speaks volumes about the current state of mind of the political elites in Baghdad.

Although more than 300 Iraqis have died to date and close to 16,000 have been wounded, protesters are not going home. Yet, most of the ruling clique is still rejecting the idea of forcing the prime minister to resign, citing fears of a security vacuum in the aftermath that would lead to a civil war between the protestors and pro-status quo forces, the great majority of both camps being Arab Shi’a.

Two parliamentary blocs led respectively by Muqtada al-Sadr and former Prime Minister Haider al-Abadi are calling on the leadership of the Council of Representatives to schedule a session to question the prime minister about the use of force against the protesters ahead of a push by these blocs for a vote of no-confidence in the government.