It’s not about Assad 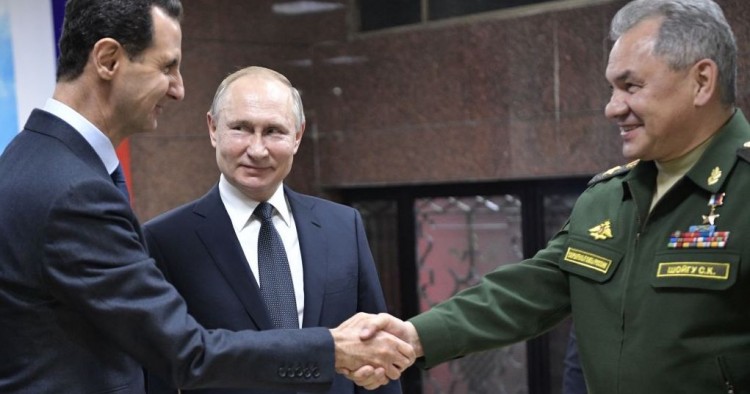 Russia’s alleged displeasure with Bashar al-Assad and Iran in Syria has gotten a lot of attention recently in Western and some Arab media. The critical reports on the Syrian president in the Russian information space are certainly notable, but, if taken at face value, may be both confusing and misleading for policy makers.

Essentially, there are two issues at play here. One has to do with the sourcing of the reports, and the other with the very nature of this discourse in Russia.

On the first issue, the reporting in the English-language media on Russia’s apparent distancing from Assad is based primarily on three sources: first, the exposure of corruption within the ruling Syrian elite by the Federal News Agency (FNA), a media outlet owned by Yevgeny Prigozhin, aka “Putin’s Chef,” who also runs the notorious “troll factory” and the mercenary Wagner Group; second, citations of a report by TASS, Russia’s largest state-run news agency; and third, references to a report by the Russian International Affairs Council (RIAC), a well-established think tank with links to the Russian Foreign Ministry.

When scrutinized, however, it turns out that at the same time the FNA criticized those close to President Assad, another Prigozhin-affiliated company delivered 10,000 COVID-19 tests, 1,000 pieces of protective gear, and 50 ventilators to Syria. So if the Kremlin was indeed trying to deliver a message to Assad via one of its shady intermediaries such as Prigozhin, that message was at least more nuanced than one would conclude from those “critical reports.” Diving deeper into the game that the Kremlin is playing in Syria through Prigozhin requires unique insights into that relationship — and those who have access won’t discuss it, and those who discuss it usually don’t have access.

The other two “reports” that became the main sources of speculation over Russia’s mood regarding Syria were in fact initially aired by English-language Arab media, which in turn misinterpreted what appeared in the Russian press. First, RIAC has never published any “report” critical of Assad, but what the Middle East Monitor (MEMO) was likely referring to was an op-ed piece by RIAC Vice-President Amb. Alexander Aksenyonok in Kommersant, a reputable national daily newspaper. The op-ed, titled “Damascus should be assessing the risks adequately,” was a shrewd analysis of where things stand in Syria and called on the Syrian government to stay away from policies that could further complicate the situation. Instead, it was presented as RIAC’s official position — and, by extension, a sign that Russia’s Foreign Ministry was losing patience with Assad. Finally, TASS itself dismissed ever publishing the report that MEMO referred to. All of the above suggests that there was no criticism of either Assad or Iran in the Russian state media or by a Russian official — a line the Kremlin is cautious not to cross. What came to be presented as “Russian criticism” is rather a combination of wishful thinking and a lack of attention to details that are incredibly important in this delicate context.

That said, the general impression one gets from these accounts — that there’s something brewing in Moscow vis-à-vis its policies in Syria — is not entirely incorrect. Long-time Russia watchers know all too well that Moscow has always been preoccupied with the weighting of its odds with Assad. What has complicated the situation lately are two key uncertainties: first, the implications of COVID-19 for Syria and the broader region; and second, the outcome of the recent internal spats within the Syrian ruling elite (namely Rami Makhlouf’s messages to Assad). Both may have serious consequences for the Kremlin’s policies in the mid-term and Moscow has adopted a wait-and-see approach on how both may unfold.

At the same time, different Russian outlets and analysts are publicly debating the best possible options for Russia in this situation. This often gets interpreted as the Kremlin's official position, but instead should be seen as an attempt to talk through and probe public attitudes vis-à-vis different scenarios, including those where Russia ratchets up its criticism of Assad. The illicit dealings of the Syrian president and his cronies have long been an open secret, and there’s no illusion in Moscow about the fact that they impede Russia’s efforts to advance a political process and attract reconstruction funds. In this sense, Russia would indeed want the Syrian elites to do some of their own heavy lifting. Yet saying that Moscow is having a change of heart at this very moment, let alone is willing to publicly broadcast this to Damascus, may be a bit premature. After all, it's not about Russia’s attitude toward Assad, it’s about the future of Russia’s presence in Syria and the pursuit of new pillars of this policy in the post-COVID-19 Middle East.