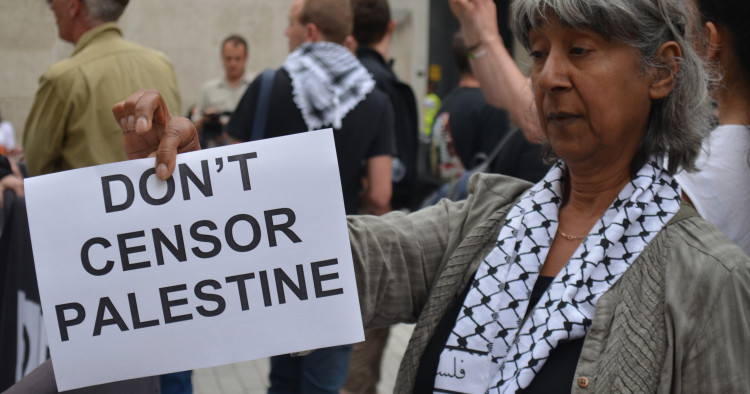 In a landscape of suppression and retaliation against Palestinian journalists and activists at the hands of Israel, social media networks have been at once critical organizing platforms and tools for exacerbating censorship.

Since the crisis around the pending expulsions in Sheikh Jarrah began in early May, Palestinian activists and their supporters abroad have raised the alarm about numerous instances of their social media posts, hashtags, and accounts being removed, shut down, or otherwise restricted. MEI’s Cyber and Palestine programs jointly hosted a two-part webinar series examining this phenomenon. This series raised questions about the role of major tech companies such as Facebook, TikTok, Instagram, and Twitter in deepening the already substantial power imbalance between Israelis and Palestinians, and the ways in which the censorship of Palestinians and activists for Palestinian rights contributes to ongoing cycles of occupation, displacement, and injustice.

These measures are often rooted in ignorance and a lack of understanding of the nuances of the conflict. For example, Ignacio Culebras of the Committee to Protect Journalists pointed to the sites’ confusion about Al-Aqsa Mosque, which was flagged as an institution affiliated with Hamas rather than one of the holiest places in Islam. These inaccuracies and misrepresentations, often targeted under the State Department’s opaque “Dangerous Individuals and Organizations” policy, have real consequences for violence against Palestinians and proliferation of anti-Palestinian messaging on social media and search engines. In a region where quality citizen journalism is a critical resource, the posts of activists like Muna and Mohammed El-Kurd have reached millions worldwide, providing a more nuanced understanding of the occupation and power disparity in Palestine. The apparent efforts by major tech corporations to suppress such voices are indicative of an online culture shift on these issues.

This problem is not unique to Palestine, nor is retaliation against those speaking up for Palestinian rights new; journalists and activists documenting human rights violations across the MENA region have faced similar content restrictions on social media sites on which they rely to spread critical information. Prominent Palestinian activists and organizations like 7amleh point to the content moderation policies of social media networks that rely on artificial intelligence and other algorithms, which are often skewed in their enforcement in terms of who and what they target. Mona Shtayyeh of 7amleh discussed the lack of updated information relating to checkpoints listed on Google Maps, a failure which impacts the daily lives of Palestinians and is not in keeping with international law.

In terms of solutions that tech companies could take to address these issues, MEI’s speakers referred to policy changes including better interpretation of Arabic translations, limits on the use of automation in monitoring activist language, and increased transparency with regard to how such language is monitored by content moderation policies. Speakers also pointed to the role of news organizations and journalist unions globally in pushing back against institutional barriers to voicing support for Palestinians. While activism on social media has had a tremendous impact in raising awareness globally for Palestinian liberation, censorship in the digital space makes evident that there remains a need for greater transparency and equity in online platforms.