Palestinian refugees can no longer be sidelined 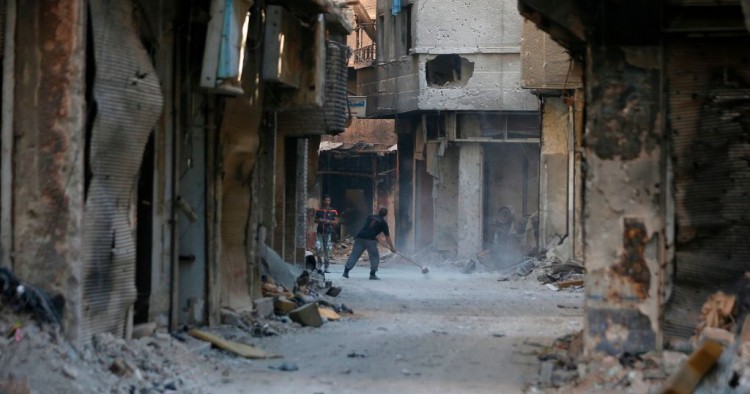 On Dec. 3, MEI’s Program on Palestine and Palestinian-Israeli Affairs convened a webinar on the future of Palestinian refugees and their place in the policy discourse following the election of President-elect Joe Biden and the departure of the Trump administration. Below is a summary of the major takeaways from the event, organized by topic.

Watch the webinar, Palestinian Refugees Beyond the Trump Era, here.

Mattias Schmale, director of field operations for the United Nations Relief and Works Agency (UNRWA) in the Gaza Strip, gave a sobering update on the public health crisis Palestinian refugees in Gaza are facing during the global COVID-19 pandemic. “The latest trends are really extremely worrying. We’ve had over the past few weeks a steep rise in daily infections, between 700-800 daily. We now have 122 people dead. Keep in mind here in Gaza, the prison-like conditions make it like a cruise ship, and we know what has happened on cruise ships when there’s an outbreak. Part of the impact of the blockade is that the health sector is collapsing. What my WHO colleagues are saying, is if we can’t turn this around together, we are two weeks away from hospitals reaching maximum capacity.”

Schmale also spoke of how the majority of Gaza’s population, including the Palestine refugees UNRWA has a responsibility to, depend on daily income to make ends meet: “This constant battle between public health considerations and economic considerations, this is all happening in the 14th year of blockade with Gaza and its population on its knees.”

Dalya Al-Masri, Palestinian-Canadian journalist, spoke of the right-ward shift of American politics under Donald Trump. She says that the so-called “Deal of Century” purposefully left out Palestinian refugees and its authors are explicitly against the Palestinian right of return for refugees. “When I look to a future Biden administration come January, I think of Biden’s previous political engagements. … We know that Obama was against the Palestinian right of return while Biden has so far remained quiet.”

Al-Masri said she was looking to Democratic members of Congress to push for more rights for Palestinians, beyond humanitarian aid, which she says has been heavily conditioned by the United States. There is an opportunity under the Biden administration to return to the liberal peace process stance, which means there will be a lot of work to be done to shift the status quo and challenge the Israel lobby, including on the subject of Palestinian refugees.

“Unfortunately, in DC, this issue is completely ignored, and not because policy makers do not know, but because there is a deliberate policy to delete this issue from the agenda. Even in speaking about funding UNRWA, the political attacks targeting UNRWA are not just about defunding its humanitarian assistance but because UNRWA continues to be one of the few international institutions dedicated to supporting Palestinian refugees, while the Israeli government’s policies under Netanyahu and the U.S. government under Trump are designed to disregard all international law references and frameworks, including frameworks about annexation, occupation, and refugees.”

Jarrar believes that more conversations are necessary to bring Palestinian refugees back on the policy radar and for their importance to be appreciated in the broader context of the Israel-Palestine issue. After all, Jarrar concludes, how can a just resolution to the conflict be reached without including half of the Palestinian population?

Schmale addressed some of the common misconceptions about UNRWA rooted in myths and theories about “Palestinian exceptionalism” as a refugee population. Schmale went on to deconstruct many of the arguments leveled against UNRWA in comparison to its counterpart, the United Nations High Commissioner for Refugees (UNHCR), most of which are rooted in ignorance and a lack of understanding.

For example, there is the myth that Palestinian refugees are the only refugees who pass on their refugee status to their children, a claim made most recently by former U.S. ambassador to the U.N., Nikki Haley. “There are striking similarities between how UNRWA approaches Palestinian refugees and how UNHCR approaches all other refugees. One of those is that it is simply not true that UNRWA is the only organization that has refugee status across generations. If you go to the issue of Ethiopian or Eritrean or Afghan refugees, there are refugee populations where the refugee status is carried through generations until the issue is resolved.”

According to Schmale, dissolving UNRWA or bringing Palestinian refugees under the jurisdiction of UNHCR, as some are now calling for, would not actually solve the Palestinian refugee problem or make it disappear, as many now believe. “UNHCR has a three-tier approach to resolving a refugee crisis,” explained Schmale. “The first is to return them home. So, in those terms … [if we] go ahead and hand over the issue [of Palestinian refugees] to UNHCR, the first thing they will do is look at right of return. That’s very clear. The second issue if return doesn’t work is integration where they are. The third approach is repatriation to a third country. Again, let’s find a country willing to take 5 million refugees and integrate them into their country.”

In sum, Schmale reiterated his view that the attacks against UNRWA are unfounded, adding that “the discussion shouldn’t be about what UNRWA does and doesn’t do. … The way to end UNRWA is not to defund it, but to create a political solution as was promised more than 70 years ago.”