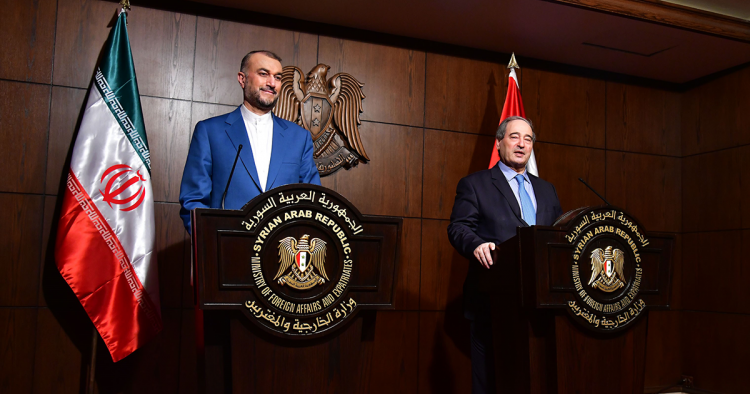 This article was co-authored by Shadi Martini and MEI Non-Resident Scholar Marjan Keypour Greenblatt for the National Interest.

In 2013, following Syria’s two-year-long repression of democracy activists, President Barack Obama declared that President Bashar al-Assad “has lost his legitimacy” and “will be held accountable.” “I think Assad must go,” Obama continued. In the years that passed, Syrian diplomats in suits met their counterparts in posh offices, attended conferences and conventions, posed and paraded before various flags while pro-Assad forces arrested, tortured, and executed innocent civilians. Nearly a decade has passed since that hollow statement and Assad remains the tyrant of Syria, supported by his patrons in Iran and Russia.

Also in 2013, politicians in Washington were entranced by the election of Hassan Rouhani as Iran’s president and his “charm offensive.” Seeing him as a “moderate” who would accompany the West on a path of denuclearization of and diplomacy with the Islamic Republic. Yet, during his eight-year tenure, the Iranian regime arrested, tortured, and executed thousands of citizens. All the while, Iran continued to menace its neighbors, and today, it stands on the verge of developing a nuclear weapon.

There are three takeaways from the chaos and bloodshed in Syria and Iran:

Dictators are not diplomats. Traditional practices of diplomacy must be adjusted when dealing with dictators because, well, dictators don’t abide by global norms; they set their own rules. The sole priority of dictators is survival and to do that, they will transgress any moral code and violate any treaty. As seen in Syria and Iran, this includes killing their own people and fomenting chaos to bolster their own standing. In a scheme to likely create new hysteria to cover the public outrage, the overcrowded Evin prison, where political prisoners—including ethnic, religious, gender, and sexual minorities—convicted of “enmity against God” and dual national prisoners are detained, was suspiciously set ablaze on October 15. The Iranian regime finds justification for any act of violence or mayhem. Dictators who seek absolute power can never act in good faith with diplomats from democracies where people have the power.