There Is No Indo-Pacific Without Egypt and the Suez Canal 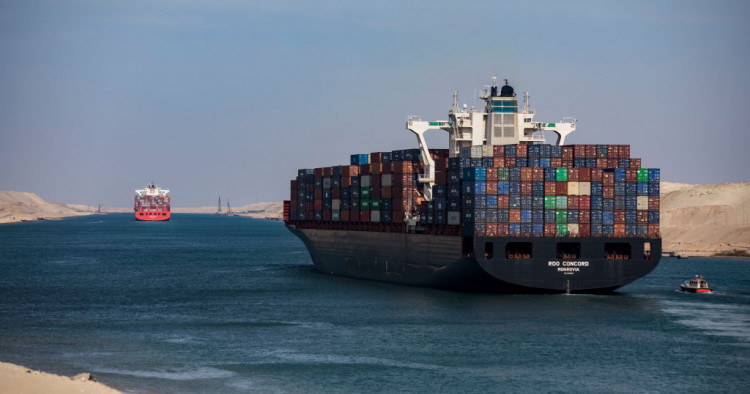 The world is slowly emerging from the Suez Canal saga, where the Ever Given vessel was stuck in the narrow southern lane of the Canal for six days, disrupting global trade in a time of critical economic recovery. The Suez Canal, similar to the Straits of Malacca, is a choke point that handles 12 percent of global trade, 10 percent of world oil, and 8 percent of the global liquified natural gas (LNG) flows. The stranded Ever Given vessel held up trade valued at $9.6 billion along the canal each day. The incident sent shock waves across the map, sparking enormous discussions about supply chain resiliency and giving strategists a preview of what could happen if conflict in Asia escalates and Malacca is shut down. The West should take notice. Undermining the city of Suez as a cornerstone in global trade and geopolitics would eventually undermine the West in the era of great power competition with China and Russia.

No East of Suez if there is no Suez

The strategists behind Washington’s Pivot to Asia, London’s Tilt to the Indo-Pacific, and Paris’ and Berlin’s strategic views on the Indo-Pacific ignored the Suez Canal’s centrality to their strategies. Former National Security Advisor John Bolton argues that “this [Suez Canal incident] is not merely about geography, but also about today’s broader political risks to world commerce, ranging from one errant ship at Suez to confronting China’s enormous political, military and economic challenge.” The integration of the canal into Western powers’ strategies towards the Indo-Pacific is not a luxury, but a necessity in a time of great power competition.

Suez is at the Forefront of West’s Military Footprint

In addition to the commercial significance of the canal, Suez is a geostrategic cornerstone to the U.S. military strategy in the Mediterranean Sea, the Red Sea, and the Arabian Gulf. Thanks to military cooperation with Egypt, the United States benefits from a preferential treatment in which the country’s naval ships get priority pass in the Suez Canal, avoiding a lengthy wait time in the Mediterranean or the Red Sea. Following last month’s blockade, the U.S. navy offered to help the Egyptian authorities to refloat the Ever Given vessel—eventually, Egypt succeeded in refloating the behemoth ship on its own before the arrival of help.

With the increasing emphasis on the Indo-Pacific and a broader U.S.-EU alignment on China, the Suez Canal will play another important role in the transit of the American and European naval vessels from the Mediterranean Sea into the Indo-Pacific theater. Following the refloating of the vessel, Admiral John Kirby, assistant to the U.S. Secretary of Defense for Public Affairs, said “I wouldn’t go so far as to say the Suez blockage has caused us to rethink anything about how we are postured in the Middle East or how we meet mission requirements there, our national security interests there.”

Egypt as Operator, Not a Partner

The canal’s operator, Egypt, is one of the eighteen non-NATO ally states to the United States— a list that includes Australia, Israel, Japan, South Korea, Taiwan, Brazil, and Singapore. However, since the end of the Cold War, Cairo has been primarily seen as a local operator of the international chokepoint, rather than a strategic partner that needs accommodation and integration into a wider geostrategic and geo-economic vision. The exclusion of Egypt from this ecosystem, and Egypt’s dire need for economic development, has pushed Cairo to look eastward toward Beijing.