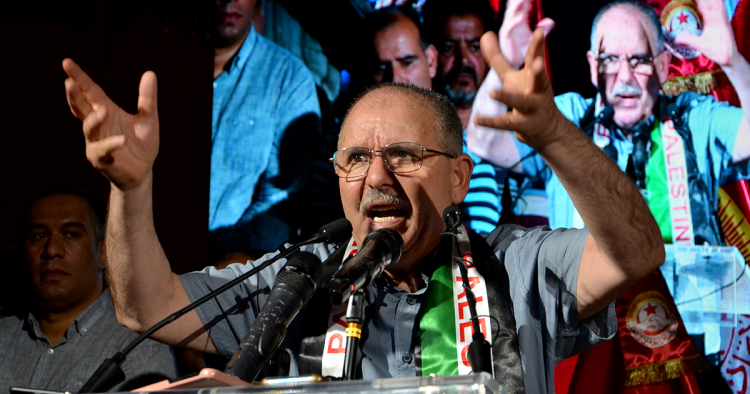 Following the failure of negotiations on June 13 between Tunisia’s powerful labor confederation, the Tunisian General Labor Union (UGTT), and the Tunisian Ministry of Social Affairs that the government hoped would forestall a public-sector strike, the UGTT is moving ahead with plans to hold a general strike on June 16. The head of the million-member-strong confederation, Noureddine Taboubi, told a meeting on June 12 that there would be a strong show of support for the strike; one of his aides asserted that a quarter-million employees in public-sector offices would stop work. Such a strike would be the biggest challenge to President Kais Saied since he assumed full control of the Tunisian government last July. Allies of the president already are challenging Taboubi’s legitimacy as leader of the labor confederation.

The labor confederation’s leaders insist that the strike has only economic and social demands. They criticized Saied’s government for not including it in decision-making on an economic reform program. In particular, the confederation opposes the emerging program the government has negotiated with the IMF that would cut subsidies and freeze public sector salaries in return for about a new IMF loan of about $4 billion. The Tunisian government’s budget deficit is approaching 10% of GDP, and the finance minister last week affirmed that major subsidy reform is necessary. The labor confederation, however, demands a substantial salary increase to help its members cope with inflation approaching 8% annually. It also denounces any thought of privatizing public-sector companies.

Taboubi insists the strike has no political aim, but the labor confederation has also denounced Saied’s sham consultations for the proposed new constitution. While Taboubi has no sympathy for political Islamists, he has urged the government to meet with opposition political parties before it moves ahead with its July 25 referendum on the new constitution. Labor leaders have also denounced government interference in the confederation’s internal affairs, and Taboubi on June 12 warned against outside efforts to harm its unity. President Saied is firmly moving ahead with his referendum. Thus, he faces a major confrontation with the labor confederation on the government’s economic and political programs, starting with the public-sector strike on June 16.

Amb. (ret.) Robert S. Ford is a senior fellow at the Middle East Institute (MEI), where he writes about developments in the Levant and North Africa.

MEI is an independent, non-partisan, non-for-profit, educational organization. It does not engage in advocacy and its scholars’ opinions are their own. MEI welcomes financial donations, but retains sole editorial control over its work and its publications reflect only the authors’ views. For a listing of MEI donors, please click here.