Turkish-backed Syrian armed opposition groups to unite under one banner 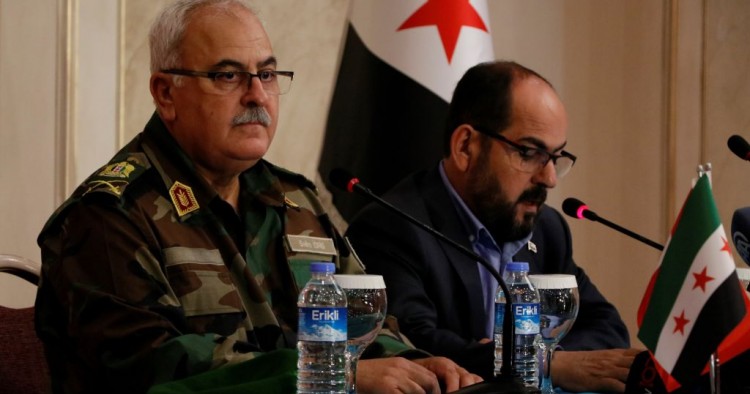 After a long-drawn-out series of negotiations, Turkey has successfully convinced more than 40 armed opposition groups in northern Syria to unite under a single umbrella, directly under the command of the Syrian Interim Government’s (SIG) Ministry of Defense. In a press conference in the Turkish border city of Sanliurfa, SIG President Abdurrahman Mustafa announced the amalgamation of the Idlib-based National Liberation Front (NLF) into the Syrian National Army (SNA), whose forces until now had been based in northern Aleppo. Collectively, this array of forces likely numbers at least 35,000 full-time fighters, all under the near-total control of Turkey’s Ministry of Defense and National Intelligence Organization (MIT).

In some opposition circles, the announcement has been met with fanfare and in others, with skepticism. The press conference was a hurried and chaotic affair, with little Syrian opposition (Arabic) media presence. There appears to have been little if any consultation with NLF commanders inside Idlib, whose willingness to affiliate with the SNA remains to be seen. But the micro details behind the unity initiative and rightly skeptical assessments of how realistic actual unity is are mostly academic. By all accounts, the announcement was rushed for reasons of Turkish national security expediency, to enhance its leverage within two simultaneously intensifying crises: first and foremost in Idlib and secondarily in Syria’s northeast. This was less about fine tuning the management of armed opposition groups and much more about strengthening Turkey’s hand in geopolitical equations.

In Idlib, Turkey faces a ticking clock controlled by Russia, which expects Ankara to (1) demonstrate progress in distinguishing between “reconcilable” and “irreconcilable” elements and (2) to begin cracking down on “terrorists.” Until now, neither issue has been seriously tackled, never mind resolved. For two years, Turkey’s MIT has sought to manipulate dynamics in such a way as to exert greater influence over the area’s dominant faction, former al-Qaeda affiliate Hayat Tahrir al-Sham (HTS). For a time, MIT’s objective appeared to be to split HTS into “reconcilable” and “irreconcilable” parts, but more recently, its demand has been for HTS to dissolve and merge into the NLF or a similar umbrella. Though it has displayed more flexibility, HTS has consistently refused MIT’s demands. The merger of the NLF under the SNA umbrella is Turkey’s final gambit — its last gasp attempt to demonstrate HTS’s isolation from the Syrian mainstream, thereby revealing its potential vulnerabilities. However, neither Turkey nor the NLF/SNA are likely to turn on HTS anytime soon. What is more realistic is that this latest Turkish maneuver may help to induce HTS to cooperate — openly or covertly — in a shadow campaign targeting al-Qaeda loyalists, in particular al-Qaeda’s new affiliate in Syria, Tanzim Huras al-Din (HaD). That would go some way to assuage Russian concerns, while also playing to newfound American worries about HaD’s intentions regarding external attacks.

Beyond Idlib, Turkey has also reverted back to threatening a cross-border military operation into northeastern Syria, to target the Syrian Democratic Forces (SDF), America’s ally in the fight against ISIS. Though the security mechanism agreed in August has stabilized the border region until now — the third joint ground patrol happened today, Friday — Turkey recognizes that the U.S. has fewer cards to play in this game of “negotiation-by-threat” (any Turkish attack would not draw a response from American troops, thereby creating conditions in which an American departure from Syria would become all but inevitable). Therefore, expanding the scale and scope of the SNA — which until now has been its frontline force in two major anti-SDF campaigns — by incorporating (even if only on paper) Idlib-based factions that are far more battle-hardened, is designed to reinforce Ankara’s leverage yet further.

Turkey’s aggressive rhetoric on Syria consistently plays upon its exertion of influence over both civilian and military communities. As of today, Ankara governs — directly and indirectly, in Syria and at home — more Syrian citizens than the Assad regime itself. In northern Syria, Turkey’s military and intelligence apparatus commands a combined fighting force that rivals that of the SDF and Syria’s state-controlled Armed Forces. Moves like the one we witnessed today are aimed at reinforcing those claims of legitimacy, more than they are necessarily about changing granular intra-opposition dynamics.