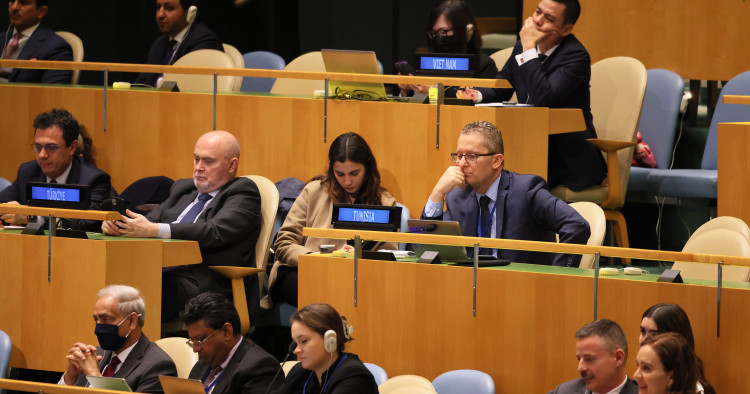 The recent, Dec. 30, vote at the United Nations General Assembly (UNGA) regarding Israel — approving a request for the International Court of Justice (ICJ) to offer a legal opinion on Israeli policies in the West Bank — reflected once again that the international community does not generally accept the Israeli narrative regarding the Palestinian issue.

It also highlights that the Palestinian issue, while not a top priority on the global agenda, is still one of concern to many in the international community. And while it is true that most countries are not presently motivated to translate this concern into action, by casting their votes in the U.N., they can catalyze processes that could eventually result in concrete policy implications.

Countries and international organizations that were supportive of the Lapid-Bennett government (June 2021-December 2022) and refrained from excessive criticism of its policies pertaining to the Palestinian issue, are not willing to do so in the context of the new government, headed by Benjamin Netanyahu, that took power at the end of December. The government’s composition and declared intentions are problematic enough, and criticism and warnings were voiced even prior to any governmental action being taken.

Last week’s UNGA vote showed that even countries aligned with Israel on multiple issues — including its new regional allies, the United Arab Emirates and Bahrain — may still vote against the Israeli position when the Palestinian issue is on the line in international fora. Still, U.N. votes are often declaratory in nature with few long-term consequences, and should not necessarily be taken for granted as reflecting genuine foreign policy priorities.

Nevertheless, the votes by the European Union member states — a larger number of which abstained or backed the Israeli position compared to previous votes — is noteworthy, especially in the context of the new Israeli government’s harsh criticism toward the EU. Eleven member states supported the Israeli position, nine abstained, and only seven voted against it. Future votes will indicate whether this is a new pattern of behavior or a unique event.

The United States’ vote in support of the Israeli position represented continuity. The Biden administration is in an early phase of articulating its policy and conduct vis-à-vis Israel’s new government. Only after the anticipated series of high-level mutual visits and meetings takes place over the coming months, and once the actual policies of the new Israeli government become clearer, can we expect a coherent updated American policy to emerge. However, whatever form this new policy takes, it is not likely to be reflected in voting patterns at the U.N.

Israel aggressively rebuked the UNGA vote, showcasing the diplomatic tone that we can expect from the new government going forward. It reflected a return to the kind of rhetoric employed by previous Netanyahu governments — reflexively labeling criticism of Israeli policies as “anti-Israeli,” supportive of terrorism and boycotts, and de-legitimizing of Israel as a sovereign state.

The Israeli response attacked the U.N. as a whole and reproved the Palestinians for raising the issue in this forum. Though of course, in practice, the vote represented the positions of independent countries.

Such severe Israeli rhetoric reduces the space for dialogue with legitimate critics on actual policy differences that exist — a basic pillar of diplomacy. By doing so, it weakens Israel’s global standing rather than reinforces it. Netanyahu’s confrontational foreign policy approach has distanced Israel in the past from its traditional allies and partners in the liberal democratic camp, and it is likely to do so again.

Instead, the Israeli government would do well to engage constructively with its critics and provide clarity on its intentions regarding the settlements and the Palestinians as well as regarding its desired solution to the Israeli-Palestinian conflict. Are we heading toward annexation? Permanent occupation? Or perhaps territorial compromise and a two-state solution, after all?

The international community can also seek answers from Jerusalem, not only from The Hague. Without such answers, actions like National Security Minister Itamar Ben-Gvir’s visit to the Temple Mount/Al-Aqsa Mosque compound, on Jan. 3, will speak for themselves and will be assumed to represent Prime Minister Netanyahu’s official policies.

Dr. Nimrod Goren is the Senior Fellow for Israeli Affairs at the Middle East Institute.