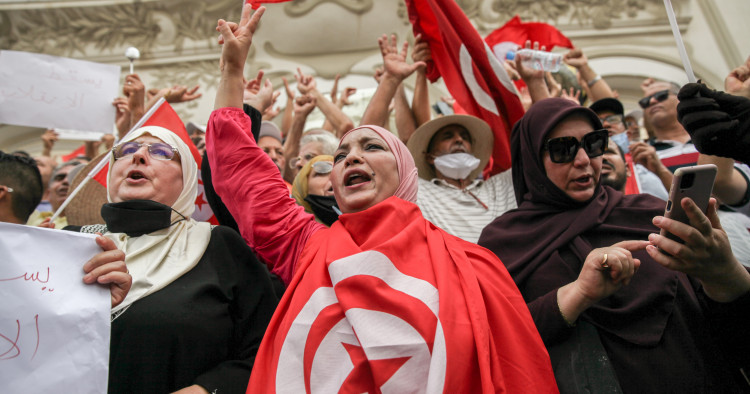 On Oct. 4, the Middle East Institute (MEI) hosted a discussion with Dr. James Zogby, president of the Arab American Institute and founder of Zogby Research Services (ZRS); Elizia Volkmann, a British freelance journalist based in Tunis; and Dr. Eya Jrad, researcher and assistant professor of security studies at the Ministry of Higher Education and Scientific Research of Tunisia. The conversation revolved around the findings of a ZRS survey conducted between Aug. 15 and Sept. 5, 2021. The poll surveyed 1,551 Tunisians about their attitudes and optimism regarding the future. The panel also explored Tunisians’ priorities for their country, the current political crisis, governance challenges, and the way forward.

The survey was conducted against the backdrop of a worsening COVID-19 situation and ongoing political instability following a series of decisions taken by Tunisian President Kais Saied beginning on July 25. The president’s moves, including sacking the government, suspending parliament, deciding to rule by decree, and appointing Najla Bouden Romdhane as the first female prime minister in Tunisia and the Arab world, have resulted in a constitutional crisis. According to Zogby, “The situation [in Tunisia] is so volatile that we would [possibly] find difference if we polled [Tunisians] today.” The political, social, and economic instability facing Tunisians has led to one of the poll’s most striking findings, with more than 70% of Tunisians surveyed saying they were better off before the 2010 revolution. What makes this finding even more notable is the stark difference in the attitudes of Tunisians polled in 2011, when 83% said they were hopeful for change after the 2010 revolution.

Tunisians’ frustration does not seem to solely stem from President Saied’s actions on July 25. In fact, opinion seems to be nearly evenly divided among those polled, with 49% approving (35% strongly approving) and 51% disapproving (only 18% strongly disapproving). Discontent among Tunisians surveyed arises from the failure of the government to address what they deem as the most urgent issues facing the country, including the pandemic, government corruption, and the economy. According to the ZRS report, “With respect to the top three issues of importance, fewer than one-quarter of respondents rate the [Mechichi] government’s performance as excellent or good (controlling pandemic: 22%, handling the economy: 13%, and ending corruption: 22%).” During the discussion, Dr. Zogby mentioned that over the last decade, the importance of democracy to Tunisians polled has paled in comparison with the aforementioned issues. When asked to rank the priority of concerns facing the country, 98% of respondents chose controlling the pandemic as very or somewhat important, while 97% said the same about both ending corruption in government and handling the economy.

Overall, the protests against Saied and the rallies supporting the president that have taken place in Tunis over the past month demonstrate the vibrant democratic culture in the country that the ZRS report describes. At the same time, Tunisia’s democratic transition and economic revival are likely to remain turbulent for an extended period before gaining greater stability and shifting the perspectives of Tunisians.

Aesha Soliman is a research assistant with MEI’s North Africa and Sahel Program and a second year graduate student in the University of Florida’s MA Political Science/International Relations Program. The views expressed in this piece are her own.