88 Days to Kandahar: A CIA Diary 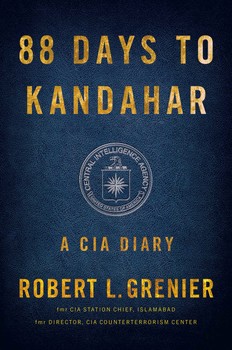 (Washington, D.C.) - The United States’ “current posture in Afghanistan is far too limited, far too timid,” said Robert L. Grenier, former director of the CIA’s counterterrorism center, at an MEI event on February 5. “We are now refusing to do what we can on a sustainable basis, and I think there will be a price to pay for that.”

In his new book, 88 Days to Kandahar: A CIA Diary (Simon & Schuster, 2015), Grenier draws from his experience launching the U.S.-led “southern campaign” in Afghanistan following the September 11 attacks and sheds critical light on the evolution of U.S. policy following the Iraq war and over the next ten years.

Grenier discussed how the U.S. strategy changed between the first invasion, during which it sought to include local stakeholders like the eventual president, Hamid Karzai, and its second major campaign against the Taliban in 2005, when it tried to lead operations more unilaterally. In the ensuing years up until today he argues that the United States has failed to strike the right balance for empowering Afghan leadership.

As Washington’s attention has shifted elsewhere to focus on the threat of global jihadists, Grenier expressed concern that Afghanistan will remain a safe haven for terrorists if the failed centralized government is unable to exert control over its provincial territories.

“For all the billions spent and lives lost,” he writes in 88 Days, “there is little to show, and most of that will not long survive our departure.”

Robert L. Grenier had a much decorated, twenty-seven-year career in the CIA’s clandestine service. A renowned Middle East expert, he has been deputy national intelligence officer for the Near East and South Asia. He organized the CIA’s Counter-Proliferation Division and headed the CIA’s basic training facility, “The Farm.” From 1999 to 2002, he was CIA station chief in Islamabad. Subsequently, he was director of the CIA’s Counterterrorism Center, responsible for all CIA counterterrorism operations around the globe. Currently, Grenier is chairman of ERG Partners, a consulting firm to businesses in the intelligence and security sector. http://robert-grenier.com/

Marvin Weinbaum (Moderator) is professor emeritus of political science at the University of Illinois at Urbana-Champaign, and served as analyst for Pakistan and Afghanistan in the U.S. Department of State's Bureau of Intelligence and Research from 1999 to 2003. He is currently a scholar-in-residence at the Middle East Institute in Washington DC. At Illinois, Dr. Weinbaum served for fifteen years as the director of the Program in South Asian and Middle Eastern Studies. His research, teaching, and consultancies have focused on the issues of national security, state building, democratization, and political economy in Afghanistan and Pakistan. He is the author or editor of six books and has written more than 100 journal articles and book chapters. Dr. Weinbaum was awarded Fulbright Research Fellowships for Egypt in 1981-82 and Afghanistan in 1989-90, and was a senior fellow at the United States Institute of Peace in 1996-97. He has been the recipient of research awards from the Social Science Research Council, the Ford Foundation, the American Political Science Association, and other granting agencies.