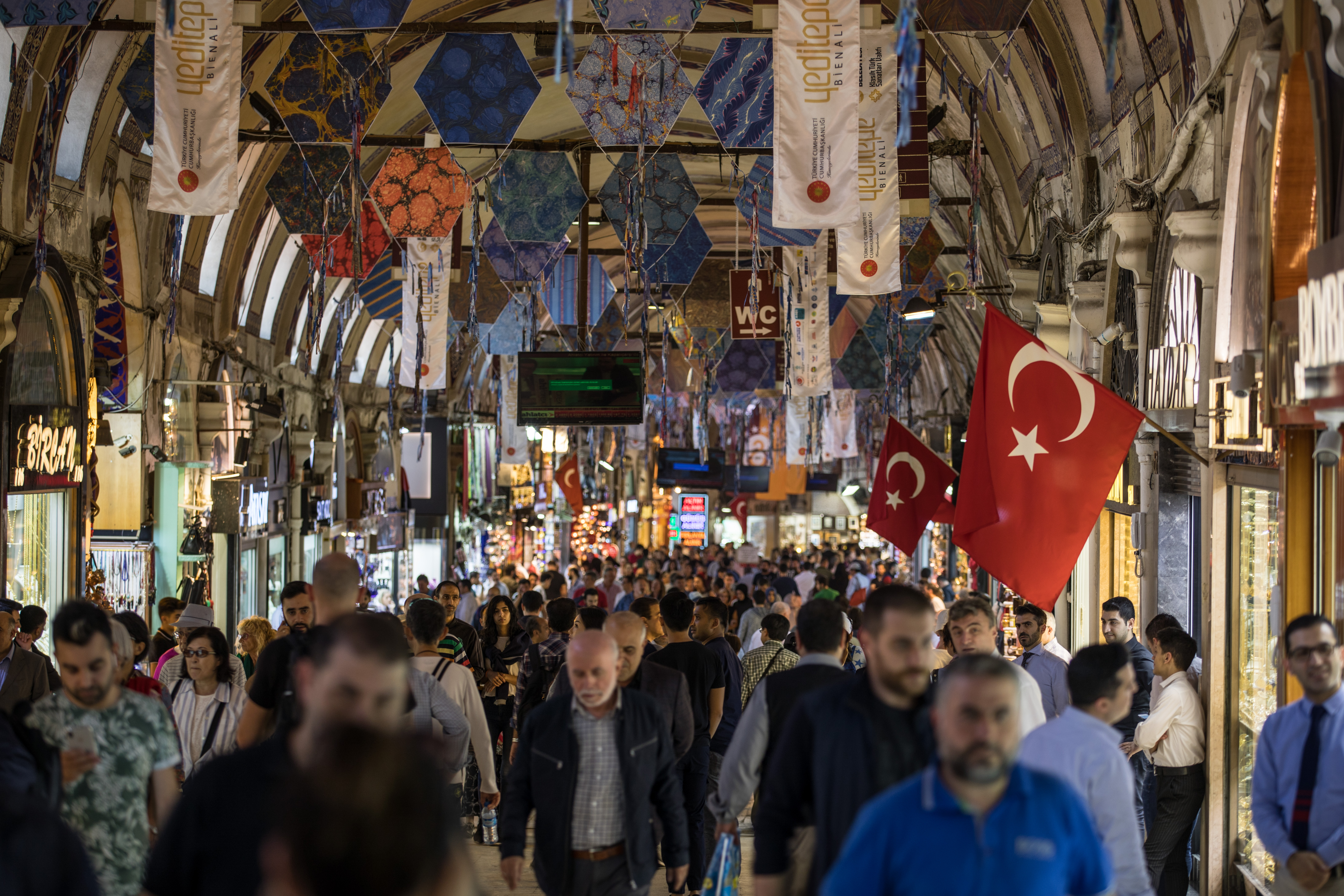 The Middle East Institute (MEI) and the Friedrich Ebert Foundation (FES) were pleased to host the 9th Annual Conference on Turkey. The conference brought together international policy makers and experts to discuss the challenges Turkey faces domestically and its relations with the Middle East and the West.

Panel I: Turkey’s Economy and Domestic Policies – In Dire Straits?

Panel II: The Future of Turkey’s Youth in a Time of Turmoil

Panel III: Too Important to Fail? Turkey’s relations with the West and the Middle East

Mustafa Akyol
Senior fellow, Center for Global Liberty and Prosperity, Cato Institute
Mustafa Akyol is a senior fellow at the Cato Institute’s Center for Global Liberty and Prosperity, where he focuses on the intersection of public policy, Islam, and modernity. A Turkish journalist and author, he is a regular contributing opinion writer for the New York Times since 2013, and has been a regular opinion columnist for Turkish publications such as Hurriyet Daily News, and for the Middle-East focused Al-Monitor.com. Akyol is the author of Islam without Extremes: A Muslim Case for Liberty; The Islamic Jesus: How the King of the Jews Became a Prophet of the Muslims; and six books in Turkish, including Rethinking the Kurdish Question.

Abdullah Akyüz
Senior advisor for Turkey, Caucasus and Central Asia, Turkish Industry and Business Association.
Abdullah Akyüz serves as an advisor to the Turkish Industry and Business Association (TUSIAD) as well as serving on the board of Is Investment, Turkey’s largest investment bank. He teaches part-time at George Washington University’s School of Business in Washington, DC and Bahcesehir University MBA program in Istanbul. He has been the author of several publications and appeared on many US, Turkish and international media outlets as commentator on issues related to finance, securities markets, US and Turkish economies, Turkish-American relations and global developments.

Sinan Ciddi
Executive director, Institute of Turkish Studies at Georgetown University
Sinan Ciddi was appointed as the fourth executive director of the Institute of Turkish Studies at the end of August 2011. Ciddi was born in Turkey and educated in the United Kingdom, where he gained his Ph.D. in political science from the School of Oriental and African Studies, University of London in June 2007. He was previously an instructor at Sabancı University between 2004-2008 and completed his post-doctoral fellowship at the same institution between 2007-2008. He recently published a book titled Kemalism in Turkish Politics: The Republican People’s Party: Secularism and Nationalism (Routledge, January 2009) focusing on the electoral weakness of the Republican People’s Party.

Knut Dethlefsen
Representative to the U.S. and Canada, FES
Knut Dethlefsen serves as the FES Representative to the U.S. and Canada. Prior to coming to Washington, D.C., he led FES offices in Warsaw, Jerusalem, and Shanghai. In between, he also served as the Department Head of the Asia and Pacific Department of the FES in Berlin. Knut has extensive experience in the United States having completed a yearlong high school exchange program in Logan, West Virginia, and later working for Senator Dianne Feinstein (D-CA) as a Legislative Fellow, advising the Senator on foreign affairs issues.Knut obtained his M.A. in History, Political Science, and Economics from the Technical University of Berlin as well as a Master of Science in Foreign Service from Georgetown University. He is a proud member of the Social Democratic Party of Germany (SPD) as well as the German service sector trade union Ver.di.

F. Gregory Gause
Professor and head of the department of international affairs, Texas A&M University
F. Gregory Gause, III, joined the Bush School in 2014 as the head of the Department of International Affairs and holds the John H. Lindsey ’44 Chair. He was previously at the University of Vermont, where he was professor of political science from 1995 to 2014 and, from 2010 to 2013, chair of its Department of Political Science. He served as director of the University’s Middle East Studies Program from 1998 to 2008. He was a non-resident senior fellow at the Brookings Doha Center from 2012-2015. Gause has focused his research on the international politics of the Middle East, with a particular interest in the Arabian Peninsula and the Persian Gulf. He has published three books, the most recent of which is The International Relations of the Persian Gulf (Cambridge University Press, 2010). His articles have appeared in Foreign Affairs, Foreign Policy, Security Studies, Middle East Journal, and The National Interest, as well as in other journals and edited volumes. He has testified on Persian Gulf issues before the Committee on International Relations of the U.S. House of Representatives and the U.S. Senate Foreign Relations Committee.

Max Hoffman
Associate director, National Security and International Policy, Center for American Progress
Max Hoffman is the associate director of National Security and International Policy at American Progress, focusing on Turkey and the Kurdish regions; U.S. defense policy; and the intersection of climate change, human migration, and security concerns. He has organized and undertaken repeated research trips to Turkey, Iraq, Lebanon, Germany, and India. Prior to joining American Progress, Hoffman worked on disarmament and security issues for the United Nations and the U.S. House of Representatives Armed Services Committee. Hoffman has been published in a range of academic and news outlets. He received his M.A. in history from the University of Edinburgh in Scotland.

The Honorable Arne Lietz
Member, European Parliament, SPD
Arne Lietz is a member of the foreign affairs and development committees, and a substitute in the security and defense committee and the committee of inquiry into money laundering, tax avoidance and tax evasion. He is also a member of the parliament’s delegations for relations with Israel and the Korean Peninsula. After university, he worked for the educational organization Facing History and Ourselves in the United States, Germany, and England (2004-2006), and for the Federal Center for Education in Germany. His political career started when he became a parliamentary assistant to SPD member of the German Bundestag Engelbert Wistuba in 2007. Before becoming a Member of the European Parliament in 2014, Lietz was a personal assistant for the Mayor of Lutherstadt Wittenberg, Eckhard Naumann (2010-2014).

The Honorable Serpil Midyatli
Member, Schleswig-Holstein State Parliament, SPD
Serpil Midyatli has served as member of the Schleswig-Holstein state parliament since 2009. She is a member of the state executive committee of the SPD Schleswig-Holstein and has been involved in the SPD party executive board at the federal level since 2017. In 2012, the state parliamentary group elected her Deputy Chairman. Midyatli is spokeswoman for integration, migration, families, gender equality and day care centers, a Member of the Social Committee and represents the fraction in the committee for questions of the German minority in North Schleswig. Previously, she served as spokeswoman for the Housing, Integration and Migration Group. Midyatli began her career as a restaurant manager and catering provider in Kiel.

The Honorable Dietmar Nietan
Member, Bundestag; member, Foreign Affairs Committee; treasurer, Social Democratic Party, Germany
Dietmar Nietan has served as federal treasurer of the Social Democratic Party (SPD) since 2014. He has been a member of the German Bundestag since 1998 and became chairman of the board of the German-Polish Community Federal Association in 2010. Prior to that, he worked as a foreign policy advisor to Martin Schulz and as a coordinator between the SPD parliamentary and EU parliamentary group. Since 2010, Nietan has acted as rapporteur of the SPD parliamentary group for all questions of foreign and security policy in the European Union and heads the coordination group Turkey of the SPD party executive committee. His focus lies on European politics, as well as on the relationship between Germany, Turkey and Poland. Furthermore, Nietan is a member of the executive committee of the regional group of North Rhine-Westphalia SPD members of th e Bundestag and belongs to the spokesman of the Parliamentary Left in the SPD parliamentary group. He gained his first professional experience as a constituency member of the then SPD Member of Parliament Josef Vosen.

Colonel Richard Outzen
Senior advisor for Syria, U.S. Department of State
Col. Rich Outzen is a senior advisor for Syrian engagement at the U.S. Department of State. He previously served as a senior U.S. Army advisor and a member of the State Department Policy Planning Staff. Outzen is a visiting senior research fellow at the Institute for National Strategic Studies (INSS). Outzen previously served on the National Defense University and INSS faculty from July 2014 to July 2016. He also served as the deputy chief of staff for training and development for the U.S. security coordinator in Jerusalem. He has researched and published extensively on matters of policy and strategy, with a focus on the greater Middle East and Central Asia.  A U.S. Army foreign area officer, he has served in a variety of staff, command, and policy support assignments in Washington, D.C. and overseas. He has helped shape inter-agency discussion and national policy options for transitions in Iraq, Afghanistan, Turkey, Israel, and the Palestinian Authority.  His areas of expertise include defense policy and strategy, strategic culture, the Middle East, NATO/Europe, and Central Asia.

Humeyra Pamuk
Senior correspondent, Reuters
Humeyra Pamuk is a senior correspondent at Reuters. She has been a journalist for 16 years, with postings in London, Dubai, Cairo and most recently her native Turkey. Since 2013, Humeyra has covered the tremendous political transformation that Turkey has undergone that was marked with six electoral cycles, millions of Syrian refugees taking shelter in Turkey, the emergence and collapse of the Kurdish peace process, and a failed coup. Throughout her time out of Istanbul, she has regularly traveled to the Kurdish southeast, and inside Syria and Iraq for assignments. In 2017, Humeyra completed the Knight-Bagehot journalism fellowship at Columbia University in New York and has recently been appointed to Reuters Washington DC bureau.

Berkin Şafak Şener
International Consultant on Employment, United Nations Development Programme
Berkin Şafak Şener is an Istanbul-based consultant on labour market and economic inclusion with work experience in international development organisations in the Western Balkans and the Middle East. His professional areas of interest include employment, social welfare policy and social-solidarity economy practices. He currently works as a consultant at UNDP and act as a board member at Youth Deal Cooperative - Turkey’s first youth-led social cooperative, a member of International Cooperative Alliance Youth Network. He is a graduate of Johns Hopkins University SAIS.

Semuhi Sinanoğlu
Jeanne Sauvé Foundation Fellow, McGill University
Semuhi Sinanoğlu is currently a Sauvé fellow at the Jeanne Sauvé Foundation in Montreal. Sinanoğlu also serves as the founding president of the Co-Opinion Network, a World Bank partner which mobilizes more than 30 stakeholder institutions across 6 countries in the Middle East & North Africa, to advocate youth policies and empower young people in the region. The network aims to accomplish multi-stakeholder collaboration between the private sector, universities, and civil society to foster youth employment. Besides his university-based research projects, he worked for two years as social policy analyst at Development Analytics, a London & Istanbul-based consultancy company, where he was involved in several research projects of international institutions such as the World Bank and the Organization of Islamic Cooperation. He has been to Armenia, South Cyprus, and Iraq to contribute to peace-making and conflict resolution efforts.

Gönül Tol
Director for Turkish Studies, MEI
Gönül Tol is the founding director of The Middle East Institute’s Center for Turkish Studies. She is also an adjunct professor at George Washington University’s Institute for Middle East Studies.After three years of field research in Germany and the Netherlands, she wrote her dissertation on the radicalization of the Turkish Islamist movement Milli Gorus in Western Europe. She was also an adjunct professor at the College of International Security Affairs at the National Defense University. She has taught courses on Islamist movements in Western Europe, Turkey, world politics, and the Middle East.She has written extensively on Turkey-U.S. relations, Turkish domestic politics, and foreign policy and the Kurdish issue. She is a frequent media commentator.