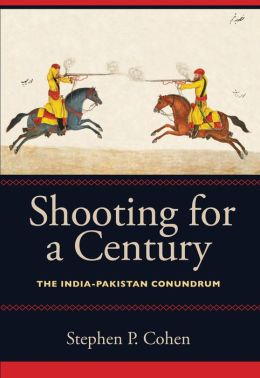 The Middle East Institute is proud to host author and Brookings senior fellow Stephen P. Cohen for a reading and discussion of his book, Shooting for a Century: The India-Pakistan Conundrum (Brookings Institution Press, 2013). In his latest book, Dr. Cohen explores one of the most intractable conflicts in modern history and examines the parallels with the ongoing Israeli-Palestinian conflict, observing how nuclear weapons, minority and victim psychology, and outside powers come into play in both regions. Widely regarded as one of America's foremost experts on South Asian affairs, Dr. Cohen provides a comprehensive look at the origins and developments of the conflict and at what the future holds for the Indian subcontinent. The Middle East Institute's Dr. Marvin Weinbaum will lead the discussion. Afterwards, Dr. Cohen will sign copies of his book.

Stephen P. Cohen joined the Brookings Institution as Senior Fellow in Foreign Policy Studies in 1998 after a career as a professor of Political Science and History at the University of Illinois. In 2004 he was named by the World Affairs Councils of America as one of America's five hundred most influential people in the area of foreign policy. Dr. Cohen is the author, co-author or editor of over fourteen books, mostly on South Asian security issues, as well as on India, Pakistan, nuclear proliferation, disaster management, and the application of technology to the prevention or amelioration of terrorism. Dr. Cohen has taught at Lee Kuan Yew School of Public Policy in Singapore, Keio University in Japan, and Andhra University in India, and has consulted for numerous foundations and government agencies. Dr. Cohen was a member of the Policy Planning Staff in the Department of State from 1985-87; Visiting Scholar in the Ford Foundation, New Delhi, in 1992-3; and a member of the National Academy of Science's Committee on International Security and Arms Control from 1999-2013. He is also the founder of several arms control and security-related institutions in the U.S. and South Asia. He has conducted research in India since 1963 and Pakistan since 1977.

Dr. Marvin G. Weinbaum is professor emeritus of political science at the University of Illinois at Urbana-Champaign, and served as analyst for Pakistan and Afghanistan in the U.S. Department of State's Bureau of Intelligence and Research from 1999 to 2003. He is currently a scholar-in-residence at the Middle East Institute in Washington DC. At Illinois, Dr. Weinbaum served for fifteen years as the director of the Program in South Asian and Middle Eastern Studies. His research, teaching, and consultancies have focused on the issues of national security, state building, democratization, and political economy in Afghanistan and Pakistan. He is the author or editor of six books and has written more than 100 journal articles and book chapters. Dr. Weinbaum was awarded Fulbright Research Fellowships for Egypt in 1981-82 and Afghanistan in 1989-90, and was a senior fellow at the United States Institute of Peace in 1996-97. He has been the recipient of research awards from the Social Science Research Council, the Ford Foundation, the American Political Science Association, and other granting agencies.