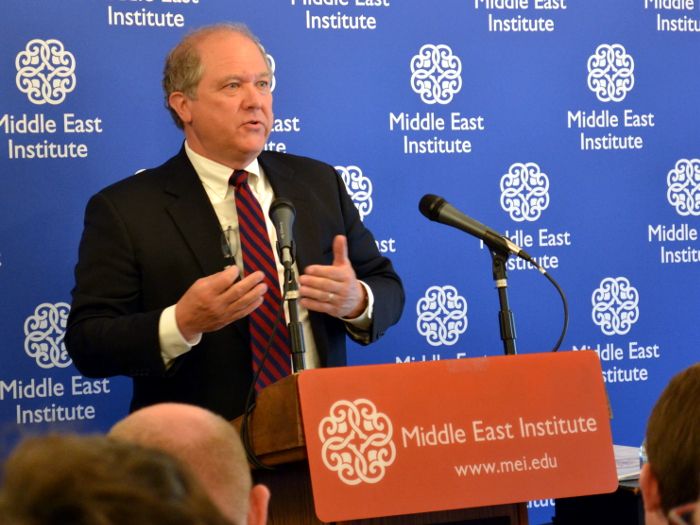 The Middle East Institute's Louis R. Hughes Lecture Series is pleased to present John F. Sopko, the Special Inspector General for Afghanistan Reconstruction (SIGAR), for a discussion about his agency's work conducting oversight of U.S. reconstruction efforts in Afghanistan. Drawing on his experience with SIGAR's oversight work and reflections from his recent travels to Afghanistan, Special Inspector General Sopko will discuss the challenges the reconstruction effort faces during this pivotal year of transition and the drawdown of U.S. and Coalition forces.

John F. Sopko was appointed Special Inspector General for Afghanistan Reconstruction (SIGAR) by President Obama in 2012. He has more than 30 years of experience in oversight and investigations as a prosecutor, congressional counsel, and senior federal government advisor. He previously served as a partner at Akin Gump Strauss Hauer & Feld LLP, an international law firm headquartered in Washington, D.C. Sopko worked over 20 years on Capitol Hill, where he held key oversight positions in the House Committee on Energy and Commerce, the Select Committee on Homeland Security, and the Senate Permanent Subcommittee on Investigations, among others.  After his work in the Senate, he served as deputy assistant secretary for enforcement for the Bureau of Export Administration and as deputy assistant secretary for the National Telecommunications and Information Administration at the Department of Commerce. As a federal prosecutor, Sopko received the Justice Department’s Special Commendation Award for Outstanding Service to the Criminal Division (1982), and the Special Achievement Award for Sustained Superior Performance (1980).

Marvin G. Weinbaum is professor emeritus of political science at the University of Illinois at Urbana-Champaign, and served as analyst for Pakistan and Afghanistan in the U.S. Department of State's Bureau of Intelligence and Research from 1999 to 2003. He is currently a scholar-in-residence at the Middle East Institute in Washington DC. He is the author or editor of six books and has written more than 100 journal articles and book chapters. Dr. Weinbaum was awarded Fulbright Research Fellowships for Egypt in 1981-82 and Afghanistan in 1989-90, and was a senior fellow at the United States Institute of Peace in 1996-97. He has been the recipient of research awards from the Social Science Research Council, the Ford Foundation, the American Political Science Association, and other granting agencies.