The Growing Role of Empathy in the Arts 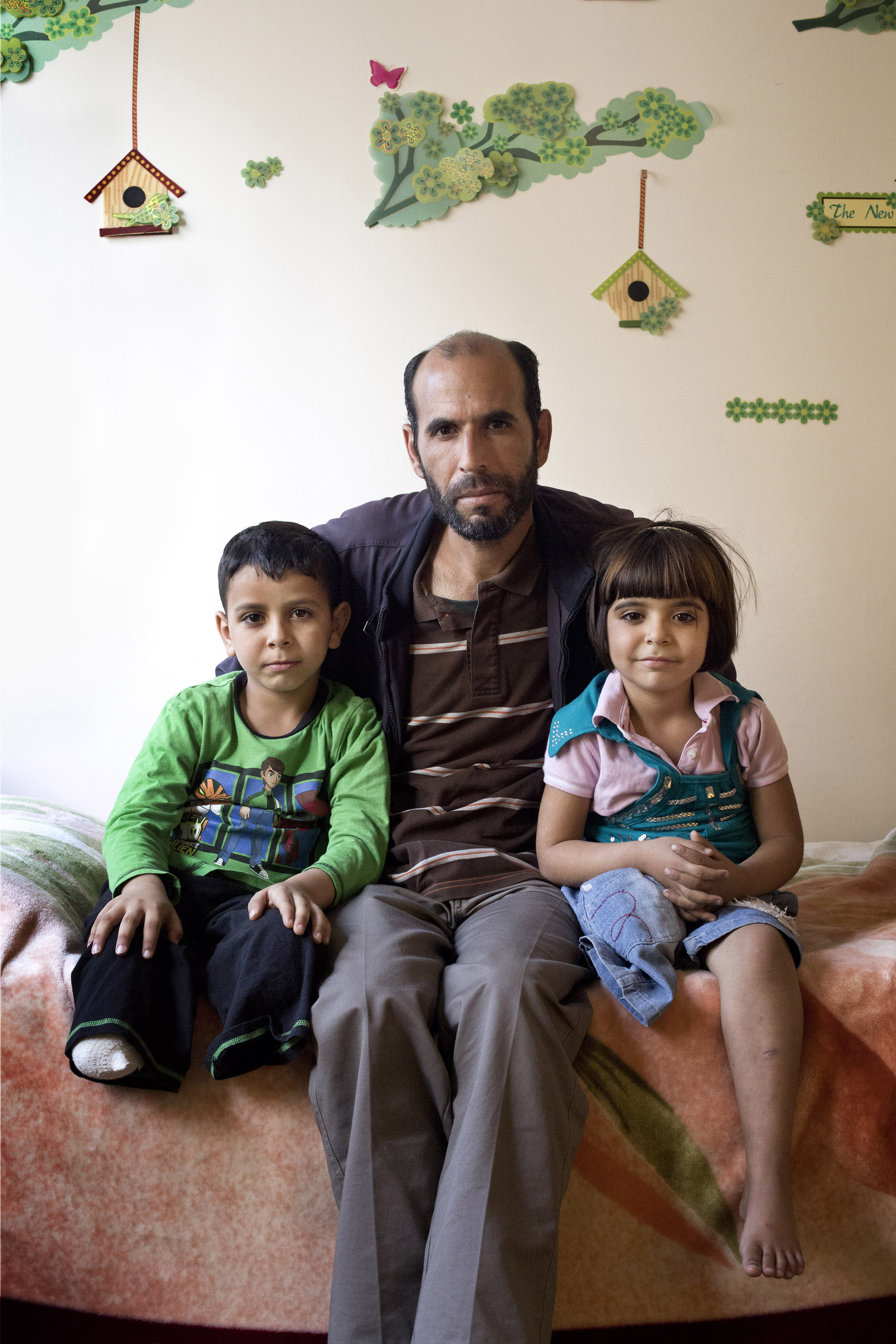 The Middle East Institute's Arts & Culture Program is pleased to present a panel conversation on the role of the arts in fostering understanding and building empathy for the displaced. This event is part of A Special Arts Program on the Syrian Crisis, produced in collaboration with Gallery Al-Quds and the Goethe-Institut.

Six years into the world’s most pressing humanitarian conflict, generating empathy for the plight of the syrian people only grows more challenging. In the face of widespread apathy, the arts have been one of the most effective ways to humanize the conflict by bringing the personal voices and stories of Syrians to the forefront.

How do the arts create a space for transformative social dialogue, and in the process help move audiences beyond passive sympathy to active engagement? This panel brings together visual artists, scholars, and arts professionals to discuss the potential of the arts to create space for transformative social dialogue and promote understanding across cultural difference. Speakers include Rashwan Abdelbaki, Syrian visual artist currently in resident at ArteEaste NYC through IIE's Artist Protection Fund Fellowship; Elif Gokcigdem, historian of islamic art, scholar, and editor of Fostering Empathy Through Museums (Rowman, 2016); Daniel Sonnentag, Berlin-based photographer and videographer behind the THEY HAVE NAMES project; Kai Wiedenhöfer, award-winning German photographer; and Helen Zughaib, Washington DC-based painter and mixed media installation artist. The discussion will be moderated by Dagmar Painter, Founder and Curator of Gallery Al-Quds at the Jerusalem Fund.

Rashwan Abdelbaki
Visual Artist, awarded a 2016 IIE - Artist Protection Fund Fellowship; currently in residence at ArteEast NYC through September 2017
Rashwan Abdelbaki is a multi-media artist specialising in ‎painting, etching, ‎engraving, digital art, installation and video. He graduated from the Faculty of Fine Arts of Damascus University in 2007, with a Bachelor’s degree in printmaking techniques. Since graduating, he has been featured in several solo and group exhibitions in Lebanon and Syria where his talent has been widely acclaimed. Abdelbaki finds inspiration in the many aspects of life and the world around him, however, the recurring main theme running through his collections seems to be that of Adam and Eve, who according to Genesis, were the first humans on Earth. He focuses on the complexity of their relationship, and is inspired by the many problems they faced after being expelled from the Garden of Eden. The artist is affected by the ongoing conflict in Syria and admits on not being able to easily isolate himself from the war and accept his lack of control on the disorder and calamities.

Elif M. Gokcigdem, Ph.D.,
Historian and Scholar of Islamic Art
Elif Gokcigdem is a historian of Islamic art, a museums scholar, and the founder of Empathy-building Through Museums Initiative. Her recent book: Fostering Empathy Through Museums has been acknowledged by the American Alliance of Museums (AAM) TrendsWatch 2017. She received her Ph.D. in History of Art from Istanbul Technical University and a graduate certification in Museum Studies from the George Washington University (GWU). Her academic studies focused on the symbolism of geometric patterns and figural imagery in medieval Islamic art. She worked as a curatorial research assistant at the Islamic Arts Department of the Smithsonian Institution’s Freer and Sackler Galleries. Gokcigdem presented her work at international conferences such as the European Science Foundation Conference, the AAM Annual Meeting, and the Association of Science and Technology Centers Conference.

Dagmar Painter
Curator, Gallery Al-Quds, The Jerusalem Fund
Dagmar Painter is the founder and curator of Gallery Al-Quds, the cultural program of The Jerusalem Fund for Education and Community Development. Since the inception of the gallery, Ms. Painter has designed and installed more than 75 exhibitions, including many that have subsequently travelled in the United States and abroad. For her work in Egypt she received the Meritorious Honor Award from the U.S. Department of State. In Washington, she previously established and ran the art gallery of the Embassy of Tunisia and directed Gallery Patina, a non-profit gallery of the National Council on Aging. In Cairo, Egypt, she curated exhibitions of Egyptian and American artists; in Tunisia she developed a cooperative, designing and marketing crafts for local artisans. She has written and lectured extensively in the United States and abroad on cross-cultural and arts issues, at such venues as the Textile Museum in Washington D.C., and Meridian House International. Selected publications include Arts in the Islamic World, Ornament, Cairo Today, Focus on Pakistan, The Herald, India Today, Arts in Embassies, A Practical Guide to Cairo and Savior: Tunis.

Lyne Sneige
Director, Arts and Culture Program, Middle East Institute
Lyne Sneige is the director of the Arts & Culture Program at the Middle East Institute. She has over 15 years of experience in international development in the Middle East. Before joining MEI, Sneige was Deputy Director of Lebanon and Regional Projects Manager for Arts and Culture for the Middle East at the British Council operating out of Beirut. She has extensive experience in strategy and planning as well as project management, and has many years of experience in the arts and culture scene in Lebanon and throughout the Middle East. Sneige spearheaded several initiatives such as the Creative Economy and Cultural Leadership agendas in the region, and is a strong advocate of the important role that artists play in their societies, and a main contributor to changing perceptions of the cultural sector in the Middle East as an important conduit to social and economic change.

Daniel Sonnentag
Photographer and videographer
Born in West Berlin in 1982, Daniel Sonnentag grew up in one of Berlin’s neighborhoods with the highest population of migrants, mostly from Turkey and several Arab countries.  At age 17, he began working as a photo assistant, and then briefly attended the photography school Fotografie am Schiffbauer Damm. His career as a photographer and videographer began in 2007, primarily shooting commercials for big brand companies, as well as actor portraits. In 2015, Mr. Sonnentag began volunteering at the ICC Berlin refugee camp, where he first met the subjects of his recent photography. Since his initial encounters with the children there, he has become a regular force in the camp, accompanying the kids on excursions, teaching kick boxing, and providing a strong “fatherly” figure for many. These experiences influenced his decision to focus his photographic work on the social issues of integration of immigrants and the communication between people of different cultural and religious backgrounds. The social media campaign, THEY HAVE NAMES, sprouted out of this work.

Kai Wiedenhöfer
Photographer and photo-journalist
Born in Germany in 1966, Kai Wiedenhöfer received an MA in photography and editorial design from the Folkwang University of the Arts Essen, and studied Arabic in Damascus, Syria. He has received numerous awards, including the Leica Medal of Excellence, the Alexia Grant for World Peace and Cultural Understanding, World Press Photo awards, the Eugene Smith Grant in Humanistic Photography and the Carmignac Gestion Photojournalism Award. Mr. Wiedenhöfer has published four books with Steidl: Perfect Peace (2002), Wall (2007), The Book of Destruction (2010, exhibited as a solo exhibition in the Musée d´Art Moderne de la Ville de Paris), and CONFRONTIER (2013, about walls worldwide). Solo exhibitions include “WALLONWALL,” which covered 364 meters of the Berlin Wall with works from CONFRONTIER, and the 2015 “WARonWALL – The Struggle in Syria,” which is accompanied by Syrian Collateral (2016). In December 2016, the International Human Rights League in Berlin presented Mr. Wiedenhöfer with the Carl-von-Ossietzky Medal for citizens who promote basic human rights.

Helen Zughaib
Visual Artist
Helen Zughaib was born in Beirut, Lebanon, living mostly in the Middle East and Europe before coming to the United States to study art at Syracuse University, earning her BFA from the College of Visual and Performing Arts. She paints primarily in gouache and ink on board and canvas. More recently, she has worked with wood, shoes, and cloth in mixed media installations. Her work has been widely exhibited in galleries and museums in the United States, Europe and Lebanon. Her paintings are included in many private and public collections, including the White House, World Bank, Library of Congress, US Consulate General, Vancouver, Canada, American Embassy in Baghdad, Iraq, the Arab American National Museum in, Michigan. She was awarded  the Artist Fellowship grant from the DC Commission on the Arts and Humanities in 2015 and 2016, and is included in the new Washingtonia Collection, and DC Art Bank. In 2008, Helen was invited as U.S. Cultural Envoy through the U.S. Department of State, to Palestine. In 2009, she was invited to Switzerland and France, under the US Department of State’s Speaker and Specialist Program. In October 2016, she traveled to Saudi Arabia as US Cultural Envoy, speaking to young Saudi women artists.

A Joint Program by