Kobani: A Challenge to the Turkish-Kurdish Peace Process? 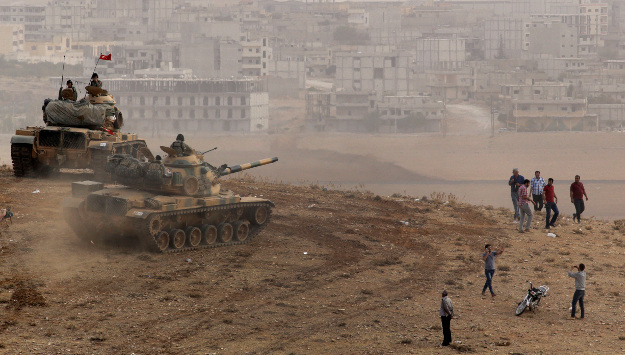 The Islamic State's siege on Kobani could dramatically impact the future of regional actors. Already, Ankara's refusal to unilaterally intervene has sparked violent protests throughout Turkey, which have cost over 30 lives to date.

The Center for Turkish Studies at The Middle East Institute and the Institute of Turkish Studies at Georgetown University are pleased to host a panel discussion on the most recent developments in Kobani. Will Turkey's inaction threaten its peace process with the Kurds, as the Peoples' Democratic Party (HDP) and Kurdistan Workers' Party (PKK) have warned? What are the reasons for Ankara's reluctance to intervene militarily in Kobani, and what are the consequences of intervention? Experts Aliza Marcus (Author of Blood and Belief:The PKK and the Kurdish Fight for Independence), Kadir Üstün (SETA Foundation), and Mehmet Yüksel (Peoples' Democratic Party), will consider these questions. Gönül Tol (The Middle East Institute) will moderate the discussion.

Dr. Sinan Ciddi, executive director of the Institute of Turkish Studies, and visiting assistant professor in the Edmund A. Walsh School of Foreign Service at Georgetown University, gained his Ph.D in Political Science from the School of Oriental and African Studies, University of London in June 2007. He was previously an instructor at Sabancı University between 2004 and 2008 and completed his post-doctoral fellowship at the same institution between 2007 and 2008. He published a book titled Kemalism in Turkish Politics: The Republican People’s Party: Secularism and Nationalism (Routledge, January 2009) focusing on the electoral weakness of the Republican People’s Party.

Dr. Gönül Tol is the founding director of The Middle East Institute’s Center for Turkish Studies. She is also an adjunct professor at George Washington University’s Institute for Middle East Studies. She received her Ph.D degree in Political Science from Florida International University, where she was a graduate fellow at the Middle East Studies Center. She previously worked at the U.S. Representative Office of the Turkish Industry and Business Association (TUSIAD). She was also an adjunct professor at the College of International Security Affairs at the National Defense University.

Aliza Marcus is formerly an international correspondent for The Boston Globe and lives in Washington, D.C. She covered the PKK for more than eight years, first as a freelance reporter for the Christian Science Monitor and later as a staff writer for Reuters, receiving a National Press Club Award for her reporting. She is also a recipient of a MacArthur Foundation grant for her work (NYU Press). She published a book titled Blood and Belief: The PKK and the Kurdish Fight for Independence (NYU Press, 2009). Blood and Belief combines reportage and scholarship to give the first in-depth account of the PKK. She is one of the first Western reporters to meet with PKK rebels.

Dr. Kadir Ustun is the research director at the SETA Foundation, Washington, DC. He also serves as an assistant editor of Insight Turkey, an academic journal published by the SETA Foundation. Dr. Ustun holds a Ph.D in Middle Eastern, South Asian, and African Studies from Columbia University and a master's degree in History from Bilkent University. Dr. Ustun has taught courses on history, politics, culture, and art in the Islamic World as well as Western political thought at Columbia University and George Mason University. His research interests include civil-military relations, social and military modernization in the Middle East, U.S.-Turkey relations, and Turkish foreign policy.

Mehmet Yuksel is the current representative of the Peoples' Democracy Party (HDP) in the USA. For the last 16 years, he has been active in the movement for democracy and human rights in Europe. In Cophenhagen, he was a founder and active member of the Kurdish Youth Association. He late lived and worked in Rome, Brussels, and London. His activities have especially focused on the Kurdish issue. He speaks Kurdish, Turkish, Danish, Italian, English and German, and has studied informatics and specialized in peace-building and conflict resolution.