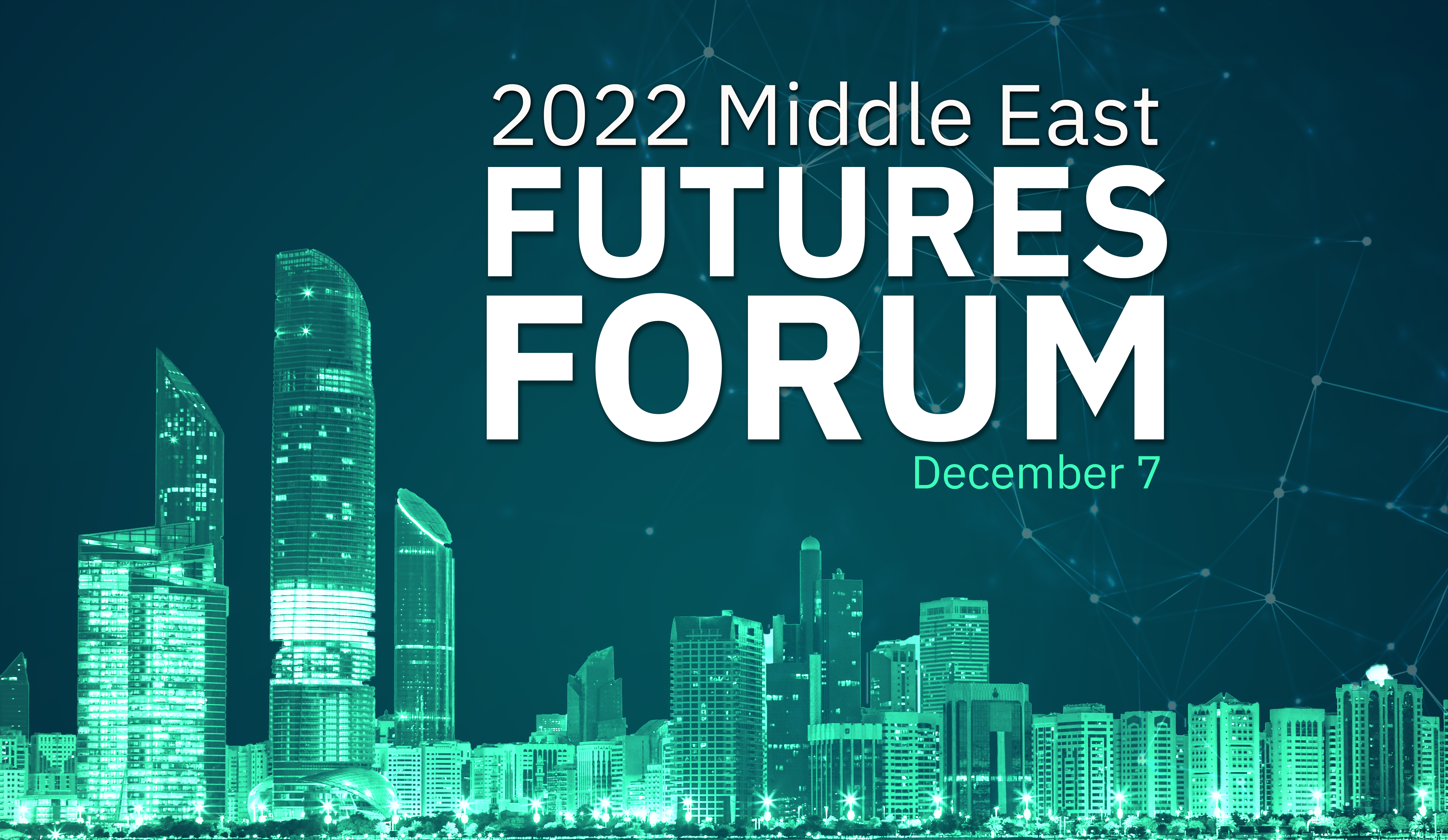 The Middle East Institute (MEI), in partnership with the United Nations Development Programme (UNDP) and its Regional Bureau of Arab States (RBAS), presents the second annual MEI Futures Forum. The Futures Forum will convene top thinkers and change leaders from around the world to push the envelope of innovation and inspiration on imagining future solutions to the most pressing problems of the Middle East and North Africa (MENA) and paths to realizing the region’s greatest potential opportunities. The Futures Forum is the signature annual event of MEI’s Strategic Foresight Initiative program.

8:30am - 9:00am EST | Session I: Megatrends and Their Implications for the Arab Region

In support of “Our Common Agenda,” the UN Secretary-General’s landmark 2021 report, and the planned “Summit of the Future” during the General Assembly’s high-level week in 2024, ESCWA is undertaking a series of strategic analyses of some of the most important megatrends impacting the MENA region. Mounir Tabet, ESCWA Deputy Executive Director, will discuss the Megatrends Project and some of the important implications of global megatrends for the futures of the Arab region with Dr. Paul Salem, President and CEO, MEI.

There is evidence of an important role that the emergence of entrepreneurial startups can play in the aftermath of conflicts, producing goods and services that mitigate the consequences on affected populations, and fostering renewal of constructive trustful relations among groups. This panel will consider futures in which public and private sector leaders are proactive in this area. Experience has shown that when governments and development organizations in the MENA region consider economic issues within humanitarian and development programs and foster entrepreneurial ecosystems as a deliberate element of stabilization and peacebuilding in conflict and  “pre-conflict” zones, the results can take root faster and be more effective. What if regional and global venture capital and venture philanthropy communities also made startups in conflict and pre-conflict zones a deliberate part of their investment strategies?

The cities of the future must be sustainable in a multiplicity of dimensions, from their energy usage to waste management, to the industries they build their economies on, their technological and infrastructural renovations, their approaches and commitments to social justice and equity, their health resilience, food systems and more. This panel will consider the transformational shifts needed for cities of the future to be sustainable, and the lifestyle changes, circular solutions, and planetary dimensions that need to be considered. What actions must local governments, urban stakeholders and leaders of all sectors in the MENA region take? What barriers must be  overcome to make cities sustainable and livable - not just in new-build developments like Neom and Egypt’s “New Administrative Capital” - but especially in the cities where millions already live.

A recently completed analysis by UNDP in collaboration with the global design firm Arup and the University of Liverpool explored a future gender-responsive approach to urban planning, one that transcends the inequalities that restrict women’s social and economic opportunities, health and wellbeing, sense of safety and security, and access to justice and equity. Dr. Sara Candiracci, Associate Director at Arup, and co-author of the study, will talk with Tehmina Akhtar, Senior Strategic Advisor at UNDP, Regional Bureau for Arab States, about the study’s conclusions and frameworks and how the futures of cities in the MENA region could be reimagined and transformed by them.

Dr. Khalida Bouzar
Dr. Khalida Bouzar is Assistant Secretary-General, Assistant Administrator, and Director of the Regional Bureau for the Arab States. She has 35 years of international and national corporate leadership experience, including 25 years in the UN system. She is an expert in fragile states development, and in conflict and post-conflict responses. Bouzar has worked extensively across development issues covering sustainable development, rural development, environment, climate change, migration, economics, and industry, in Sub-Saharan Africa, Asia, Eastern Europe, and mainly in the Arab region. Bouzar served as Regional Director for Near East, North Africa, and Europe, at the International Fund for Agricultural Development (IFAD) and as the Deputy Director of the United Nations Environment Programme (UNEP) Division of Technology, Industry and Economics. She also served as Regional Sustainable Development Advisor at UNDP Algeria; International Technical Expert in Drylands Development in the Bureau for Development Policy at UNDP, and Programme Director at the Global Mechanism of the UNCCD. Bouzar holds a PhD in Science from the University of Sciences, Pierre et Marie Curie.

Steven Kenney
Steven Kenney is the Director of the Strategic Foresight Initiative at MEI. Steven Kenney is the founder and principal of Foresight Vector LLC, an advisory firm he created to help organizations develop the strategies they need to achieve their greatest success. He has advised a wide variety of government, corporate, and non-profit sector organizations on how to create their future. Steven’s work includes advisory engagements for top executives in Fortune 500 and other leading corporations. He has also designed and led engagements for top leaders in Cabinet-level departments of the U.S. government, and for dozens of U.S. and other nations’ government agencies.

Mounir Tabet
Mounir Tabet is the Deputy Executive Director, at the UN Economic and Social Commission of Western Asia (ESCWA), and the Deputy Executive Secretary of the UN Economic and Social Commission for Western Asia (ESCWA).  Prior to that, Mr. Tabet served as the UNDP Country Director for Iraq, UNDP Resident Coordinator in Tunisia, and Country Director of UNDP Egypt. Mr. Tabet was also the Senior Programme Advisor for the Regional Bureau for Arab States at UNDP in New York and served in a variety of country and headquarter positions with UNDP. Prior to joining UNDP, he worked with the North-South Institute, the International Development Research Centre in Ottawa, and the University of Ottawa. Mr. Tabet holds a MA in Public Administration at Harvard University and an MA in Economics from the University of Ottawa.

Paul Salem
Paul Salem is the president of MEI. He focuses on issues of political change, transition, and conflict as well as the regional and international relations of the Middle East. Salem is the author and editor of several books and reports including Escaping the Conflict Trap: Toward Ending Civil Wars in the Middle East; Winning the Battle, Losing the War: Addressing the Conditions that Fuel Armed Non-State Actors, and Conflict Resolution in the Arab World. Prior to joining MEI, Salem was the founding director of the Carnegie Middle East Center in Beirut from 2006-2013. From 1999-2006, he was director of the Fares Foundation and in 1989-1999 founded and directed the Lebanese Center for Policy Studies, Lebanon’s leading public policy think tank. He holds a BA, MA, and PhD from Harvard University.

Omar Christidis
Omar Christidis is the founder and CEO of Arabnet, which produces leading events, insights, and innovation programs focused on tech business and innovation in the MENA region. Before founding ArabNet, Omar worked in private wealth management at a family office in New York on a small team managing US $1 billion in diverse assets. Prior to that, he was a Consultant at Booz & Co. in the MENA, and worked on varied projects across industries, including energy, technology/media, and public sector. He holds a BA and MBA from Yale University and is the co-founder of the Yale Arab Alumni Association.

Jaideep Dhanoa
Jaideep Dhanoa is the co-Founder and CEO of Fenix, an e-mobility app for the Greater Middle East. The company launched in November 2020 and now operates in 13 cities in the UAE, Saudi Arabia, Bahrain, Qatar and Turkey. Jaideep has almost a decade of disruptive mobility experience in emerging markets, previously holding senior leadership positions with Grab, Careem, and Circ. Before entering the mobility industry, Jaideep spent several years with McKinsey and Company’s Silicon Valley office and led digital video businesses in Asia Pacific with The Walt Disney Company and The Indian Premier League. Jaideep holds a Bachelor of Science degree from Columbia University and an MBA with Distinction from INSEAD.

Mona Itani
Mona Itani is an engineer, academic, and social entrepreneur. After completing her PhD in Management from the University of Leicester, she joined the Suliman S. Olayan School of Business of the American University of Beirut as a full-time assistant professor of entrepreneurship in 2021. She is a published author on entrepreneurship, women, ethics, and education. She is known for her community work in the field of women in technology empowerment including her role as the co-founder of Girls got IT and ex-chair of IEEE Women in Engineering Affinity Group Lebanon Section. She founded Riyada for Social Innovation SAL in 2017 and in 2020, she co-founded Shabab Lab, the first social innovation e-learning platform in the region. She is a renowned public speaker and expert on entrepreneurship and social innovation in the Arab world.

Saleha Mohsin
Saleha Mohsin is a Senior Washington Correspondent at Bloomberg News, where she is covering policy and politics. In 2011, she moved with her husband to Norway. Since moving to Scandinavia she has discovered her growing patriotism and the fact that she is an immigrant parent. Her experiences inspired her to launch a blog about being an American expat living in Norway. Besides her work at Bloomberg and blogging, she is currently writing a book about the Treasury Department, strong dollar policy, for Penguin Random House. Ms. Mohsin holds a Master of Arts degree in journalism from the University of the Arts London.

Adam Giambrone
Adam Giambrone is the Mobility Director and Head of Roads Division at Neom. Prior to this, he spent 20 plus years working in North America, Africa and the Middle East. He spent seven years with the Toronto Transit Commission (TTC), including five years as the Commissioner and Chair of the TTC – North America’s third-largest public transit agency with 14,000 employees. Adam has also managed projects on the ground in Africa, led major transit planning initiatives in New York and worked with the Province of Quebec’s government transportation agency for Montreal. In addition, Giambrone has advised government agencies on five continents regarding infrastructure programs and transformation, as well as holding senior government posts.

Melissa Inguruca Moreno
Melissa Ingaruca Moreno is a transdisciplinary designer and researcher in multispecies urbanism. In 2022, she won the Next Generation Foresight Practitioners Award with her Berlin-based summer school envisioning and creating multispecies city futures for all. Her project is entitled “Future Tinkering: do-it-yourself transformations to multispecies cities”. Melissa holds a Master’s Degree from Stockholm University in Socio-Economic resilience for Sustainable Development.

Sara Candiracci
Dr. Sara Candiracci is an Associate Director at Arup, and Europe Leader for Social Value and Equity. She is an urban planning and development expert, and a social researcher, with more than two decades of experience in designing and leading programmes focused on more equitable, inclusive, healthy and resilient cities. She leads Arup’s work on child-friendly and playful cities and on gender-responsive urban planning. Prior to Arup, Sara has worked with UN Agencies, Development Banks and NGOs, establishing and implementing development projects and programmes together with cities and partners in Africa, Latin America and South-East Asia. Sara holds a PhD in urban planning, with a thesis on the role of cultural heritage in place-making and sustainable development in East Africa.

Tehmina Akhtar
Tehmina Akhtar is the Senior Strategic Advisor, UNDP, Regional Bureau for Arab States. She is responsible for strategic analysis, policy, and program oversight. She has worked in international development for more than 25 years. She served previously as Deputy Director of the Local Development Finance Practice at UNCDF, after working in UNDP’s Bureau for Policy and Programme Support and regional bureaux for Arab States, Europe and CIS, and Asia and Pacific, and leading global and regional programs on environment and development issues. She holds a Master of Environmental Management degree from Yale University, an MA in Middle Eastern Studies from New York University, and a BA in International Relations from Mount Holyoke College.