Ten Years After: Syrian Artists Reflect on the Anniversary of the Syrian Uprising 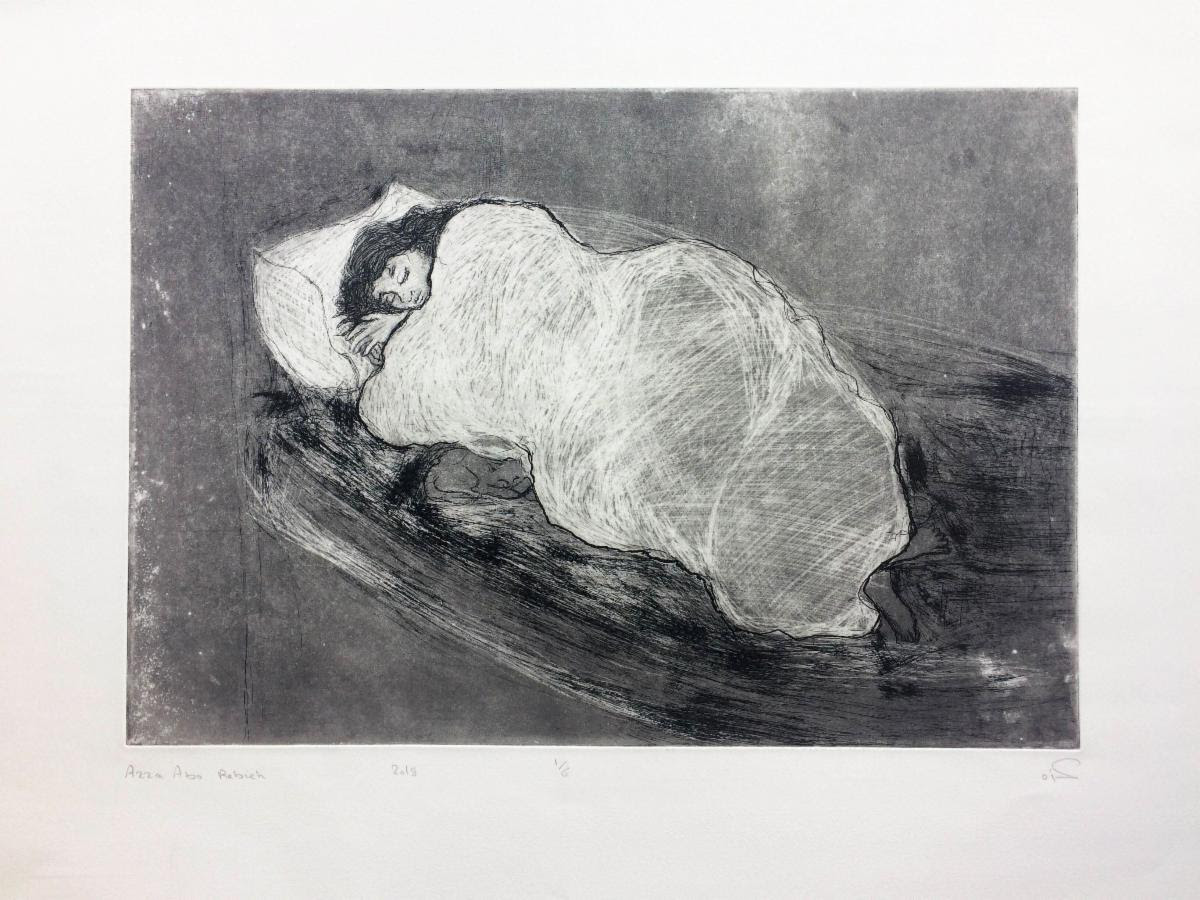 Marking the launch of the MEI Art Gallery exhibit, In This Moonless Black Night: Syrian Art After the Uprising, MEI is pleased to host a conversation exploring how Syrian artists in exile have addressed the hope, trauma and displacement of the past decade through their art.

Among the 14 participating artists, US-based artists Lara Haddad, Essma Imady and Kevork Mourad, as well as curator and writer Maymanah Farhat, will reflect on their artistic practice and the personal experiences that influenced their work over the past 10 years. They'll also examine how the exhibit's diverse imagery and media helps shape our understanding of the magnitude and complexity of the past decade with beauty, grace and humanity. Lyne Sneige, director of MEI's Arts and Culture Center, will moderate the discussion followed by Q&A .

She has been included among Foreign Policy’s annual list of 100 Leading Global Thinkers in recognition of her scholarship on Syrian art after the uprising (2014) and honored by the Arab America Foundation as one of 40 Arab Americans under the age of 40 who have made significant contributions to the Arab American community (2020). She holds a BA in the History of Art and Visual Culture from the University of California, Santa Cruz and a MA in Museum Administration from St. John’s University, New York.

Lara Haddad
Lara Haddad is a multimedia artist and photographer whose work is inspired by news media images, whether appropriated in her multimedia installations or referenced in her photographic work. Haddad was born in Damascus, Syria, and after visiting the United States in 2012, never returned.  She received a MFA in Photography from the University of Arizona in 2016. She has participated in group exhibitions in Cini Foundation, Venice, Italy; Steinfeld Warehouse Tucson, AZ; Colorado Photographic Art Center, Denver; and the Middle East Center, London School of Economics.

Essma Imady
Essma Imady is an installation and film artist based in the Twin Cities. She has exhibited and performed at several key galleries and museums both nationally and internationally including: The Minneapolis Institute of Art, The Walker and in 2018 was named Artist of the Year by City Pages. Essma grew up in Damascus, Syria, where she started her career in 2009, due to the war she moved to Minnesota in 2011 where she continued to expand her vision as an artist. Her practice addresses the political aspects of the personal, the formation of identities, and the complicated political relationship between vision and knowledge.

Kevork Mourad
Born in Qameshli, Kevork Mourad is a visual artist best known for his technique of live drawing and animation on stage with musicians, in which art and music harmonize with each other. Mourad received his MFA from the Yerevan Institute of Fine Arts in Armenia and has held resident teaching artist positions at Brandeis University, Harvard University and the College of the Holy Cross. He is a member of Yo-Yo Ma’s Silk Road Ensemble and is featured in the film Music of Strangers (2016).  He has performed nationally and internationally, including at The Aga Khan Museum, Toronto; The Art Institute of Chicago; The Brooklyn Museum of Art; Carnegie Hall; Nara Museum, Japan; and the Metropolitan Museum of Art.

Lyne Sneige - Moderator
Lyne Sneige is currently the director of the Arts & Culture Program at the Middle East Institute (MEI) in Washington, D.C. She has over 15 years of experience in international development in the Middle East. Before joining MEI, Sneige was deputy director Lebanon and regional projects manager for Arts and Culture for the Middle East at the British Council operating out of Beirut. She has extensive experience in strategy and planning as well as project management, and has many years of experience in the arts and culture scene in Lebanon and throughout the Middle East. Sneige spearheaded several initiatives such as the Creative Economy and Cultural Leadership agendas in the region, and is a strong advocate of the important role that artists play in their societies, and a main contributor to changing perceptions of the cultural sector in the Middle East as an important conduit to social and economic change. Sneige is a Salzburg Global Seminar fellow, a nominator to the Art Jameel Prize, an international award for contemporary art and design inspired by Islamic tradition organized in collaboration with the Victoria and Albert Museum in London, a nominator to the newly established Agha Khan Music Awards and an advisor to the educational and outreach program of the Beirut Museum of Art (BeMA) that is set to open in 2023. She sits on the general assembly of Action for Hope a Beirut based NGO that provides cultural relief and cultural development programs to meet the social, cultural and psychological needs of distressed and displaced communities.