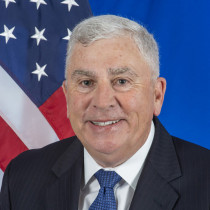 John P. Abizaid is a retired US Army four-star General, who most recently served as the United States Ambassador to the Kingdom of Saudi Arabia.

He served as the Distinguished Chair (Emeritus) of the Combating Terrorism Center at the United States Military Academy at West Point and was the first Annenberg Distinguished Visiting Fellow at the Hoover Institution, Stanford University. He was awarded Honorary Degrees from Dartmouth College and Norwich University. He has worked with the Preventative Defense Project at Stanford University and Harvard’s Kennedy School of Government and served on the CIA’s External Advisory Board. He is a Director of the Council on Foreign Relations and a member of the International Institute for Strategic Studies. He led the Dover Inquiry Panel and co-chaired the 2014 National Defense Panel, as well as leading several other national level assessment panels dealing with military issues. He has served as a board member for USAA, Virtu Financial, and RPM International and has advised a number of smaller firms and their leadership teams. From 2016 - 2018 he served as the senior advisor for the Secretary of Defense to the Ukrainian Minister of Defense.

In 2015 he was inducted into the US Army Ranger Hall of Fame. General Abizaid retired from the United States Army in May 2007 as Commander of US Central Command, after thirty-four years of active service. A graduate of the United States Military Academy at West Point, he commanded units at every level, serving in Grenada, Lebanon, Kurdistan, Bosnia, Kosovo, Afghanistan and Iraq. Units under his command include the 1st Infantry Division, a brigade in the 82nd Airborne Division, a Parachute Battalion Combat Team and two Ranger companies. He studied at the University of Jordan in Amman, holds a master’s degree in Middle Eastern Studies from Harvard University, and has deep expertise in regional as well as international strategy.

He is the Principal Partner of JPA Partners, LLC, a firm advising private business, government, and academic clients on leadership, national and international strategy, business, security, and military affairs.