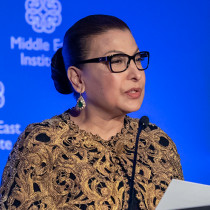 Huda Alkhamis-Kanoo is a patron of the arts who has dedicated her life to inspiring artists to create, generations to innovate, and communities to unite and prosper. She founded the Abu Dhabi Music and Arts Foundation (ADMAF) in 1996 and is Artistic Director of Abu Dhabi Festival, which she established in 2004. His Highness President Sheikh Khalifa bin Zayed Al Nahyan appointed her to the Board of the Abu Dhabi Authority for Culture & Heritage (now Department of Culture and Tourism) in 2006, on which she served until 2012.

Huda has received numerous awards and recognitions for her dedication to the arts, education and women’s development, including The Abu Dhabi Award and Abu Dhabi Medal, the UN-affiliated Women Together Award and an honorary doctorate from the American University of Paris. Many orders have been bestowed upon her, including The Commander of the Royal Order of Isabella the Catholic, by HM Philip IV, King of Spain; the Chevalier de l’Ordre National de la Légion d’Honneur of France; and the Order of the British Empire (OBE), bestowed upon her by HM Queen Elizabeth the Second.