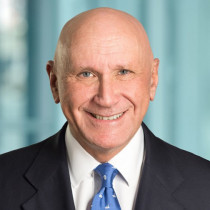 Louis R. Hughes is one of the founders of InZero Technologies and currently serves as its Chairman and CEO.  He is focused on directing InZero Technologies’ strategic development and bringing this exciting cybersecurity technology to the market. Hughes has a wealth of experience in strategic and innovative leadership.  Hughes was President and Chief Operating Officer of Lockheed Martin, the world’s largest defense manufacturer. Prior to Lockheed Martin, he was Executive Vice President at General Motors Corporation, where he had held progressively more responsible positions for over 25 years, including President of General Motors International Operations, President of General Motors Europe, Chairman of Adam Opel AG, a subsidiary of General Motors and Chairman of Saab Automobile. Hughes presided over an unprecedented and very profitable GM expansion into the world’s emerging markets, including eastern Europe, China and India, during the 1990s. In 2004 and 2005, Hughes also served as a US diplomat in Kabul, Afghanistan as Chief of Staff of the Afghanistan Reconstruction Group and senior advisor to the Karzai cabinet.

Hughes has served on the board of directors of 13 corporations in 8 countries over the last 30 years. These include ABB (Switzerland), where he chaired ABB's Finance, Audit and Compliance Committee; Akzo Nobel (Netherlands); Alcatel-Lucent (France), where he chaired ALU’s Technology Committee); British Telecom (United Kingdom); Deutsche Bank (Germany); Electrolux (Sweden); Maxager Technology (USA), where he served as Chairman of the Board; MTU (Germany), where he served as chairman of the Audit Committee; Nokia (Finland) where he chaired Nokia’s Technology Committee and Sulzer (Switzerland), where he served as chairman of the Audit Committee.  He is Executive Advisor to Windpoint, a private equity firm in the US and Cognomotiv, an AI startup in Silicon Valley.  In terms of pro bono activities, he serves on the boards of the American Institute for Contemporary German Studies (AICGS), the Ancient Egypt Research Associates (AERA), and the Middle East Institute (MEI).

Hughes received a Bachelor’s degree in Mechanical Engineering from Kettering University in 1971 and a Master of Business Administration from Harvard University in 1973.  Hughes is a recipient of the Outstanding Public Service Medal from the US Secretary of Defense, Austria’s Silver Cross of Merit with Star of the Republic and Germany’s Cross of Merit, First Class for his singular contribution to the German Unification.