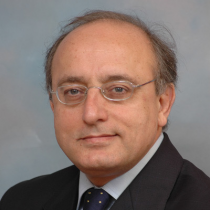 Mohsen Sazegara was an activist in the Islamic Revolution of Iran in 1978-79 and a member of the Liberation Movement of Iran, in the Diaspora. At the time, he was studying in Chicago and then moved to France.  In October 1978, when Ayatollah Khomeini, exiled in Iraq, relocated to France, Sazegara was an aide of Mr. Khomeini’s. Sazegara returned to Iran with Mr. Khomeini and was one of the founders of the Islamic Revolutionary Guards Corp (IRGC). He was also a member of its first commanding board. Sazegara accepted different government positions in the first decade after the revolution, including as the director of Iran’s National Radio; a deputy in the Prime Minister’s Office for Internal Political Affairs; Under Secretary of Heavy Industries; CEO of Iran’s biggest government-owned industrial conglomerate, Industrial Development and Renovation Organization (IDRO); and the deputy of the Planning and Budget Organization.

Sazegara did not accept any government positions after 1988. Instead, he chose to publish three newspapers and two monthly magazines, which were eventually shut down by the government. He then became an active and influential participant in the Religious Intellectual Movement, Reformist Movement, and the Green Movement.  Sazegara has been arrested and imprisoned four times in Iran.

Sazegara has studied Mechanical Engineering, Physics and History, and has been a visiting scholar at Yale and Harvard universities.  He has also been a visiting fellow at the George W. Bush Presidential Library and Museum for four years and the Washington Institute for Near East Policy for six months. Sazegara was born in Tehran in 1955. He is married and has two sons. He lives in a suburb of Washington, D.C.