Is Ahmad al-Oda winning the “hearts and minds” of Daraa’s people? 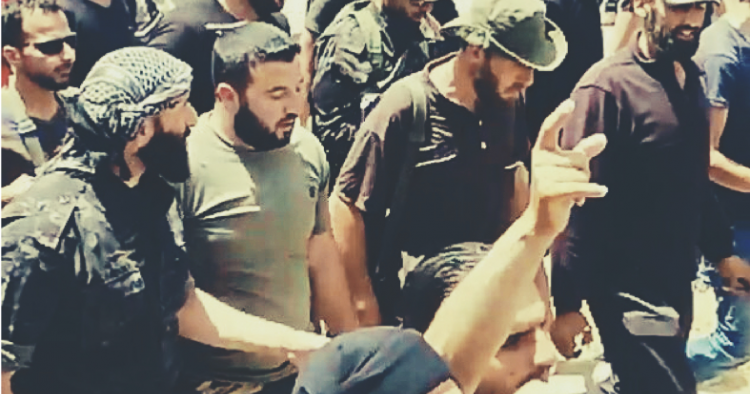 On June 20 a bus carrying soldiers from the Eighth Brigade of the Fifth Corps, travelling from Latakia to Busra al-Sham, hit a roadside improvised explosive device (IED) near the town of Kahil in eastern Daraa. The IED, consisting of an estimated 700 kg of explosives, blew the bus up and flipped it over, leaving nine dead and 13 injured. Later that day, a protest erupted in the town of Busra al-Sham, the headquarters of the Eighth Brigade, against Hezbollah and Iran’s presence in Daraa. The following day, the funeral for the nine soldiers who died in the IED attack quickly turned into the largest protest Daraa has seen since 2018, including both Eighth Brigade fighters and hundreds of civilians from several nearby areas. The protesters marched into town, with a crowd stretching for several blocks, as they chanted anti-regime slogans and denounced the presence of Iran and Hezbollah in southern Syria.

The important questions that come to the forefront now are the following: who was behind the attack, and what are the implications? Speaking to the author on the condition of anonymity, several sources close to the Eighth Brigade in Busra al-Sham indicated that ISIS sleeper cells might have been behind the attack, although it is more likely that it was orchestrated and carried out by “collaborators with Iran and Hezbollah” since it best serves their interests at present. There are several reasons for this. First, Iran and Hezbollah see the Eighth Brigade as an actor that impedes their plans to establish a long-term presence in Daraa. Indeed, the backbone of the Eighth Brigade are former rebels who harbor enmity toward Iran-affiliated groups and serve to curb their ambitions to establish a foothold in the eastern region of Daraa. Weakening the Eighth Brigade would not only allow Iran and Hezbollah to be more active in eastern Daraa, but also to penetrate Busra al-Sham, the main Shi’a population center in southern Syria, whose displaced Shi’a families are not allowed to return to the town by Ahmad al-Oda, the former leader of the Sunna Youth Forces rebel group and current commander of the Eighth Brigade.

Second, in June 2020, at least 7,000 military defectors, deserters, and draft evaders from Daraa registered their names at the headquarters of the Eighth Brigade. While this took place at a time when the Syrian Arab Army and security apparatuses have been exhibiting discontent, this large turnout and potential addition of manpower to al-Oda’s side is no doubt alarming for Iran and Hezbollah and poses a great threat to their presence in southern Syria. According to a local source close to the Eighth Brigade speaking on condition of anonymity, the attack is designed “to interrupt the process of training a high number of military defectors and draft evaders who are craving to uproot Iran and Hezbollah from Daraa.”

The appearance of al-Oda and his participation in the funeral and the subsequent march with the protesters in Busra al-Sham shows his prioritization of Daraa’s interests and his preference to side with its people. Indeed, whether or not people blame him for Daraa’s fall to the Syrian regime in 2018, al-Oda has proved to be the only former rebel leader who has reaped the benefits of the post-rebellion period, secured a significant role in local politics, and most importantly, exhibited a capacity to mobilize popular support that extends beyond the eastern region of Daraa — all of which is in sharp contrast to the atrophying role of the Central Negotiations Committee (CNC), another group of former rebel leaders, activists, local notables, and lawyers concentrated in Daraa al-Balad and Daraa’s western region.

Besides targeting ISIS sleeper cells, countering the presence of Iran and Hezbollah in Daraa would be the main factor underlying an upcoming increase in the level of violence, a situation that Russia might be forced to accept given its inability, or unwillingness, to keep Iran and Hezbollah out of Daraa, as it promised at the end of negotiations in summer 2018. Al-Oda’s participation in the Busra al-Sham protest is highly symbolic, and the arrival of hundreds of Daraa’s tribal sheikhs and notables to attended the condolence ceremony in Busra al-Sham on June 22 conveys a message: a former rebel leader may lose the war but win the people’s hearts and minds on a different battlefield. As one civilian from the eastern region of Daraa put it, “Whether people like or hate him, al-Oda proved to be smart and willing to defend us. […] He is the last hope to liberate Hauran from occupiers, Daraa should stand on his side.”

Abdullah Al-Jabassini is a non-resident scholar with MEI’s Syria Program, a Ph.D. candidate in international relations at the University of Kent in Brussels, a researcher for the Wartime and Post-Conflict in Syria project at the Robert Schuman Centre for Advanced Studies at the European University Institute in Florence, and a former visiting scholar at the European University Institute. The views expressed in this piece are his own.