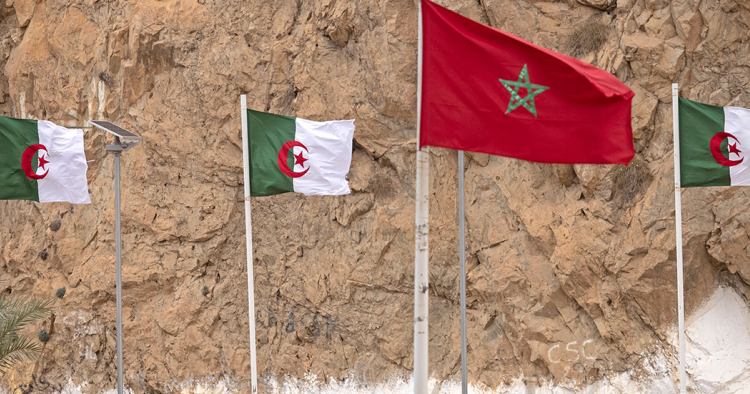 On Nov. 1, three Algerian citizens were killed in the disputed territory of Western Sahara. The Algerian presidency issued a statement accusing Morocco of carrying out an attack with a “sophisticated weapon” on two Algerian transport convoys. This was only the latest episode in a process of escalation between the two countries. The Algerian authorities had previously cut their diplomatic relations with Morocco on Oct. 24 due to rising tensions. Even though the relationship between Algiers and Rabat has long been contentious, the death of three Algerian citizens could prove to be a turning point.

In its statement, the Algerian presidency promised retaliation but without detailing its response. On Nov. 5, Algerian Foreign Minister Ramtane Lamamra addressed the United Nations and other international organizations, stressing that Morocco’s “act of state terror” was dangerous for regional stability. Algiers opted for diplomatic lobbying over military retaliation; however, this may change as Algerian authorities promised that the death of their citizens “will not go unpunished.” In fact, Minister of Interior Kamal Beldjoud asserted that Algeria will ensure the safety of its borders and alluded to a major security deployment.

According to reports, the Nov. 1 attack took place in the territories controlled by the Polisario Front, the national liberation movement in Western Sahara. In that sense, the incident is not the first, but it does mark an important escalation. Two transport convoys were returning from the Mauritanian capital of Nouakchott to Ouargla in southern Algeria when they were hit by targeted drone strikes. According to experts, the convoys were easily identifiable, which suggests that the attack was not a mistake. Rabat did not issue a statement to confirm or deny Algiers’ allegations. On Nov. 6, the anniversary of Morocco’s 1975 Green March into Western Sahara, King Mohammed VI reiterated that Rabat will maintain its sovereignty over the disputed territory. Yet, he insisted that Morocco prefers a “peaceful settlement.”

In light of this recent incident, it is clear that Western Sahara is rapidly becoming the site of an armed conflict. Until last year, the disagreement between the Moroccan army and the Polisario Front remained a political one, with occasional security tensions. But in November 2020 the Saharawi leader of the Saharan Arab Democratic Republic (SADR), Brahim Ghali, announced the end of the 29-year cease-fire with Rabat. The death of the three Algerians is another urgent reminder that there are pressing security threats even in the territories considered “liberated” by Saharawi forces. Moreover, even if such incidents are not representative of the tensions in the region, they do suggest a direct military confrontation is possible.

For decades, the issue of Western Sahara has served as a bargaining chip in Algerian-Moroccan relations. Rabat has continually seen Algiers as an ally to a separatist group. For its part, Algiers considers the issue as one of decolonization, while sustaining its diplomatic and military support for the Polisario Front. Until recently, both capitals managed to keep their disagreements under control, but now other historical and geopolitical realities are shaping this new escalation.

Since the era of former President Houari Boumédienne, caution and concern about Morocco has shaped the perceptions of the Algerian political class. The wariness of Algerian authorities regarding their western neighbor stems from national sentiments that followed the 1963 Sand War between the two countries. Algerian President Abdelmadjid Tebboune and the military leadership have repeatedly stressed the memory of the conflict. Rabat’s recent rapprochement with Israel has further complicated any possibility of a diplomatic settlement with Algiers. Thus, the current situation between Algeria and Morocco has been the result of a series of smaller steps toward a crisis.

In addition to the historical factors at play, larger geostrategic differences have also contributed to the current situation. On Nov. 1, Algeria cut its supply of natural gas to Morocco through the Maghreb-Europe Pipeline. This came after weeks of uncertainty, during which Algiers took radical measures such as banning all Moroccan civil and military aircraft from its airspace. Despite Rabat’s insistence that such decisions have no impact on Morocco, they are a symptom of an ongoing struggle for regional supremacy. Neither Algiers nor Rabat is willing to step back, as they have two distinct and potentially confrontational visions for North Africa. Algiers views the region exclusively through the latter’s history and anti-colonial struggles while Rabat defends a liberal, untraditional agenda in a realpolitik manner. The allies, strategies, and escalations of Algeria and Morocco clearly indicate the onset of a regional cold war.

In recent months, tensions between Algiers and Rabat have reached the limits of diplomacy. After several political incidents, the situation is now at the point of military escalation. A full-scale war is still avoidable, however, if Algerian and Moroccan authorities can be convinced to settle their disagreements peacefully. That will require the active engagement of international organizations to address the underlying drivers of conflict, including the issue of Western Sahara. At the same time, the neutrality of Algiers’ and Rabat’s international partners, including Europe and the United States, is critical to ensure stability.

Both at the official and popular levels, Algerians are exploring the limits of their relationship with the Moroccans, and this is part of a broader national process of reshaping Algeria’s political system and society. This is a process that will determine the future — and limits — of cooperation in North Africa. While the pursuit of regional supremacy is concerning, this competition does not necessarily have to lead to open conflict.

At present, it seems as though North Africa has entered a new and riskier period of geopolitical tensions. The recent clashes between Algeria and Morocco are an expression of an old rivalry that can no longer be disregarded. The regional instability created by these tensions may become permanent. After years of the status quo, a cold war has erupted and, unless addressed by the international community and both countries, it could lead to a military confrontation. So far, Algiers is only mobilizing its diplomatic corps because military escalation would be costly and politically unpopular. But that should not be read as a sign of Algiers’ incapacity or unconditional acceptance of the status quo, since that could change quickly as a result of military aggression in the region.

For Mali and the Sahel, New Tensions and an Old — and Worsening — Security Problem