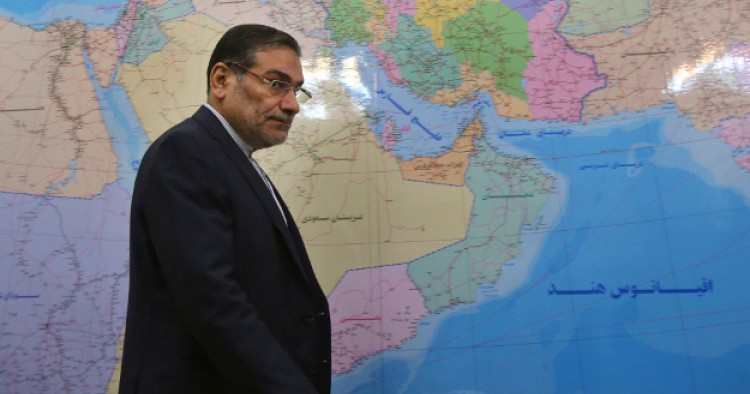 Read the full article at The National Interest.

Iranian-Saudi relations are once again slipping. A new round of war of words is in the works, each side blaming the other for scorched-earth policies that are fueling the fires of conflict across the Middle East. It was meant to be different by now. It has been over a year since Hassan Rouhani’s election and his pledge to reset ties with Riyadh. The on-again/off-again process of détente, however, was never meant to be a breeze, given the troubled history of Iranian-Saudi relations. It was in this grueling context that Rouhani’s appointment of Ali Shamkhani—the most prominent ethnic Arab in Iran’s state apparatus since 1979—caused so much hope. Shamkhani was thought of as Rouhani’s bridge-builder to the Arab World, but he has yet to prove transformational on that question. In fact, Shamkhani’s fame is rooted in his deftness to hit back against hardliners on the home front. He is an old Revolutionary Guardsman who over the years moved to Iran’s political center. But he is no regime dissenter, and don’t expect him to defy the policy consensus in Tehran.

It was in September 2013 that President Rouhani appointed the fifty-nine-year-old Shamkhani as the head of Iran’s Supreme National Security Council (SNSC), a key organ in Tehran that makes strategic defense and security policies under the guidance of the Supreme Leader, Ayatollah Ali Khamenei.

Reformists and moderates in Tehran were delighted by Shamkhani’s appointment.

He is a practical, moderate voice that succeeded Saeed Jalili, an austere hardline ideologue who was, by the end of his term at the SNSC, ridiculed as a novice with a faint notion of the ways of international diplomacy. Even Ayatollah Khamenei’s chief foreign-policy advisor, Ali Akbar Velayati, publicly scolded Jalili for his diplomatic ineptitude that was deemed to only have exacerbated Tehran’s international troubles.

Shamkhani’s appointment by Rouhani was meant to help undo the damage done by Jalili and the man who appointed him, former president Mahmoud Ahmadinejad. Shamkhani’s moderate track record, however, in no ways makes him a regime outsider. He is very much a product of the Iranian Revolution of 1979 and the coming of the Islamic Republic. To say this, his regime credentials run deep. While he was nominated by Rouhani, Shamkhani’s arrival at the helm at the SNSC would not have been possible without the approval of Supreme Leader, Ayatollah Khamenei. Khamenei, who has known Shamkhani since their working days together during the Iran-Iraq war, opted to appoint him as one of his two personal representatives to the SNSC on top of Shamkhani’s role as the head of the council.