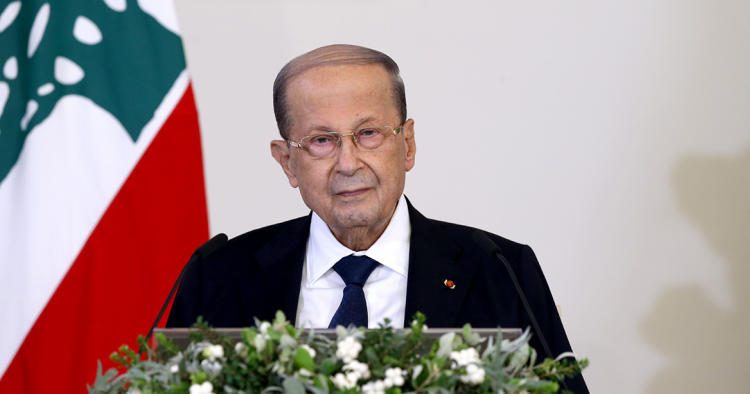 “There remain only a few rich people and many poor. Ninety percent of Lebanese are poor today. They sell what is left of their possessions to survive. I'm afraid of an economic catastrophe ahead because of corruption, mismanagement, and plundering of public funds and resources.” Words spoken by outgoing President Michel Aoun back in 1995. It is far from ironic that this is exactly the state Aoun leaves Lebanon at the end of his presidency in 2022, given his deliberate hand in leading the country to this tragedy.

Back then, as an exiled leader determined to reclaim Lebanon’s presidency after being driven out by Syrian forces in 1990, Aoun claimed to seek “a modern state, a state of law, all while respecting public liberty; an honesty in the administration of the state.”

The obstacle to this “modern state,” Aoun had us believe, were outsiders, primarily the “pyromaniac firefighter” that was Hafez al-Assad’s Syria — a position Aoun conveniently surrendered when he allied himself with Hezbollah, visiting Damascus in 2008 when it became apparent the path to power ran through Hezbollah and its own partnership with the Syrian regime.

The truth, however, is that Lebanon’s ailments were always rooted in Lebanon. And Aoun’s talk of a modern state appeared to be a smokescreen to mislead those who followed him into thinking the path to reform lay with the general.

As the past six years have made all too clear, his objective seemed squarely fixed on gaining a permanent seat for himself at the table of Lebanon’s sectarian elite and securing his legacy.

The evidence lies in the abysmal state in which Aoun has left the country. During his presidency, Lebanon’s economy plunged into the “most devastating, multi-pronged crisis in its modern history.” Roughly 82% of the population are now impoverished, largely driven by the sharp loss in the value of its currency: 40,000 pounds buys $1 today, up from 1,500 pounds in 2019. Bank deposits are frozen, pensions are worthless, and prices are skyrocketing — inflation was 154% in 2021.

For the first nine months of 2021, Lebanon sat without a government while the economy collapsed. There was no government to respond to the crisis, engage with potential foreign donors, shepherd through desperately-needed legislation, or issue emergency support funds for people sinking into poverty. As reviled as much of the Lebanese elite is, not having a government to at least operate at a basic level of state functionality made an already dire economic situation far worse.

Aoun was largely responsible for the political impasse with then-Prime Minister Saad Hariri that prevented the formation of a government. The firebrand leader is reported to have insisted on conditions, including on granting himself greater powers and demanding that his party, the Free Patriotic Movement (FPM), retain key ministries, notably the energy portfolio. Instead of responding to the crisis with a sense of urgency and forming a government with haste, the president forewent his public responsibilities and expended his efforts on expanding his own power and that of his associates.

Obstruction — withholding his signature and support needed to form a government — was a weapon frequently deployed by the president for self-serving means, even as circumstances became increasingly dire for the Lebanese people. In fact, Lebanon was without a government for nearly half of Aoun’s time in office, often due to the president’s refusal to sign decrees accepting a new prime minister or government unless his conditions were met.

This gross dereliction of duty pales against the calamitous negligence of allowing stockpiles of ammonium nitrate to sit in Beirut’s port for years, resulting in one of the world’s largest non-nuclear explosions in August 2020. Aoun was well aware of the ammonium nitrate before the blast and did nothing about it. Afterwards, instead of immediately pursuing a fact-finding mission, Aoun rejected an international probe as “a waste of time” and refused to dismiss senior officials implicated in the explosion.

Gebran Bassil, Aoun’s son-in-law and current FPM leader, claims the president isn’t responsible for these disasters, that fault lies with the various factions that veto every attempt to move forward. It’s true, the president’s powers were reduced in 1990 under the Taif Accord to better balance power between Christians and Muslims. (Under Lebanon’s confessional system, the president must always be a Maronite Catholic and greater executive authority before 1990 skewed power in favor of the Maronites). And it’s true, Lebanon’s corruption extends to all sects and factional leaders.

But to claim Aoun was lacking in influence, a feeble bystander unable to affect the course of events, is false and exonerates him from responsibility. Aoun has effectively expanded the role of the FPM in government since his alliance with Hezbollah in 2006, making it one of the most powerful players in the country.

Take, for example, the FPM’s handling of the coveted energy ministry, which it held for much of the last decade and Aoun insisted upon retaining during his 2021 deadlock with Hariri. In lieu of reforming and modernizing this vital state institution, Aoun’s party willingly enmeshed itself in its corrupt operation. The state electricity provider, Electricitė du Liban (EDL), bleeds billions in annual losses while daily power cuts across the country have worsened.

EDL has a bloated workforce and operates under a clientelistic system whereby jobs are distributed to “those close to politicians and senior members of the public administration.” This is a hallmark typical of the Lebanese public sector, where factions that hold ministerial portfolios stack those departments with family, partisans, or loyal supporters. And that nepotistic rot starts at the top: For years, Aoun has been grooming his son-in-law Bassil to succeed him, first within the party, and preferably now as president.

Moments came for Aoun to show his quality as leader, and each time he floundered. When Lebanese flooded the streets in October 2019 demanding the very “modern state” Aoun claimed to seek, the president threatened protesters with a “catastrophe” if they continued and mocked them to “emigrate” if they weren’t happy.

While Aoun acknowledged corruption was “deeply-rooted in our authority, institutions, and administration,” his son-in-law was slapped with U.S. sanctions for “his role in corruption in Lebanon.”

And one cannot overlook the failure that has been his alliance with Hezbollah. It may have been rewarding for Aoun as it guaranteed his presidency and the FPM's dominance in politics, but it has been dreadful for Lebanon as the state has only eroded into a basket case. Aoun never truly attempted to integrate Hezbollah into the Lebanese state, because building a “modern state” was seemingly never Aoun’s actual aim. There’s no greater obstacle to a modern state than a heavily armed militia operating its own fiefdom beyond the powers of the central authority — a fact Aoun all too readily accepted if it resulted in a chair in the presidential palace.

Aoun, with no powerful family name and a military pedigree, sought to market himself as the modern reformer after the civil war. But it’s clear now, as it always has been to those who paid attention, that Aoun’s ultimate desire was never to do away with the corrupt state, but to take a slice of it.

His legacy? Exactly as he prophesied: a people drowning in poverty, and a country robbed of its future.

Antoun Issa is a journalist and commentator on Middle Eastern affairs, with a particular focus on civil society and grassroots efforts to improve governance post-Arab Spring. He is a non-resident scholar with MEI and the offplatform and newsletters editor for The Guardian Australia.