Are the foreign patrons of the Libyan war ready to end it? 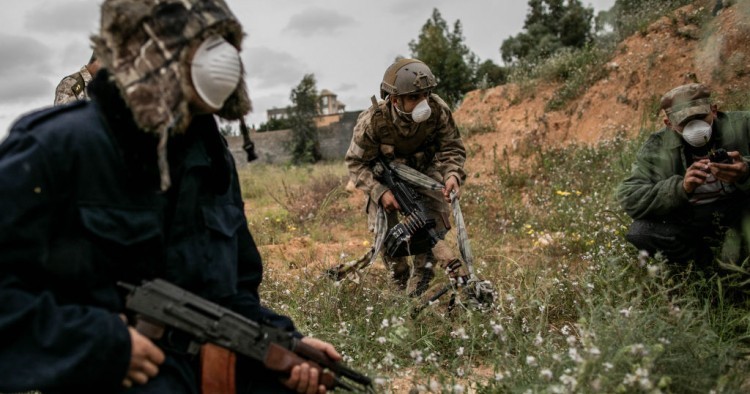 Absent major military escalation by his foreign patrons, Khalifa Hifter has now lost the war he initiated against Libya’s internationally recognized government in Tripoli. The question remains, however, of how to end Libya’s proxy war and restart the necessary political process to bring about sustained peace.

The May 18 capture of Watiya air base by fighters aligned with the Tripoli-based Government of National Accord (GNA) from Hifter’s Libyan National Army (LNA) not only represented a profound strategic loss for Hifter, but also the apparent collapse of his effort to take Tripoli and establish personal rule over all Libya.

Reflecting the magnitude of the loss amid the withdrawal of Hifter’s troops from Tripoli’s southern frontlines, the two major big-power patrons of the warring parties, Russia and Turkey, have again called for a cease-fire and the resumption of political talks. Russia appears to have gone further — evacuating its mercenaries from Tripoli to an undisclosed location — perhaps the al-Jufra air base in central Libya, where Russia has reportedly sent six MiG-29 fighters and two Su-24 attack jets.

Meanwhile, Hifter’s main Middle Eastern backers, Egypt and the UAE, have begun to state quietly that supporting Hifter’s war was a bad bet that they will never make again.

Amid Hifter’s humiliating defeat, his foreign patrons have renewed diplomatic outreach to Aguila Saleh Issa, the speaker of the House of Representatives, Libya’s Tobruk-based Parliament. On April 27, Hifter announced that the UN-brokered Libyan Political Agreement establishing the GNA was “null and void” and declared himself ruler of all Libya. In response, Aguila stated that since Hifter had now lost the war, Russia was supporting him instead.

The main scenarios for Libya in the near term were laid out on May 19 by the UN acting special representative of the secretary-general, Stephanie Williams, in a brutally tough-minded briefing to the UN Security Council. They include the possibility of a last-ditch war effort by Hifter that his air force chief promised would be the “largest aerial campaign in Libyan history” against Turkish targets in the country. On May 26, AFRICOM warned publicly that the newly arrived Russia military aircraft could be providing air support for that — or preparing to seize bases on Libya’s coast, threatening Southern European air security for the long term.

Consistent with their public call for a cease-fire, Russia, the UAE, Egypt, and France for the LNA, and Turkey for the GNA could shut down air attacks by both sides through ceasing to provide the intelligence and guidance needed to make them effective. Each of these countries has repeatedly endorsed a cease-fire since the Jan. 19 Berlin summit sponsored by German Chancellor Angela Merkel, even as they have engaged in rearming their Libyan clients and participated in attacking their Libyan opponents. But despite Russia’s deployments, Turkey is currently seen by the Western countries as the main foreign barrier to a cease-fire, despite its public stance, for obvious reasons: Turkey’s side is now winning and could well retake control of additional Libyan territory if Turkey continues to provide air support (and mercenaries from Syria) for a little while longer. On May 21, Germany, the UK, and France jointly asked Turkey to stand down. U.S. Secretary of State Mike Pompeo reiterated the message to Libyan Prime Minister Fayez al-Serraj the following day. President Donald Trump then made the same point to Turkish President Recep Tayyip Erdogan on May 24.

A sustainable end to the proxy war would have to address arms shipments by land through Egypt and from Sudan involving Russia and/or the UAE, as well as Turkish shipments by sea, and transport by air of military materiel by the principal patrons of the war. It would also have to address the respective parties’ asserted economic interests in Libya, including Turkey backing off from its plans to begin drilling for oil in the eastern Mediterranean in derogation of other — especially Greek — interests.

Any cease-fire deal should include resumption of Libyan oil exports, shut down by Hifter in January to intensify pressure on the GNA. Resumption of these exports would provide renewed hard currency for the country to buy food, medical supplies, and other vital imports.

Stopping the proxy war would help counter the growing COVID-19 humanitarian crisis, exacerbated by rocket attacks on hospitals that have killed doctors and damaged the country’s ability to respond to the pandemic.

A return to the UN roadmap

The UN political roadmap for Libya remains the only realistic path to regain economic viability, political stability, and physical security against terrorists, criminals, and civil conflict. Any short-term deal could enable Libya to generate sufficient revenue to provide the basics to its people. Political stability in even the medium term could put money in the pockets of ordinary Libyans, enable efforts to rebuild national institutions, and distribute revenues to localities to provide services locally, giving every Libyan a stake in the country’s future.

None of this is possible until the foreign actors in the proxy war accept Libya as an independent sovereign country with its own national interests, rather than treating it as a playground for their competing ambitions.

The U.S. could play an important role in achieving an agreement to reinforce the UN process and combat foreign military involvement in domestic Libyan affairs through confidence building measures to assure the foreign patrons that a unified Libyan government would not be dominated by any other foreign state. It is far from certain that Russia, Turkey, Egypt, and the UAE would accept this result rather than one in which they retain competing, if inherently unstable, spheres of influence. But one can at least imagine their accepting some deal so long as their opponents don’t “win” and they don’t “lose.”

Given his character, history, and intentions, Hifter will do what he can to turn any cease-fire into an opportunity to resupply and restart the war as circumstances permit. Hifter first declared himself in charge of Libya in February 2014. His forces have carried out apparent war crimes. For Hifter, there is no Plan B. Even as he loses support among Libyans, the question of what to do with him remains. Previously, Hifter spent decades in exile in the United States. If his foreign sponsors want to see Libya stabilize, and choose to accept pluralistic solutions rather than winner-takes-all, perhaps one of them could make the humanitarian gesture of providing him a home in a quiet gated community somewhere in the Gulf.

Jonathan M. Winer is a scholar at MEI and has been the U.S. special envoy for Libya, the deputy assistant secretary of state for international law enforcement, and counsel to U.S. Senator John Kerry. The views expressed in this piece are his own.