Balance in the Black Sea: The complex dynamic between Turkey, Russia, and NATO 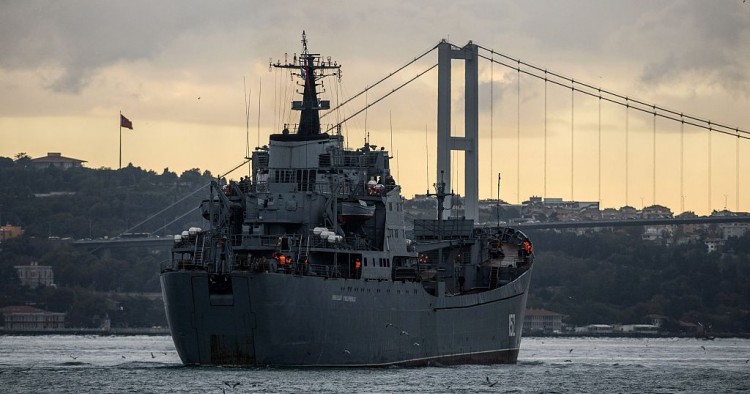 Turkey’s relations with its Western allies are at an all-time low while its partnership with Russia is flourishing. Since Russia began delivery of its S-400 advanced aerial defense system in July, questions have abounded about Turkey’s future in the NATO alliance. Such concerns are not baseless. Turkey-Russia ties have never been closer. The two countries cooperate closely not only on energy and trade but also in the defense sector. But fears of a Turkish withdrawal from the alliance overlook the continued tension between Ankara and Moscow, which makes NATO an indispensable partner for Turkey.

One such area where Turkish and Russian interests collide and NATO is critical to Turkish strategic interests is the Black Sea, where Turkey has long sought to become a key actor. After the Cold War, Ankara tried to expand its influence by engaging Turkic communities in the former Soviet republics and laying the foundations for trade. A key component of Turkey’s Black Sea strategy was excluding the West from regional initiatives. A NATO presence in the Black Sea, Ankara thought, would overshadow its role in the region, increase the risk of confrontation with Russia, and deal a blow to the legitimacy of Turkey’s initiatives. To that end, it excluded NATO from the Ankara-led Black Sea Naval Force (BLACKSEAFOR), a maritime security initiative launched in 2001 that included littoral states. Another Turkey-led initiative was Black Sea Harmony, which emerged as an alternative to NATO’s Active Endeavour mission to tackle transnational terrorism and smuggling.

While Turkey tried to keep Western allies out of the Black Sea, it accommodated Russia’s security concerns. When Russia invaded Georgia in 2008, the West condemned the invasion, but Turkey chose to bandwagon with Russia. Despite early promises of support to its close partner Georgia, Turkey changed tact and barred two U.S. hospital vessels from crossing through the Bosporus into the Black Sea, prompting protests from Western capitals.

Russian annexation of Crimea in 2014, however, has changed Ankara’s thinking.

The seizure of Crimea has tilted the balance of power in the Black Sea in Moscow’s favor. Russia enlarged its exclusive economic zone significantly. Its coastline grew to 25 percent of the sea’s total shorefront, almost equaling the length of Turkey’s shore. By building up its combat and maritime law enforcement capabilities, Russia has taken Turkey’s place as the dominant maritime power in the region. It has placed advanced surface combatants and submarines in its Black Sea Fleet and S-400 systems on the peninsula. Annexation of Crimea also boosted Russia’s military presence in the eastern Mediterranean, another crucial region for Turkey. Russia uses the ports in the Black Sea to deliver supplies to its military operations backing the regime of President Bashar al-Assad in Syria. Dozens of Russian warships, auxiliary naval cargo ships, and submarines have passed through the Turkish Straits, which connect the Black Sea with the Aegean and the Mediterranean.

The changing balance of power in the Black Sea has prompted Turkish fears that the region has become a “Russian lake.” Speaking at a 2016 Balkan security conference in Istanbul, Turkish President Recep Tayyip Erdogan asked his NATO allies to step up efforts to balance Russia. Threatened by growing Russian influence, Turkey abandoned its long-time policy of keeping NATO out of the Black Sea and supported efforts for a stronger alliance presence there. Turkey backed Romanian calls for a permanent NATO fleet in the Black Sea to counter Russia. Ankara saw the decision to increase the alliance’s position in the region through the creation of the Tailored Forward Presence and a maritime coordination function as important steps to counter Moscow.

Turkey has taken other steps as well to keep Russian influence in the region in check. Ankara supports pro-Western countries such as Ukraine and Georgia and backs NATO’s enlargement. In the last few years, Turkey has cultivated close defense and economic ties with Ukraine. Most recently, state-controlled Ukrainian company Ukrspecexport and privately owned Turkish drone specialist Baykar Makina signed an agreement to develop and produce “sensitive technologies in defense and aerospace.” Turkey works closely with Georgia as well. The Baku-Tbilisi-Kars railway line, which bypasses Russia (and Russian sanctions), went into service in 2017. Last year, the Trans-Anatolian Pipeline (TANAP), which carries gas from Azerbaijan via the South Caucasus pipeline extension through Georgia, started pumping gas, circumventing Russia.

Despite deepening ties between Turkey and Russia and Ankara’s decision not to join Western sanctions against Moscow, Turkey sees growing Russian influence in the Black Sea as a threat and leans on NATO as a safety valve. Turkey-Western relations may be at an all-time low, and Russia-Turkey ties might be their closest ever, but Turkey is not leaving NATO anytime soon.

Gönül Tol is the Director of MEI's Turkey Program. The views expressed in this article are her own.