The benefits and challenges of UAE-Israel normalization 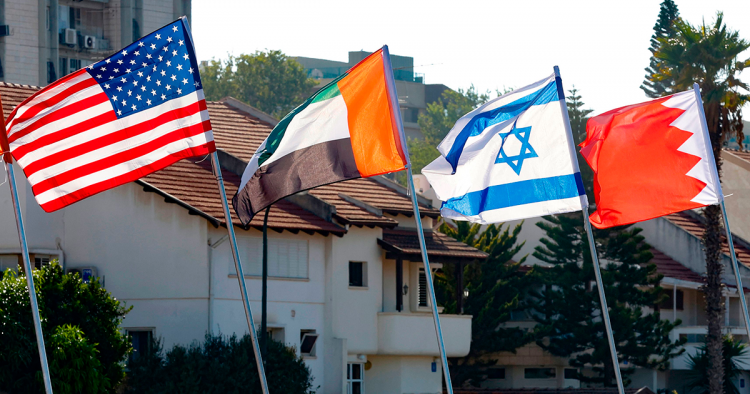 Israel and the United Arab Emirates (UAE) have initiated a process that, if it comes to fruition, will bring about the normalization of relations between the two countries. The media frenzy that started with the Aug. 13 joint announcement focused on the dividends that Israel, the UAE, and the region will reap from the formalizing of relations between the two countries. When the potential pitfalls were discussed, they focused on Israel freezing West Bank annexation and the possibility that the UAE will be allowed to acquire the F-35 advanced fighter jet, which could erode Israel’s qualitative military edge (QME). The broader geostrategic challenges that the agreement could pose for Israel and the UAE have not been part of the public discourse, however, and any balanced treatment requires a discussion of those aspects as well. This is not to take away from the importance of the development, but rather to provide a more comprehensive view of the potential implications of normalization in order to better prepare for them.

It has been observed, and correctly, that Jerusalem and Abu Dhabi assess the region similarly, though not identically. Both view Iran and Turkey as national security threats, and the dangers Tehran and Ankara pose are amplified by Washington’s stated intention to reduce its military footprint in the Middle East. The overlapping Israeli and Emirati national security threat perceptions explain why security and intelligence cooperation predates the Aug. 13 announcement by many years. To be sure, the recent agreement provides a more solid footing for such cooperation, but going public may lead to the exposure of some elements that would be best kept in the shadows. It is to be expected that friction will persist between two competing interests — on the one hand, the desire to publicly celebrate the agreement and ensuing cooperative achievements and on the other, the need to keep certain aspects of cooperation out of public view.

The normalization agreement will also publicly and officially position Israel and the UAE together, which will present its own set of complex challenges and possible risks. The agreement exposes the UAE to criticism, provocations, and potentially even threats to its national security from Iran, though Iran is not alone in its opposition to the agreement. Turkey has harshly criticized the UAE’s recent steps, and it is possible that it will take actions in response, such as providing increasing support (presumably funded by Qatar) to Islamist factions throughout the region that seek to thwart the UAE’s Middle Eastern agenda. In regard to Israel and the Turkish response, the agreement places Israel more firmly in the anti-Turkish/anti-Islamist camp at a time when there is growing friction between an increasingly assertive Turkey and the anti-Turkish bloc in the eastern Mediterranean. The sources of this tension are disputes over natural gas deposits in the eastern Mediterranean as well as growing Turkish involvement in Libya — both of which have non-negligible risks of developing into direct armed conflicts.

In addition, by publicly standing shoulder-to-shoulder with the UAE in Washington, Israel appears to be taking sides in the dispute between Abu Dhabi and Doha. The latter represents a channel for communication between Israel and Hamas as well as a source of essential financial support for Gaza, making Qatar a useful partner for preventing the simmering tensions between Israel and Hamas from erupting into another round of fighting. In this sense, the UAE will not seek to fill Qatar’s shoes and Israel will remain dependent on Qatari assistance. Under the circumstances, Qatar may opt to withhold its services to put pressure on Israel, highlight its own importance as a force for maintaining the status quo in that arena, and cast a negative light on the agreement.

By contrast, the UAE lacks any major source of leverage in the Palestinian arena as it has designated Hamas a terror organization and long since abandoned the Palestinian Authority (PA). The Palestinian leadership, in particular Mahmoud Abbas and his top advisors, remain disturbed by the UAE’s grooming of their potential rival or challenger Mohammed Dahlan. The PA leadership has even denounced Dahlan as responsible for influencing the decision of Abu Dhabi Crown Prince and de facto ruler Mohammed bin Zayed (MBZ) to normalize relations with Israel.

Normalization is expected to further distance the UAE from the Palestinian arena, and the Turks and Qataris may decide to increase their involvement in response. The latter two see the struggle for influence in Gaza, Jerusalem, and the West Bank as part and parcel of the broader campaign for Islamist influence in the Middle East. In the struggle between the Islamist axis led by Turkey and Qatar and the status quo axis led by Egypt, the UAE, and Saudi Arabia, Israel and the residents of Gaza may find that they are the ones that pay the price when the Islamist axis seeks to highlight its role as a force that ostensibly promotes stability.

It is true that Israeli-Emirati normalization erodes the Palestinian veto on Israeli relations with the Arab world and undermines the 2002 Arab Peace Initiative, which has failed to yield results over the course of nearly two decades. However, if one believes that Prime Minister Netanyahu was genuinely intent on annexing West Bank territory, he may have inadvertently reinforced the very “land for peace” paradigm he seeks to undermine by discarding those plans in exchange for normalization. In addition, the UAE has now gained significant leverage over Israel that will factor into Israeli decision-making in the Palestinian arena, particularly when Jerusalem is considering steps that do not align with Emirati interests. Should Israel and the UAE engage in a public spat on anything relating to the Palestinian issue, that would likely discourage those Arab or Muslim states weighing the prospect of normalization from moving ahead if it becomes apparent that these agreements are unable to influence Israeli policy in that regard.

For the UAE, the most important dividend from this agreement is not about the West Bank, security cooperation, or high-tech startups. Abu Dhabi’s aim is to improve the UAE’s image on Capitol Hill, as it has been tarnished in recent years by several issues, including the Emirati role in the Saudi-led campaign in Yemen, a country facing what humanitarian organizations consider to be “the worst humanitarian crisis in the world.” In strengthening its position in Washington, the UAE hopes to gain access to some of the more advanced security hardware and software that the U.S. was unwilling to provide until now, including armed drones, F-35 fighter jets, cyber capabilities, and intelligence tools.

Abu Dhabi is also concerned that, as a result of the highly polarized atmosphere in Washington, the Emiratis’ close identification with Donald Trump will haunt them if Joe Biden is elected president. If Biden wins on Nov. 3, the UAE may seek to push U.S. arms sales forward as quickly as possible to avoid the risk that Biden might put them on hold when he takes office in late January 2021 — and a rushed process will undoubtedly pose some hazards to Israel’s QME.

Gradually, rather than all at once, it will become apparent what the foundation of the Israeli-Emirati agreement is and what its terms are beyond the halting of annexation. The potential for normalization is important and should not be devalued, but it is worth highlighting additional aspects, beyond the dividends, to gain a more comprehensive picture and better prepare for potential future challenges.

Dr. Yoel Guzansky is a Senior Research Fellow at the Institute for National Security Studies (INSS) specializing in Gulf politics & security. Ari Heistein is a Research Fellow and Chief of Staff to the Director at the INSS. His research focuses on U.S. foreign policy, the U.S.-Israel relationship, Israeli strategy vis-à-vis Iran, and the Yemeni civil war. The views expressed in this piece are their own.