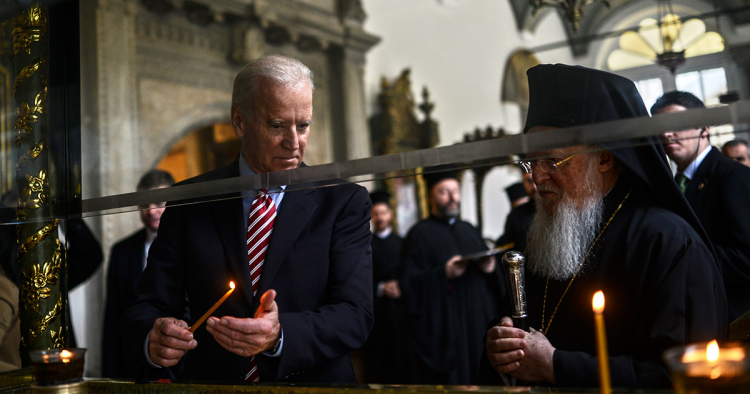 Bartholomew I, the Ecumenical Patriarch of Constantinople and spiritual leader of nearly 300 million Orthodox Christians globally, will visit the United States between Oct. 23 and Nov. 3. He will inaugurate the centennial celebration of the founding of the Greek-Orthodox Archdiocese of America in his first U.S. visit in 12 years. The Ecumenical Patriarch’s first stop will be Washington, DC, where he is due to meet with President Joe Biden at the White House. This in-person meeting provides the Biden administration a unique opportunity not only to raise human rights and religious freedom issues in Turkey but also to push back against Russian attempts to undermine the Ecumenical Patriarchate, which the Kremlin sees as a threat and targets with disinformation campaigns.

In September, Turkish President Recep Tayyip Erdoğan left New York without so much as a photo-op with his U.S. counterpart during the U.N. General Assembly. Although the two leaders had their first in-person meeting following Biden’s election as president on the sidelines of a NATO summit in June, Erdoğan later stated that Biden never raised the issue of Turkey’s problematic human rights record. The upcoming meeting with the Ecumenical Patriarch offers the U.S. president an opportunity to return to his administration’s promise of a human rights-centered foreign policy.

Discrimination and violations of religious freedom

The Ecumenical Patriarchate's dwindling flock in Istanbul is in dire straits, as is the Greek-Orthodox community elsewhere in Turkey. Although the Lausanne Treaty of 1923 granted legal protections and freedom of worship to Turkey’s non-Muslim minorities, Ankara has failed to fulfill its obligations prescribed not only by the Lausanne Treaty but also by the Turkish constitution and the European Convention on Human Rights. The Greek-Orthodox population of Istanbul, which was around 100,000 in the early decades of the Turkish Republic, declined to below 2,000 in less than a century. The community suffered from pogroms in 1955 and forced expulsions in the 1960s, and gradually became globally dispersed. The Greek-Orthodox community in Turkey continues to face systematic discrimination, expropriation of properties, hate crimes, death threats, and religious freedom violations.

The latest annual report of the U.S. Commission on International Religious Freedom (USCIRF) recommended Turkey be included in the U.S. Department of State’s “Special Watch List” for engaging in or tolerating severe violations of religious freedom. Among the issues highlighted in the report, Hagia Sophia’s conversion from a museum into a mosque in 2020 is a particularly hurtful development for the Greek-Orthodox world. The community, which has strong ties to the Byzantine sacred heritage of Constantinople, announced Hagia Sophia’s conversion as a day of mourning. Turkish officials’ use of a rhetoric of conquest during the conversion process has further undermined the notion of equal citizenship not only for the Greek Orthodox, but also for all non-Muslim minorities in Turkey.

A core issue that affects the future of Orthodox Christianity is Ankara’s shuttering of the Halki Theological School, which is the Ecumenical Patriarchate’s principal institution for training clergy. Turkish authorities closed the seminary in 1971, and despite growing international pressure, have resisted demands to reopen it. Over the years, USCIRF has repeatedly raised the issue in its annual reports. On July 29, 2020, on the 50th anniversary of the closing down of the seminary, the U.S. Department of State issued a statement urging Turkey to reopen Halki, asking Ankara to allow all religious groups to train their clergy in Turkey without obstruction. Given that Turkish law stipulates that the members of the synod that elects the Ecumenical Patriarch need to be Turkish citizens, resolving the issue of Halki is crucial for the survival of the faith and its institutions.

Turkey is also known for interfering in the internal affairs of non-Muslim minorities. In 2020, the government meddled in the elections of the Armenian Patriarch. Since 2013, the Turkish government has blocked non-Muslim community foundations from electing new board members, impeding critical decision-making processes, including fund raising, religious service provision, and restitution of confiscated properties. The lack of legal persona, which is the legal foundation for religious communities to run their affairs responsibly and autonomously, further exacerbates their problems. Legal persona is crucial for Turkey’s faith-based communities to carry out critical actions such as running a bank account, signing contracts, and owning and leasing property. The Turkish government’s restrictions on and interventions in the affairs of the country’s non-Muslim citizens, including the Greek Orthodox, significantly affect their daily lives and future.

In May 2021, members of the U.S. House of Representatives introduced H.R.3056 - Turkey and Ecumenical Patriarchate Religious Freedom Act. The bill highlights the importance of supporting the historic seat of the Ecumenical Patriarchate in Istanbul and asserts that the Turkish government needs to improve its actions to support the continuity and preservation of the Orthodox Church. The bill also demands that the State Department follow USCIRF’s recommendation and place Turkey on its “Special Watch List.”

Pushing back against Moscow

During his first month in office as president, Biden stated that the days of the United States “rolling over” to Russian President Vladimir Putin are gone, signaling a tougher policy against Moscow. Over the years, the Kremlin has not only targeted the Ecumenical Patriarchate with hacking attempts and information operations, but also propagated conspiracies surrounding Bartholomew I’s motives. Russian Foreign Minister Sergey Lavrov went as far as to claim that Bartholomew I’s mission, “apparently prepared by the Americans … is to bury the influence of Orthodoxy in the modern world.” Given that the Turkish government has been repeatedly complicit in the Kremlin’s efforts to undermine the Ecumenical Patriarchate, Biden should use his in-person meeting with Bartholomew I to push back against Russia’s hegemonic ambitions and the ways in which Putin instrumentalizes NATO member Turkey to this end.

The Ecumenical Patriarch’s U.S. visit will conclude with the opening ceremony of the Greek-Orthodox Church of Saint Nicholas at Ground Zero in New York. On the 20th anniversary of the 9/11 attacks, Elpidophoros, the Archbishop of the Greek-Orthodox Archdiocese of America — who, like Bartholomew I himself, is also a Turkish citizen — held a memorial service at the church, offering consolation and hope. The memorial service and the opening ceremony should also serve as a reminder to the Biden administration that the Ecumenical Patriarch’s upcoming visit offers a unique opportunity to connect not only with the Greek-Orthodox and the pro-democracy Turkish community in the United States, but also to fine-tune his policies toward Turkey and Russia.

Dr. Tuğba Tanyeri-Erdemir is a research associate at the University of Pittsburgh’s Anthropology Department, the coordinator of the Anti-Defamation League's Task Force on Middle East Minorities, and a non-resident scholar with MEI’s Turkey Program. She serves as the co-chair of the Middle East Working Group of the International Religious Freedom Roundtable. The opinions expressed in this piece are her own.