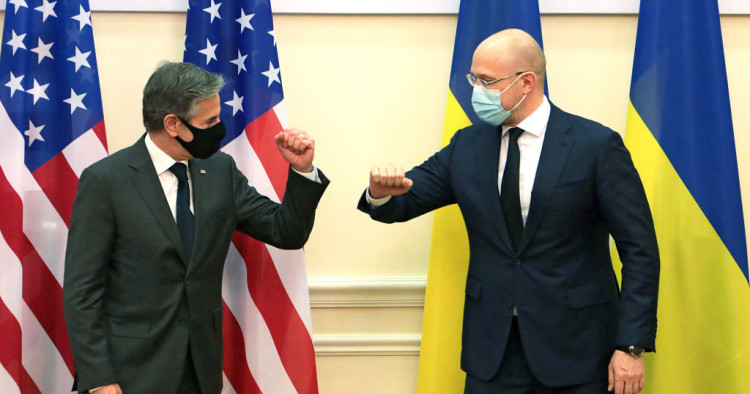 The recent visit of Secretary Anthony Blinken and Under Secretary Victoria Nuland to Kiev demonstrated the urgency of Ukrainian security and Russian aggression. The visit, however, occurred on shaky grounds, with three main obstacles preventing Ukraine from making significant progress in its partnership with the U.S. First, Ukrainian President Volodymyr Zelensky’s limited progress on democratic reforms. Second, Western Europe’s lukewarm support for Ukraine and against Russian aggression. And third, Russia’s diversionary policy.

The U.S. and Russia, rather than Ukraine itself, have caused Kiev’s prominence on the American agenda. Ukraine has played an infamous (and involuntary) role in American politics since the 2016 elections. The saga – the F.B.I only recently stepped up an investigation into Rudy Giuliani’s dealings with Ukraine by issuing a search warrant for his apartment – has kept Kiev at the forefront of U.S. minds with many now speculating illicit Ukraine-U.S. connections. Abroad, Ukraine has been the victim of yet another round of Russian aggression, which in April saw Moscow deploy 150,000 troops to Ukraine’s border and issue high-level threats to eliminate Ukraine as a country. This latest round of aggression left Blinken and Nuland no choice but to travel to Kiev.

But Ukraine’s problems run deeper than Russian military aggression. Ukraine’s slow progress on democratic reform under Zelensky’s leadership was highlighted just a few days before the visit. Zelensky made the mistake of firing Andriy Kobolyev, CEO of Ukraine’s largest company gas company and Naftogaz, and thereby interfering in a decision the Naftogaz board should have taken. Furthermore, the president proposed a new law to maintain cabinet control over state-owned companies.

Zelensky’s decision sparked an outcry from Naftogaz’s leadership and Ukraine’s Western supporters, including former U.S. Ambassador Marie Yovanovitch who said Kobolyev is “as clean as they come.” Naftogaz is also connected to Giuliani and President Trump’s impeachment, further highlighting Zelensky’s mistake which critics believe has undermined years of anti-corruptions reforms. It is unsurprising Blinken and Nuland announced good governance reforms as a priority issue for their visit.

Ukraine’s fight against corruption is the most important condition for American support. In 2015, then Vice President Joe Biden considered corruption to be at least as much of a threat to Ukrainian national security as Russia and pledged $190 million to anti-corruption measures. He said: “When Russia seeks to use corruption as a tool of coercion, reform isn’t just good governance, it’s self-preservation. It’s in the national security interest of the nation.” With Biden now president, the U.S. faces the dilemma of conditioning aid to reform while maintaining the vital support needed for Ukraine to defend itself from Russian aggression.

Meanwhile, Western European allies continue to turn a blind eye due to economic ties with Moscow. Germany, prominently involved in peace negotiations for Russian-created conflicts in Ukraine and elsewhere, is also a major obstacle to Transatlantic support for Ukraine. While Secretary Blinken has been able to secure a declaration of solidarity against Russia from Germany’s Foreign Minister Heiko Mass, the foreign minister has at the same time opposed the sale of German weapons to Ukraine (against the proposal of German Defense Minister Annegret Kramp-Karrenbauer). Berlin finds itself in an awkward position. On the one hand, Germany has been the lead on Ukraine peace negotiations since 2014. On the other, important German companies are now under U.S. sanctions for their engagement in Nord Stream 2 – a project which threatens Ukrainian security and independence.

While Western focus remains on Russia’s (now partially withdrawn) April military buildup, the buildup itself seems more of a diversion tactic. Moscow continues its strategic military expansion and aggression across the extended Black Sea. Since the annexation of Crimea, Russia has been strengthening its forces in illegally annexed Crimea to increasingly threaten both NATO and non-NATO territory and capabilities in the region. The April buildup was accompanied by Russia’s closing of an entire area of the Black Sea until October 2021, impeding free navigation and economically strangling Ukraine. When Russia restricted access in the Black Sea in 2018, Ukraine lost $360 million in economic revenues. Russia’s limits on Black Sea free navigation affects other regional, as well as Western, countries.

With every passing month, further military buildups and illegal troops surges increase Black Sea insecurity and leave U.S. strategic allies like Ukraine and Georgia more exposed. In the South Caucasus, 20 percent of Georgia’s territory was occupied by Russia in 2008 after NATO had promised Georgia and Ukraine a path toward membership (and protection from invasion from Russia). Now Georgia is at greater risk, with Russian troops in Nagorno Karabakh creating additional pressure from the South.

Blinken’s and Nuland’s visit to Kiev is a show of the support desperately needed by Ukraine and Black Sea allies. But it is a temporary fix in what should be a strategic American approach to deter future Russian aggression and bring security to the Black Sea. Only with regional understanding and a clear outlook of Russia’s strategy can the U.S., with the help of willing Western allies, prevent Moscow’s attempts to escalate conflicts and continue to project power into the Black Sea and beyond.

Iulia Joja is a senior fellow with MEI's Frontier Europe Initiative. The views expressed here are her own.