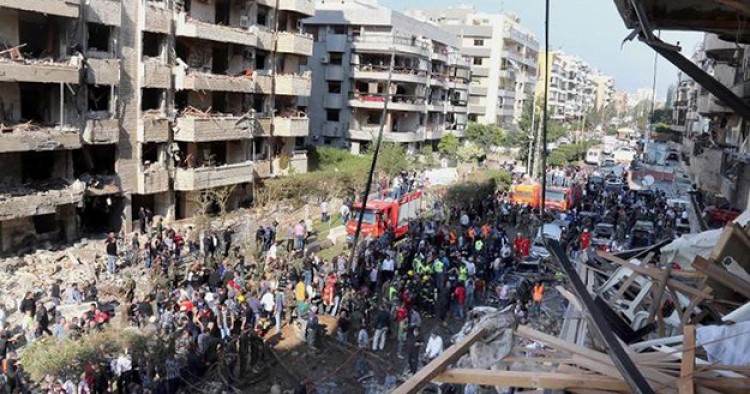 Earlier today, double explosions near the Iranian embassy in Beirut killed at least 23, including an Iranian diplomat. The Abdullah Azzam Brigades, an Islamist group with links to al-Qa`ida, took responsibility for the attack. MEI sat down with its Vice President for Policy and Research, Paul Salem, to discuss the significance of the bombings in Lebanon as well as their regional and global implications.

Tell us about the bombing and the group that claimed responsibility for it.

This is not the first event of its kind. There was a car bomb attack in the southern mainly-Shi`i suburbs of Beirut a number of months ago, followed by car bomb attacks in the northern mainly-Sunni city of Tripoli—perhaps in retaliation. This is the first major attack since then, and it is also the first one targeting the Iranian embassy directly. The earlier bombing effectively targeted Hezbollah, so this bombing ups the ante.

The bombing appears to be linked to the fighting in Syria. The Abdullah Azzam Brigades claimed responsibility; they are involved, according to their statements, in the fighting in Syria, but they also had a presence in the region before the uprising in Syria and are linked to al-Qa`ida. And al-Qa`ida has been associated with one section of the Syrian opposition that has become increasingly influential and powerful, controlling parts of northern Syria. So, many people see this as yet another spillover of the war in Syria.

It’s possible that this group has cells or even allies inside Lebanon that might have facilitated this activity. There are many in the Sunni community in Lebanon who are generally sympathetic to the Syrian uprising, and some of them are more radical and have links to the jihadi factions of the Syrian rebellion. The Sunni community in general is reacting quite strongly to Hezbollah’s open engagement in Syria, where it is fighting alongside the Syrian regime.

What is the immediate concern for Lebanon?

After, of course, the grief over the people who have been killed and injured, the concern is about possible retaliation. The previous bomb that went off in the southern suburbs was followed fairly quickly by large bombs in Tripoli in a possible tit for tat action.  Lebanon is part of a proxy war that is engulfing the entire Levant; and the alliances that back the rival factions in Lebanon are the same that back opposing groups in Syria and Iraq.   So the immediate concern would be another car bomb.

And the long-term concern for Lebanon?

As a result of the polarization in the country that has been heightened by the fighting in Syria, the Lebanese political system has become paralyzed. It was unable to hold parliamentary elections, was not able to form a new government, and will possibly be unable to elect a new president when the current president’s term ends in the spring. This paralysis of the political system is decreasing the ability of the state to absorb or manage tensions and leaves the country vulnerable to a more serious breakdown of order.

A pattern could evolve, as it did in Iraq in 2005-2006 and onward, in which car bombs and suicide missions were one of the main instruments of sectarian and proxy conflict. It hasn't reached that level in Lebanon—these bombings are still somewhat few and far between—but a great concern is that if this becomes a more frequent pattern, then Lebanon would not be able to maintain its fragile calm. Such a pattern would also have a major impact on the economy and people’s livelihoods. I don’t think the major players have an interest in the situation getting to this point, but there are enough radical groups that are out of control that could raise the risk.

How long Lebanon can hold on is not altogether clear, particularly given the vast number of Syrian refugees registered in the country, which is approaching three quarters of a million, with another five to six hundred thousand unregistered Syrians in the country as well. They bring with them their own security concerns. If any of these refugees become armed and militarized, then that would be a game changer.

How does Hezbollah relate to this possible breakdown?

There are some in the Syrian opposition and backers of the Syrian opposition that would like to hit Hezbollah at home in order to weaken it in Syria. This is not a majoritarian position among the opposition’s backers, however. Generally the Gulf countries, Turkey, and all of the main players have been clear about wanting to maintain stability in Lebanon, but there are some radical elements who think otherwise. Hezbollah knows that it might be goaded in this direction, but Iran and the Assad regime would want Hezbollah to resist that and avoid the risk of being dragged into open fighting in Lebanon. Also, Hezbollah is comfortable with the status quo in Lebanon. It helped engineer the current paralysis, and it wants Lebanon to remain calm so that it has a free hand to fight in Syria.

An Iranian Foreign Ministry spokeswoman accused Israel of the bombings. What is the significance there?

Iran and Hezbollah often accuse Israel in such situations. They don’t want to accuse Sunni radicals of doing it, even if it might be obvious that they did. Iran has had the ambition of leading the whole Muslim world, which is 80 percent Sunni. Hezbollah, after the 2006 war, was extremely popular, with Nasrallah, Hezbollah’s leader, cited as the most popular person in the Arab world. Now they have lost almost all of that popularity, but they have always been careful to downplay conflicts with the Sunni world. So, they automatically try to deflect tension via Israel.

How should the international community respond to such an event?

This bombing in Lebanon is not unique; it is part of a pattern of sectarian and proxy warfare that has paralyzed and devastated Iraq, Syria, and Lebanon, and that threatens security in Bahrain and has implications for Yemen. The policy implication is that it is important for the international community not to respond to this bombing as a singular event. It reminds us of the need to address the bigger issues, which for the regional players as well as the global players, including the United States, Russia, and others, involves moving forward with the Geneva II conference on Syria and offering support to Syria’s neighbors, especially Lebanon, progress on the P5+1 talks with Iran, and actions to de-escalate the sectarian conflict that is tearing Syria apart and continues to destabilize Iraq and Lebanon.