Bulgaria in the Black Sea: Defending against Russian hybrid warfare 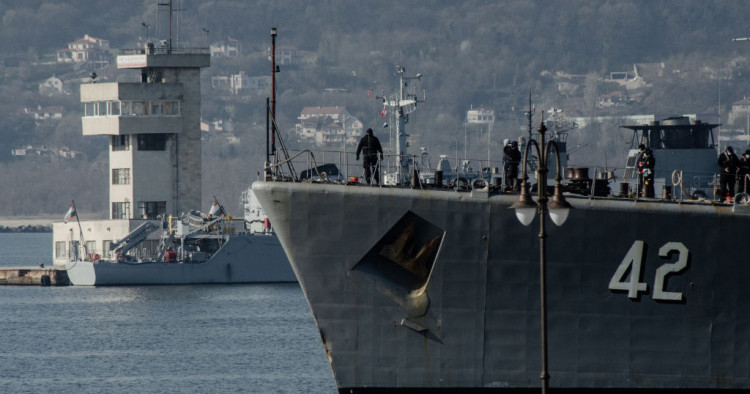 As a NATO and EU member, Bulgaria has consistently been a target of the Kremlin’s hybrid warfare. Moscow is pursuing a calculated and well-planned policy aimed at influencing domestic politics in Bulgaria, with a view of preventing the country from becoming a robust NATO regional security provider. This is especially important for the build-up of the Alliance’s presence in the Black Sea.

Bulgaria’s defense system has long been subverted by Russia. Just last month, Bulgarian prosecutors announced charges of six Bulgarians on suspicion of spying for Russia. Five of the accused are senior or former defense officials. This is the latest example of Moscow’s persistent efforts to use Bulgaria as a channel for obtaining classified NATO information.

Of particular interest to the Russian intelligence services are rearmament projects in Bulgaria, including the purchase of U.S. F-16 Block 70 fighters and the recently inaugurated NATO Maritime Coordination Center in Varna. Eight Russian diplomats have been expelled from Bulgaria since late 2019. But espionage is only the tip of the iceberg, with strong efforts to influence political decisions playing out below the surface.

Bulgaria’s track record in building up its capacity to counter hybrid threats, although largely positive, can and should be improved.

As NATO outlines, it is the primary responsibility of the targeted nation to respond to hybrid attacks. Bulgaria has already undertaken initial steps to develop this capacity. In 2018, Sofia updated its National Security Strategy of 2011 to include hybrid threats and to deliver a realistic security environment assessment, in particular regarding Black Sea challenges. The government also updated its National Defense Strategy in 2016 with the purpose of equipping its defense organization to meet hybrid warfare challenges.

In early 2021, following a two-year Strategic Defense Review, Bulgaria adopted a new Armed Forces’ Development Program 2032, which focuses on capability building to strengthen defense potential in the context of the NATO Article 5 collective defense. The program also recognizes hybrid threats. Furthermore, under this document, it is envisaged the Ministry of Defense will develop its capacity to counter hybrid threats, serving as an integral part of the national security system.

These steps have been important and timely. But they fall short given the complexity of evolving security challenges and, above all, Russia’s revanchist agenda in Eastern Europe. Meanwhile, challenges from an increasingly assertive China – such as the use of economic activities to further the Beijing’s foreign policy priorities, including debt dependencies – must also be considered.

While Bulgaria’s strategic documents do acknowledge hybrid threats, they do not offer sufficient detail beyond that. Importantly, they do not outline ways and means to counter such threats. This gap must be addressed to ensure the conceptual framework can realistically deal with hybrid warfare.

It is high time Bulgaria developed a strategic document dedicated to hybrid threats of any form and from any source. Sofia must write and adopt a national strategy for countering hybrid threats. At the same time, greater exchange of knowledge and experience with allies and partners is needed. This is one reason why Bulgaria should urgently join the European Centre of Excellence for Countering Hybrid Threats, which currently supports its 28 participants in building their capabilities.

In strengthening its resilience and capabilities toward hybrid threats, Bulgaria would become a stronger NATO ally in the Black Sea. Doing so would also fast-track the modernization of its armed forces and improve their capabilities, readiness, and interoperability.

In 2019, with the purchase of eight U.S.-made F-16 fighter jets, Bulgaria made its biggest military acquisition since the end of Communism. The new aircraft is yet to be delivered and substantial U.S. support is needed to make the new Bulgarian F-16 fleet operating to NATO standards. Given this reality, Bulgaria is maintaining its existing fleet of 15 Soviet-made MiG-29s. Alarmingly, Bulgaria remains dependent on Russia for the maintenance and repair of its obsolescent MiG-29s fighters, which also lack NATO interoperability. Bulgaria’s experience with the Russian manufacturer RSK MiG has been fraught with problems, with the company delaying repairs. Although Bulgaria is reported to have activated a penalty clause, Russia could not complete the contract implementation in time and has proved unreliable. Russian companies should immediately be prevented from any repair or maintenance work of Soviet equipment still in operation.

In 2016, in an effort to enhance its air policing capacity, Bulgaria introduced legislation that would allow for joint missions with NATO Allies. Since 2014, Romania has regularly benefited from joint NATO air policing. In contrast, Bulgaria has conducted just three such missions: two with the U.S. in 2016 and 2020 and one with Italy in 2017. This is undoubtedly not enough to adequately strengthen Bulgaria’s air policing, especially given Russian attempts to destabilize the country. There is so much more potential for future joint missions as part of NATO’s enhanced air policing measures in the Black Sea.

On Mar. 18, 2021 Bulgaria and Romania signed a Protocol amending a 2011 Agreement between the two governments on cross-border air policing. This was an important and overdue step to strengthen Allied air policing over their territories. Once the agreement is ratified by both parliaments, NATO fighter aircraft deployed either in Bulgaria or in Romania to support their respective air policing operations will be allowed to conduct cross-border missions. This section of Allied airspace will now be much better protected from Russian violations.

In November 2020, Bulgaria finally signed a contract with Lürssen Group to build two multipurpose modular patrol vessels that would participate in a broad range of NATO and EU-led operations. The implementation of this project will help the Bulgarian Navy acquire modern capabilities for surface warfare, submarine warfare, and air warfare.

However, a joint NATO maritime capability in the region is still badly needed and the potential for building naval capability under the Alliance is yet to be fully exploited. In 2016, former Bulgarian Prime Minister Boiko Borisov said the country would not join a proposed NATO fleet meant to counter Russian influence in the Black Sea, a day after Moscow warned against any such build-up. His awkward reaction was due allegedly to Russian pressure and unfortunately for all NATO regional Allies, resulted in abandoning a promising and much needed initiative.

Nonetheless, the recently established center in Varna is an encouraging achievement in the build-up of a stronger NATO presence. Through this structure, Bulgaria will provide a maritime coordination function to support NATO's tailored Forward presence. The Center will also support maritime domain awareness.

With these steps and initiatives, Bulgaria is on the right path to become more resilient to Russian hybrid activity and a more militarily capable NATO member. But significant and sustained defense policy efforts are needed to develop the right defense capabilities to meet challenges of tomorrow.

Bulgaria is still a largely untapped reserve of opportunities regarding the build-up of the NATO deterrence and defense potential in the region. To what extent these opportunities can be seized upon depends on continued and consistent political support from Bulgaria’s ruling parties, as well as on NATO’s (and primarily America’s) commitment to strengthening the Alliance's Black Sea flank.

Mihail Naydenov is a defense and security expert currently working for the Bulgarian Ministry of Defense. The views expressed here are his own.