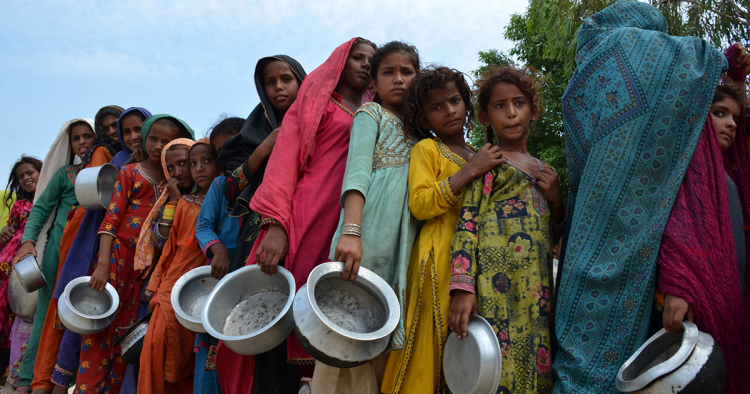 Pakistani Prime Minister Shehbaz Sharif recently warned that his country needs “an infinite amount of funding” to support flood relief efforts. Torrential rains and heavy flooding have killed more than 1,550 people and displaced millions. Compounding the challenge are Pakistan’s intensifying food and health crises, as flood-borne diseases surge and nearly two-thirds of the country’s food basket has been destroyed.

A dearth of healthcare access in hard-hit southern provinces threatens to expose millions of malnourished children and women to infectious diseases, with fears of a wider spread. An estimated 16 million children have already been impacted by the floods and millions remain in need of lifesaving support, according to figures from the United Nations International Children’s Emergency Fund (UNICEF). Delivering that support is an enormous task. Cases of malaria, dengue, and skin diseases continue to climb, and water borne diseases have pushed daily patient numbers to as high as 90,000 in Sindh. The situation in neighboring provinces offers little comfort: Make-shift health facilities are increasingly common, as dwindling finances and limited expertise hamper relief efforts in flood-ravaged areas.

As Pakistan braces for more floods, it is unlikely that a fragile healthcare system can keep apace for long. On the financial side, just over 1% of Pakistan’s total GDP goes toward public health expenditure, and even support for major relief camps is reliant on international assistance. Depleting currency reserves and record-setting inflation have put enormous pressure on long-term spending, which suggests there may be delays in efforts to rebuild lost infrastructure.

Pakistan’s growing dependence on make-shift facilities presents another problem: It creates an urgent demand for climate-safe infrastructure that could take years to build. In Sindh, Pakistan’s hardest-hit province, authorities fear that the damage to healthcare facilities has reached a point where many are unable to “offer any services” to flood victims. These constraints arrive at a time when malaria cases are fast rising, and a deadly surge in dengue fever raises alarms in other provinces. Over half a million pregnant women also require maternal health services in flood-ravaged areas, putting more pressure on Islamabad to scale emergency response efforts, and prevent vulnerable populations from sliding into acute hunger.

Extreme floods have wiped out over 800,000 hectares of farmland, and damaged about 80-90% of crops. These include crops that are critical to Pakistan’s food supply chain. Key export items, including rice, wheat, and cotton, also risk future shortages as the scale of damage spreads to key agricultural belts. That includes Pakistan’s southernmost Sindh Province, where an estimated 90% of crops have been ruined. Sindh is responsible for producing half of the country’s food.

The resulting constraints on Pakistan’s agricultural sector are enough to lift double-digit inflation to new highs if supply shortages stretch long term and future floods exacerbate damage. There is also growing likelihood that the government will increase its dependence on agriculture-related imports to plug near-term shortfalls.

Early signs include Pakistan’s engagement with the Asian Development Bank, hoping to leverage flexible financing of food imports to address domestic demand. But Islamabad’s shaky foreign reserves make it difficult to scale imports and continue food sourcing long term. That puts the government in a tight spot when the threat of acute hunger is fast intensifying.

The International Committee of the Red Cross has already warned of a substantial rise in acute hunger going forward, since at least 43% of Pakistan was already food insecure before the floods hit. Heavy rain damage to key areas of agricultural production has further weakened the prospect of a productive rice and wheat harvest this fall, an essential factor in bolstering nationwide supplies. Much of Sindh and Balochistan’s flood water refuses to recede quickly, putting pressure on resource-rich Punjab to step up production, and soften the blow of any long-term price shocks.

As Pakistan stares at the specter of increased starvation, a change in course remains elusive. Extreme floods have pushed legions of children to the verge of hunger, and increased their exposure to contaminated drinking water. The possibility of more floods amplifies fears of future displacement and relocation. Millions of flood-affected people are still confined to open skies, with limited means to compensate for lost agricultural and farming income. That income has played a critical role in sustaining community livelihoods for years, and helped others navigate absolute poverty. As millions become reliant on humanitarian aid for survival, regaining livelihoods will be a monumental challenge.

Economic recovery hopes are also bleak, thanks to weakened growth and potential borrowing in the future. Some 21 million acres of crops are still underwater, compounding food supply logistics at a time when extreme weather events are likely to become more frequent in Pakistan.

Islamabad’s ruling coalition has limited options at its disposal. Billions in flood damages could prompt a cut in projected GDP growth, making it critical to leverage international climate financing to support relief operations in hunger hotspots. On the domestic front, the government is under intense pressure to deliver long-due economic relief. Promised service delivery reforms are yet to materialize in full, while drastic upticks in food and energy prices add to public discontent. Rapid food imports from neighboring countries also face headwinds: The rupee’s sharp devaluation has complicated trade arrangements with Afghanistan and Iran, and risks intensifying an acute shortage of tomatoes, onions, and potatoes.

To be clear, despite long-running frictions between the Pakistan Tehreek-i-Insaf and the ruling coalition, top leaders continue to campaign for urgent flood donations and back international appeals.

But restoring nearly two-thirds of the country’s food basket will prove much harder.

Pakistan should prioritize early evacuation efforts in high-risk districts where the threat of rising water levels is most pronounced. Lack of early evacuation contributed to the post-flood shelter crisis that has left millions homeless. In an encouraging sign, local authorities have begun work on early rehabilitation in densely populated areas, and continue to facilitate the return of flood-hit populations once water levels drop. It is imperative for Islamabad to work with the United Nations on a post-disaster reconstruction plan, with a specific focus on ending illegal construction on Pakistan’s riverbeds.

The survival of key crops in Punjab should form the core of the government’s food sourcing in the near term. Priority supplies can be dispatched to make-shift camps where hunger risks are most pronounced, with enough from fall harvest to limit possibilities of a major price spike.

Provincial governments should also ensure that each rebuilt health installation is registered as a “panel facility” in rural districts. Panel facilities constitute a predefined list of hospitals and serve as the first point of treatment for one or several districts. This gives flood victims more than one access point for treatment, and prevents make-shift camps from taking on an excess treatment burden in the future. Early evidence from Pakistan’s “Sehat Sahulat” health insurance reforms in the north confirms a similar logic at play: Empaneled facilities played a vital role in extending healthcare access to scores of underdeveloped districts.

But given the sheer gravity of Pakistan’s health and food crises, one thing is clear: Damage control alone will not suffice.

Hannan Hussain is an international affairs commentator, author, and recipient of the Fulbright Award in Public Policy at the University of Maryland. You can follow him on Twitter @hannanhussain7. The opinions expressed in this piece are his own.