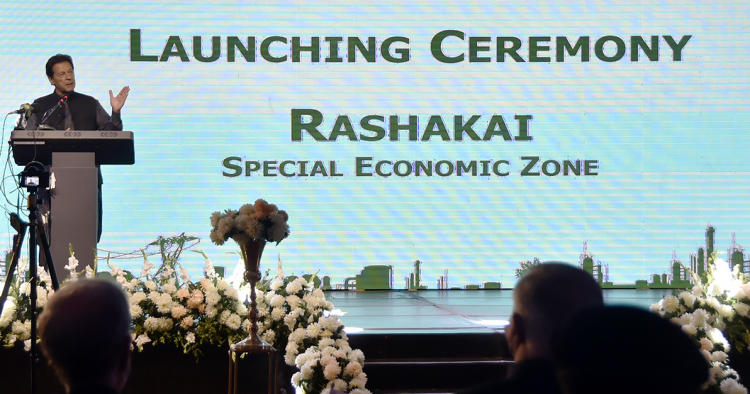 In September, China and Pakistan convened the tenth session of their joint coordination committee (JCC) that oversees the China-Pakistan Economic Corridor (CPEC) — the largest of the Belt and Road Initiative (BRI) corridors.

The long-anticipated meeting — delayed several times for well over a year due to the COVID pandemic, an impasse over some major projects, and terrorist violence — ultimately yielded no major breakthroughs. Instead, Beijing is digging in its heels, striking a hard line with Islamabad over new loan terms, mounting arrears, and security. It also remains frustrated with the state of governance and policymaking in Pakistan.

As a result, the momentum of CPEC appears to be losing steam once again. But for Pakistan, slower may actually be better. A more methodical pace — compared to the irrational exuberance of CPEC’s initial 2014-18 period — gives Pakistan an opportunity to set realistic timelines, negotiate better contracts, and focus on projects that put it on the path toward sustainable, balanced economic growth.

The tenth JCC meeting was originally planned for mid-2020, with the expectation that it would coincide with a visit of Chinese President Xi Jinping to Pakistan and the announcement of an agreement on the CPEC’s biggest project in value: the revamping of Pakistan’s main railway line, the ML-1.

Last year, it appeared that the two countries were nearing a deal on the ML-1. That is, at least, how Pakistani officials presented it. However, today, there remains a wide gap between China and Pakistan on the terms for the mega-project, which stretches from Karachi to Peshawar. Beijing clings to a project cost estimate that is at least $1 billion higher than that of Islamabad. And it is insistent on non-concessionary financing in RMB, which would help advance the currency’s internationalization.

Beijing also remains frustrated with mounting arrears owed to Chinese independent power producers (IPPs), which total around $1.5 billion. It not only wants these arrears to be cleared but is also once again asking Islamabad to set up a revolving fund to guarantee timely payment of dues to IPPs. And it is refusing to renegotiate costly power purchasing agreements.

The close strategic relationship between China and Pakistan has not translated into major upfront contractual concessions for Islamabad. In fact, China’s treatment of Pakistan in commercial interactions is strikingly similar to its behavior elsewhere. Beijing drives a hard bargain. An AidData study of Chinese debt contracts with foreign governments concludes that “Chinese lenders seek advantage over other creditors, using collateral arrangements such as lender-controlled revenue accounts and promises to keep the debt out of collective restructuring (‘no Paris Club’ clauses).”

Bigger is not always better

Pakistan stands out as the largest single-country venue for BRI projects, totaling over $27 billion in value, according to a new report by AidData. Over 5,000 MW in installed capacity has been added to Pakistan’s electricity grid through CPEC, with another 3,500 MW under implementation. And even as the ML-1 stalls, other projects are near completion. These include Gwadar’s East Bay Expressway and the Matiari-Lahore high-voltage transmission line, which will substantially improve Pakistan’s grid stability and transmission capacity.

The completion of these projects is largely due to Pakistan’s previous government, which fast-tracked the approval of CPEC projects so that many would be operational before the 2018 elections. This momentum generated under a sclerotic system such as Pakistan’s was appreciable. But the electorally driven approach was also irresponsible — rapidly widening Pakistan’s current account deficit and forcing the current ruling coalition, led by the Pakistan Tehreek-e Insaf (PTI) party, to return to the International Monetary Fund.

Swinging for the fences

While PTI was dealt a bad hand, the quality of governance under its tenure leaves much to be desired. Its economic policymaking team has been reconfigured numerous times. And inconsistent regulatory and tax policies continue to inhibit Chinese investment. PTI and Pakistan’s broader political class still treat CPEC as a piggy bank for pet projects.

For example, Pakistan’s maritime affairs minister, Ali Zaidi, announced after the recent JCC meeting an agreement on a $3.5 billion project — the Karachi Comprehensive Coastal Development Zone (KCCDZ) — that would develop reclaimed land off the Karachi coast and provide much-needed connectivity in the port area. Prime Minister Imran Khan touted the project as a “game changer” and Zaidi said with great confidence that given that the “Chinese work so fast,” it would “not take more than five or six years to complete the project.”

But Pakistani columnist Khurram Hussain subsequently revealed that what was signed was merely a memorandum of understanding to “seek a commitment” by a Chinese state-owned enterprise to conduct feasibility studies on the project.

In principle, developing the area around the Karachi port — Pakistan’s largest — is a good idea. In fact, it should have taken precedence over Gwadar in the initial CPEC plan. But no Pakistani official has yet explained what will actually be constructed on the reclaimed land.

At its core, the KCCDZ appears to be the latest attempt to construct the Harbor Crossing Bridge, which was to have provided dedicated connectivity from the Karachi Port to Pakistan’s national highway network, bypassing the congested city center. For over a decade, Pakistan has failed to secure financing for the project, which was estimated to cost over $1 billion.

Through the KCCDZ, Pakistan may not have to take on debt to construct the bridge. It could instead provide the state-owned China Road and Bridge Corporation (CRBC) with the rights to reclaim, lease, and develop land for commercial purposes in exchange for constructing the bridge and associated infrastructure.

Conceptually, the KCCDZ may be similar to Port City Colombo project, also being developed by a Chinese state-owned enterprise. Like the Port City Colombo, the KCCDZ could trigger debate over sovereignty issues. And then there is the not-so-insignificant problem of resettling around 500,000 residents of a slum, many of whom are stateless.

Natural selection and the evolution of CPEC

Rent-seeking federal and provincial government officials in cash-strapped Pakistan will continue to lobby and compete with one another for the addition of pet projects to the CPEC portfolio. Much energy will be wasted, but in the end, few of these projects are likely to see the light of day given China’s growing risk aversion and Pakistan’s macroeconomic challenges. That may be a good thing as both countries will be forced to anchor the program to fiscal and economic realities.

As CPEC evolves, natural selection may decide the winners and losers. And here we may see federalism work to Pakistan’s benefit. Each Pakistani province has a CPEC-linked special economic zone for which it is seeking Chinese investment. Inter-provincial competition may be forcing them to improve their game.

Industrial zones in Pakistan have tended to devolve into speculative real estate plays, with “investors” flipping plots of land for quick profits instead of putting capital into manufacturing. Learning from the mistakes of the past, the Rashakai Special Economic Zone, located in the Khyber Pakhtunkhwa province, is adopting a more careful strategy. The provincial economic zones authority, along with other governmental bodies, assesses applications every quarter based on firm criteria, including the ability to generate exports, substitute imports, process local natural resources, or generate employment. A Chinese steel company is among its early investors. Utility connections are slated to be completed in the coming months, but supply could be an issue given the impending natural gas crisis this winter.

Originally conceived as three consecutive five-year phases, CPEC is now in an indefinite stage. The coming years will see less ribbon-cutting, fewer new debt-driven projects, and a greater emphasis on outputs. CPEC, of course, cannot escape Pakistan’s broader macroeconomic woes, inconsistent policymaking, and the structural problems afflicting its electric power and energy sectors. It has also exacerbated many of these challenges.

But CPEC’s future trajectory may also be increasingly determined by the entrepreneurship of individual ministries and provincial leaderships. Indeed, despite the high-level coordination, in practice, CPEC may become more fragmented and its results uneven. While CPEC may never develop into a bilateral Sino-Pak economic corridor, it can still be leveraged as a platform to advance Pakistan’s broader economic objectives — increasing foreign direct investment, expanding productivity and improving resilience in agriculture, and increasing and diversifying Pakistan’s exports.