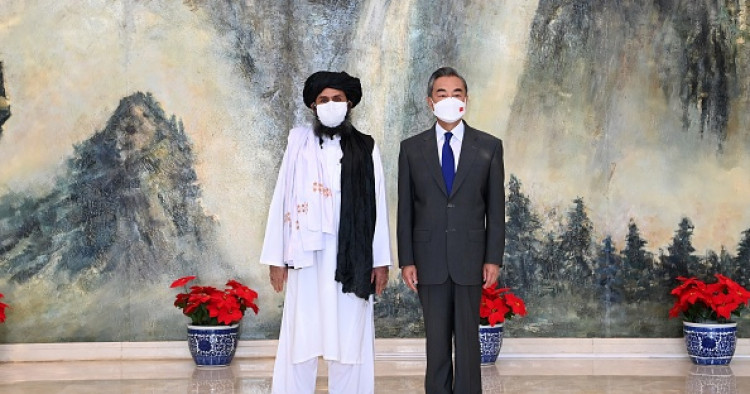 During a regular press conference held just hours after Taliban forces entered Kabul, foreign ministry spokeswoman Hua Chunying stated that China stands “ready to continue to develop good-neighborliness and friendly cooperation with Afghanistan and play a constructive role in Afghanistan’s peace and reconstruction.”[1] But is China anxious to fill the vacuum left by the US withdrawal, intent on redrawing Asia’s geopolitical map, and capable of coaxing the Taliban onto a path of peaceful coexistence?

Since the fall of Kabul on August 15, the US and its Western partners have struggled to strike a balance between the desire to use foreign aid as leverage over the Taliban and the need to avert a looming humanitarian disaster. Not so with China, which from the outset has followed its customary practice of being prepared to deal with any government, irrespective of composition and whatever the route taken to attain power.

Following the Taliban takeover, the Biden administration froze nearly $9.5 billion in Afghan government reserves held in US bank accounts.[2] The European Union, Britain, and Germany all suspended their development aid programs.[3] The International Monetary Fund (IMF) blocked the distribution of emergency currency reserves,[4] while the World Bank halted funding for dozens of projects.[5] However, barely a month later, the US and other donor countries responded to a United Nations emergency appeal by pledging over $1 billion to address the dire humanitarian situation in the country.[6]

While the West pondered and deliberated over aid, Beijing moved quickly to stake out an independent position, calling upon the international community to furnish assistance without conditions, unfreeze assets, and “remove obstacles to reconstruction.”[7] China, along with Pakistan, was also one of the first countries to offer foreign aid since the Taliban took power, pledging $31 million worth of grain, winter supplies, vaccines, and medicine.[8]

Yet, China’s response to the Taliban’s takeover, while friendly, has been circumspect. Beijing has not yet officially recognized and thereby extended legitimacy to the Taliban as Afghanistan’s new leadership, though that step seems inevitable. China’s cautious overture to the Taliban perhaps signifies that Beijing does not necessarily view recent developments in Afghanistan as a geostrategic and economic windfall. Instead, Beijing’s approach likely reflects the calculation that diplomatic and economic incentives might induce the Taliban to adopt positions that align closely with Chinese interests.

Filling the Vacuum? The Danger on China’s Doorstep

For China, engaging the Taliban is more a matter of managing threats than seizing opportunities. Beijing’s perennial concern has been, and remains, the potential for Afghanistan to become a sanctuary for militant groups targeting Chinese territory, economic assets in the surrounding region, and/or diplomats and workers.

The unusually well-publicized meeting in Tianjin in July between Foreign Minister Wang Yi and then-head of the Taliban Political Commission, Abdul Ghani Baradar, reportedly focused on the issue of Taliban ties with Uighur groups. According to a statement issued by the Chinese Foreign Ministry, Wang obtained assurances the Taliban would “never allow any force to use the Afghan territory to engage in acts detrimental to China.”[9]

In recent years, China has taken great pains to seal the 50-mile border with Afghanistan, reducing the likelihood of infiltration into Xinjiang. However, the East Turkestan Islamic Movement (ETIM) has emerged as a capable actor and has established a presence in Afghanistan.[10] A UN report issued in June found that hundreds of ETIM and ISIS-K fighters remain active in Badakhshan Province.[11] An attack on Chinese territory originating from Afghanistan is therefore not implausible. During a July press conference, Liu Yunfeng, the director of the Counter-Terrorism Bureau of the Ministry of Public Security acknowledged the ongoing terrorist threat from neighboring countries — though without naming Afghanistan or Pakistan — emphasized the need for China to remain vigilant.[12]

The fact that China’s economic involvement in Pakistan and Central Asia has greatly expanded over the past decade has increased its exposure to multiple threats, including the potential spillover effects from Afghanistan in the form of mass displacement, political violence, and cross-border drug trafficking. The threat of violence against Chinese nationals living and working in the region is real. In July, an attack on a bus carrying Chinese engineers in Pakistan, nine of whom were killed, has since been attributed by Chinese officials to assailants operating from Afghanistan.[13] This incident was just the latest in a string of attacks on Chinese nationals in Pakistan.[14]

Chinese officials did not miss the opportunity to make hay out of the United States’ chaotic withdrawal from Afghanistan. Foreign Ministry spokesman Zhao Lijian repeatedly compared it to the fall of Saigon.[15] His colleague, Hua Chunying, called the US “destructive,” adding that “wherever the US sets foot … we see turbulence, division, broken families, deaths and other scars in the mess it has left.”[16] Further advancing the narrative of American decline, the Global Times carried an editorial urging Taiwan to stop “bonding themselves to the anti-Chinese mainland chariot of the US,” arguing that the United States would not bother waging a costly war with China over Taiwan.[17]

However, all the gloating over the departure of US and NATO forces likely masks a deep anxiety about the security implications of the Taliban’s resurgence and the reestablishment of its rule over Afghanistan. It is far from clear whether the fledgling and internally divided Taliban administration will be able, much less willing to rein in Islamist movements hostile to its neighbors, including China. It is also unclear whether the compulsions and conduct of Pakistan, China’s “all weather ally” and the Taliban’s chief patron, will help ameliorate or exacerbate Afghanistan’s fragility.

Beijing has long held to the conviction that development is the key to stability and security. This conviction has underpinned its efforts to strengthen economic ties with Afghanistan for the better part of two decades.[18] To date, however, China has remained a relatively minor player in Afghanistan’s economy. Notwithstanding Beijing’s pragmatic relationship with the Taliban, the allure of Afghanistan’s vast undeveloped natural resources, and the country’s potential value as a passageway for commerce and transit, China’s role is not about to change dramatically anytime soon.

Afghanistan’s abundant untapped mineral wealth beckons. And it has been well over a decade since several major Chinese companies answered the call. In 2007, for example, the China Metallurgical Group Corporation and Jiangxi Copper Ltd., were awarded a joint contract to extract copper from the huge deposits at Mes Aynak, 30 miles southeast of Kabul.[19] Fourteen years later, however, work at the site has yet to begin. In 2011, China National Petroleum Corporation (CNPC) won the right to develop an oil field in Amu Darya. That deal did not pan out either. Although CNPC started producing oil there in 2012, it suspended operations the following year and has reportedly exited the project.[20] Furthermore, in both instances, the implementation of the projects was to have been supported by Chinese investments in related infrastructure — investments that never materialized.

In May 2016, China and Afghanistan signed a memorandum of understanding (MoU) pledging to jointly promote cooperation under the Belt and Road Initiative (BRI). But a year elapsed before Afghanistan was included in China’s BRI plans, and then as an extension of China-Pakistan Economic Corridor (CPEC).[21] The Ghani administration made involvement with the BRI a priority,[22] and Chinese officials repeatedly expressed interest in expanding CPEC into Afghanistan.[23] However, no significant new Chinese investment was forthcoming.[24] Most of the road-building and other infrastructure projects involving Chinese companies have been supported through international institutional financing. Studies on joint development of various railway networks were undertaken, though none of the projects contemplated or planned have been completed.[25]

As recently as July 27, China’s foreign minister Wang Yi held a four-way video conference with his counterparts from Afghanistan, Pakistan, and Nepal to discuss the expansion of their pandemic cooperation during which he proposed the establishment of a multimodal trans-Himalayan “green corridor.”[26] Nevertheless, it is difficult to imagine this idea gaining traction in the short term given the political instability in Afghanistan and the ongoing presence there of militant Islamist organizations pursuing transnational objectives.

The prospects for extending CPEC into Afghanistan seem dim for three additional reasons. First, there is likely to be pushback from Islamabad, which would much prefer that China focus its attention and resources on Pakistan. Second, there is some concern that Islamabad may default on certain CPEC-related debts, raising questions as to whether Pakistan’s contribution and Chinese-related loans will suffice to complete the projects already underway, much less undertake efforts to integrate Afghanistan into it.[27] Third, the recent trend with respect to China’s Belt and Road toward smaller projects and less lending[28] makes it even less likely that Chinese policy banks and/or firms would take on the challenge and assume the risks of seeking to integrate Afghanistan into the BRI and maintain it as a viable corridor well beyond the initial project implementation period.

One can envision several possible scenarios for Afghanistan’s immediate future. But China “filling the vacuum” and quickly emerging as the predominant external actor is one that seems unlikely not only because other regional stakeholders would presumably seek to thwart that outcome but because Beijing may not be keen to pursue it. Chinese involvement in Afghanistan is primarily animated by security concerns. Paradoxically, it is these very concerns that both impel China to deepen its involvement in Afghanistan and inhibit it doing so. That is why, for the foreseeable future, China may be more inclined to assign a higher priority to the containment of perceived security threats originating from Afghanistan than to embark on major development projects there.

[13] Foreign Ministry of the People’s Republic of China, “foreign ministry spokesperson hua chunying answered questions on the pakistani government’s announcement of the progress of the investigation into the dasu terrorist attack,” August 12, 2021, https://www.fmprc.gov.cn/web/fyrbt_673021/t1899102.shtml.

[26] Foreign Ministry of the People’s Republic of China, “Wang Yi on the Five-point Important Consensus Reached at the Video Conference of Foreign Ministers of China, Afghanistan, Pakistan and Nepal on COVID-19,” July 27, 2021,  https://www.fmprc.gov.cn/mfa_eng/zxxx_662805/t1801954.shtml.