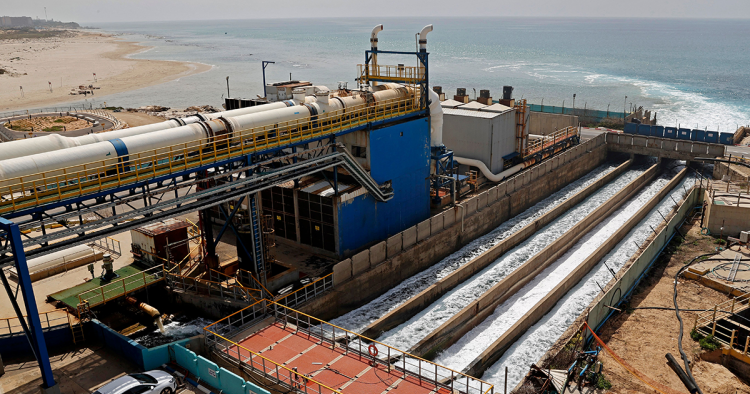 Desalination is increasingly accepted as an essential component of any arid region’s water supply portfolio. In the Mediterranean Basin, a region deemed particularly sensitive to climate change, water-starved countries from Morocco to Israel are not only expanding their reliance on desalination, they are doing so precisely because they are increasingly susceptible to the effects of climate change on global atmospheric and marine circulation. These cycles are driven in large part by temperature and density gradients in the atmosphere and oceans. For those states with the political will and the means to make it happen, the short-term promise afforded by desalination is seen as outweighing the high power costs and the long-term risks associated with brine disposal. Climate change has leant an immediacy to these considerations. With desalination now within reach as a more viable, long-term water augmentation strategy, increased attention has been given to the detrimental effects of brine disposal on the local environment (marine or terrestrial). More immediately obvious effects such as these, however, may belie greater factors at work at the nexus of salinity and climate change.

Stratification due to salinity is readily observable everywhere in the ocean, but there are some regions where salinity may actually enhance mixing. The Eastern Mediterranean, where warmer, saltier water overlies colder, less saline layers, is one such location. Saline water near the surface sinks, transferring heat to the surrounding cooler water, which then rises, mixing the water column. While the direct impacts from anthropogenic brine discharge in the Eastern Mediterranean are still considered “modest” and heavily localized, increased salinification of deep water is clearly already happening.

There is ample evidence to suggest that density differences due to temperature, and not salinity, may be a significant driver of mixing. Nowhere is this more evident than in the oceans, where differences in temperature drive circulation on hemispheric and global scales over periods of several months to years. At the global level, “deep water generation” in polar regions has been shown to play a crucial part in the cycling of heat, salt, dissolved oxygen, and nutrients in the ocean. The concept is straightforward: Warm water transported along the surface of the ocean toward polar regions loses heat to a colder, drier atmosphere, cools (therefore becoming denser), sinks, and returns to warmer regions as deep water.

At a regional scale, such as the Mediterranean, the laws controlling these processes do not change, but may be enhanced or impeded by other factors. Mediterranean deep water is generated in those reaches of the basin with exposure to colder winter temperatures, namely: the North Adriatic and the North Aegean. Warmer surface waters may not only lose heat to a cooler atmosphere, their salinity may also be increased through evaporation. In a clearly stratified, closed basin such as the Mediterranean, where the salinity profile changes profoundly from west to east, the nature of deep water generated during the winter may therefore depend upon which of these northern reaches happens to be colder and more active in this regard.

With climate change resulting in warmer winters in the North Adriatic and North Aegean, however, it is not difficult to imagine a long-term reduction in deep water generation in the Mediterranean. If it is slowed or paused altogether, what are the implications for nutrient cycling and biodiversity? Significant changes in circulation are bound to affect these key components of the marine environment. Apart from upending marine ecosystems in the Eastern Mediterranean in as-yet unquantified ways, there would undoubtedly be an economic impact as well, felt most acutely by small-scale fishermen, who account for most of the region’s fishing operations. Climate change is a global burden, driven in large measure by the behavior of a handful of key actors; if the brunt of these symptoms are borne disproportionately by small businesses and subsistence stakeholders, who should ultimately be responsible for the resulting environmental damage and loss of livelihood?

Also, how might changes such as these drive the long-term outlook and prospects for desalination in the Mediterranean and related concerns in the future? Does it make desalination less viable of an option as a regional water source? The environmental and economic impact of significant, widespread anthropogenic brine discharge may take decades to manifest, but with the historically economic obstacles to desalinization as a viable strategy falling away in recent years, a newfound interest in desalination across the basin is clear. Trends such as these should provide an opportunity for a broader conversation about:

Despite the good work of the respective national authorities and various U.N.-sponsored groups, data gaps such as these call for a debate over the potential utility of setting up regional bodies to study or address these issues. At the very least, they merit attention at the upcoming United Nations Climate Change Conference (27th Conference of the Parties, COP27) this November.

Orestes Morfín is a senior planning analyst with the Central Arizona Water Conservation District and a non-resident scholar with MEI’s Climate and Water Program.