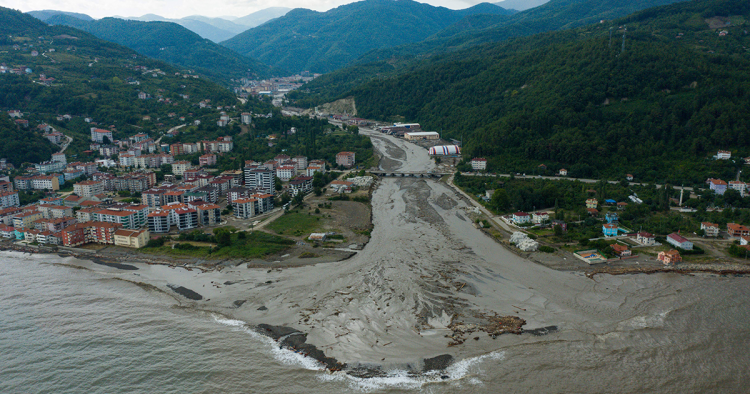 Turkey, like all other countries, is facing the harsh reality of climate change. Last year, it experienced one of the hottest summers on record. Blistering heat waves led to widespread wildfires in the country’s southwest, affecting five times more land than normal during the summer. Though Turkey usually has large water surpluses, some areas experienced shortages due to extreme drought. Others suffered heavy flooding, leaving scores dead.

Predicted changes in Turkey’s climate and their consequences

In its 2021 report, the U.N. Intergovernmental Panel on Climate Change (IPCC) concluded that Turkey will experience three accelerating trends: rising temperatures, dehydration, and rising sea levels. Thus, the country is likely to experience more frequent and more severe weather conditions throughout the year.

By 2050 temperatures are predicted to increase by 2.5° Celsius in east and central Turkey, and by 1.5° Celsius on the coasts. Temperatures exceeding 40° Celsius are expected in the summer for extended periods.

Additionally, Turkey’s annual precipitation is expected to decrease by about 10% — especially in the west and along the Mediterranean coast — by 2050. This will result in increased water scarcity and periods of drought, problems that will be exacerbated by glacial retreat and decreased snowfall in the mountains, from which half of the country’s water is derived. Turkey’s vanishing lakes are another alarming indicator of this phenomenon. The lakes supply fresh water to metropolitan areas such as Istanbul. According to the Istanbul Water and Sewage Authority, more than 80% of the water reserves in the lakes are now gone. Unfortunately, some of the government’s actions only worsen the situation. President Recep Tayyip Erdoğan's Canal Istanbul project, which seeks to build a canal between the Black and Marmara seas running parallel to the Bosphorus, threatens Istanbul's most important water sources, such as the Terkos and Sazlıdere lakes. Scientists warn of possible salinization of Lake Terkos, while Lake Sazlıdere may lose 60% of its size to the canal. According to a statement from the Istanbul Metropolitan Municipality, the project would lead to one in three Istanbulites losing their water source.

Water scarcity will also lead to greater food insecurity. Turkey will have to reallocate water use away from the agriculture sector, which currently accounts for 74% of the country’s water consumption. Inevitably, strict regulations will be enacted for the farming and animal husbandry sectors. The reduction of water flows in the rivers that power Turkey’s great hydro-electrical industry will also have a significant impact, and the energy sector will need to adjust its strategy as a result.

Rising sea levels present another problem. The eastern Mediterranean will rise 25 centimeters by 2050 and by 0.75 centimeters to 1 meter by 2100. Rising sea levels will greatly impact Turkey’s coastal cities (including Istanbul), infrastructure, residential neighborhoods, roads and bridges, and power and desalination plants.

These changes may create a spike in natural disasters, a problem with which Turkey already struggles. Both gradual changes and extreme events will likely devastate the country, affecting its population, economy, and even national security.

Under President Erdoğan, Ankara became a party of the Kyoto Protocol in 2009 and the Paris Agreement in October 2021. By taking these steps, Turkey committed to achieving net-zero carbon emissions by 2053. Notably, it took five years for the Turkish parliament to ratify the agreement because it wanted to be recognized as a developing rather than a developed country under the agreement, which imposes more substantial — and costly — obligations on the latter category. Additionally, then-U.S. President Donald Trump's decision to withdraw from the Paris Agreement in January 2017 also contributed to Turkey's reluctance.

However, Turkey's ambivalence came to an end with Trump's departure from office. President Joe Biden's recommitment to the Paris Agreement led Ankara to reassess its stance. Deteriorating U.S.-Turkey relations and Erdoğan's eagerness to mend fences with Biden motivated Turkey to take concrete steps: On Oct. 7, 2021, only three weeks before the Erdoğan-Biden summit in Rome, the Turkish parliament ratified the Paris Agreement. The timing reveals Erdoğan's lack of genuine interest in climate change beyond maximizing foreign policy goals.

Immediately following parliament's decision, Erdoğan declared Turkey's "Revolution of Green Development." He aimed to improve Turkey's image abroad by publicizing efforts such as tree-planting, recycling, and the controversial "made in Turkey" electric car. At Erdoğan's instruction, the Turkish Directorate of Communications created a book that was given to President Biden at the summit. The book places blame for climate change on the West’s economic model. It echoes sentiments found in Erdoğan's own book, A Fairer World is Possible, which criticizes the “Western-biased” makeup of the U.N. Security Council. Despite complaining about the world order, Ankara will receive a €3.1 billion loan from the World Bank thanks to its recent ratification of the Paris Agreement.

However, there are some encouraging signs at the domestic and regional levels. Turkey’s Eleventh Development Plan (2019-23) acknowledged its commitment to undertake a “green transformation” requiring substantial economic and social steps. One such step is the National Green Building Certificate System, part of the broader effort to create "green cities". Additionally, Turkey's Ministry of Environment, Urbanization, and Climate Change launched a Regional Climate Change Course of Action, in which it identified necessary actions to combat the adverse effects of climate change. In adopting the National Climate Adaptation Strategy and Course of Change (2011-23), the ministry underlined its awareness of the need for new strategies to preserve water sources, reduce water consumption, increase rain harvests, recycle water, and install drip-irrigation systems. Despite all of the above, Turkey still lacks a binding law that can regulate state mechanisms, as well as civil society.

Whether decision-makers in Ankara choose to acknowledge it or not, Turkey is marching steadily toward environmental disaster. As long as the country lacks binding legislation and populist, pharaonic infrastructure projects — such as Canal Istanbul — continue to threaten its future, Turkey's "Green Development Revolution" will remain incomplete. The results of a 2020 Konda survey on public perception of environmental problems in Turkey indicate increasing awareness about climate change: Around 70% of respondents recognized it as a serious problem. Thus, if the Turkish government steps up to implement the necessary measures to combat climate change, the public is likely to support it.

The country’s recent and worsening environmental crises present an opportunity for Turkey to advance its foreign policy goals by spearheading regional diplomatic efforts toward combatting climate change. This would not only serve Turkey’s own interests, but also benefit the wider region and give Ankara a chance to display true green leadership.

Tomer Barak is an independent researcher and strategic planner specializing in geopolitics of the Middle East, the Sunni world, and the international arena. He served in the IDF at the rank of Lt. Col, primarily in the Intelligence and Strategic Planning Directorates. He holds an M.A. in Security and Diplomacy Studies from Tel Aviv University. He has published in several outlets, including the INSS, IPS, the Times of Israel, The Jerusalem Post, The MirYam Institute and more, mainly on contemporary Middle East, Arab-Israeli relations, U.S.-Middle East policy, and national security issues related to climate change.

Dr. Hay Eytan Cohen Yanarocak is the Turkey analyst at the Jerusalem Institute for Strategy and Security (JISS) and the Moshe Dayan Center for Middle Eastern and African Studies (MDC) at Tel Aviv University. He received his doctorate from Tel-Aviv University’s School of History and is a lecturer at the same institution and at the Hebrew University of Jerusalem. Dr. Cohen Yanarocak is the co-editor of Turkeyscope: Insights on Turkish Affairs. The views expressed in this piece are their own.