Could COVID-19 push Jordan to the edge? 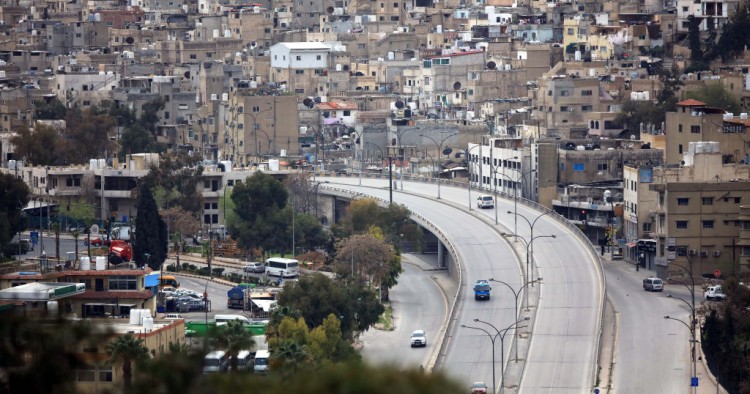 Since the establishment of the Hashemite Kingdom of Jordan a hundred years ago, many have argued at one point or another that the country is on the brink of political or economic instability. It seems increasingly true these days, however. In the past few years, Jordan has suffered from persistent socio-economic challenges: Economic growth has not exceed 1.9 percent, unemployment has risen to 19 percent, and public debt now totals 96.6 percent of GDP.

The unexpected shock of the COVID-19 pandemic adds even more pressure to the already floundering economy. In response, the Jordanian government has taken steps to curb the virus’s spread in the country, closing the borders and decreeing a nationwide curfew. The latter is something of a double-edged sword though. As other countries have done, the government needed to impose strict measures to save lives and to protect the health system from collapse, but doing so also put the economy at risk. The impact of Jordan’s unprecedentedly strict lockdown on an already fragile economy is likely to be dire.

One of the main challenges to the curfew is Jordan’s reliance on informal labor and its sizeable small and medium-sized enterprise (SME) segment. More than 52 percent of the workforce operates informally and around 95 percent of private sector businesses are SMEs, which contribute around 40 percent of GDP. The vast majority of these businesses and workers will lose their cash flow, which will make it harder for them to sustain their business and pay their bills. SMEs might have to lay off many of their workers to cut costs. Day laborers in the construction and agriculture sectors, who are often foreign workers and ineligible for social services, will also lose their source of income, and hence, their ability to meet their daily needs.

Within the context of SMEs and the informal sector, Dr. Allison Hartnett, a political economist and Jordan scholar at Yale University, pointed out that “since most Jordanian companies are micro or small enterprises and we know that firm informality is high, then firm owners aren't liable to get much government support, either because they're informal and thus illegible to the state or because they are too small to survive a lack of revenue for very long.”

Moreover, the tourism sector will also suffer severe consequences as a result of the curfew. At present, all tourism activities in Jordan have ceased. This comes at an especially bad time as the sector had been gaining momentum in the last few years, with expenditures growing by 10 percent last year. Tourism accounted for 12.5 percent of GDP in 2018, employed more than 42,000 workers directly and 130,000 indirectly, and has also made a significant contribution to Jordan’s foreign currency reserves. According to Jawad Abbasi, a Jordanian business analyst, most of the country’s tourism expenditures, which totaled 4 billion dinars ($5.6bn) in 2019, were in foreign currency.

The nationwide shutdown and the resulting aggregate demand shock will further increase the burden on public finances. Tax revenues will be down significantly, especially given the government’s heavy dependence on sales tax, which accounts for 68.5 percent of its annual tax revenues. On the other side of the balance sheet, spending on the health sector will likely increase significantly to deal with the epidemic.

In addition to these two major unanticipated burdens on government finances, Jordan has around $1.76 billion in debt payments to make this year. Taken together, these factors will limit the government’s room for fiscal maneuvering to stimulate the economy after the crisis subsides. Consequently, it will be forced to borrow more, pushing the debt to GDP ratio beyond the 100 percent threshold. Ultimately, this will expose the country’s credit rating to a downgrade, thus increasing the cost of its already expensive public debt.

While many sectors of the domestic economy are likely to shrink, Jordan will also face new external challenges as well, especially in regards to trade. The security of its supply chain will be critically threatened, given that nearly a third of Jordan’s imports come from the countries with the highest COVID-19 infection rates: China (13.62 percent), the U.S. (8.69 percent), Germany (4.6 percent), and Italy (3.09 percent). On the export side, Jordanian industries will also face new challenges: First, it will be harder and even more expensive to get production inputs. Second, they might be unable to export at the same levels due to the inevitable international economic downturn and subsequent decline in demand in global markets.

Based on the above, Jordan is likely to see unusually high levels of unemployment, increased poverty rates, and severely strained public finances, all of which will make it harder than ever for the state to deal with the challenges to come.

Heading into the unknown

Despite the current positive reaction of the Jordanian people and their compliance with the restrictions aimed at saving lives, this momentary amity between the state and the people is unlikely to endure after the virus is contained. In the long run, the emerging economic challenges will likely result in further social unrest and greater popular anger. In 2018, the capital, Amman, witnessed massive protests over a controversial income tax bill that was desperately needed to raise revenues. These were followed by weekly protests over economic grievances that voiced anger against the ruling political elite.

According to the Arab Barometer survey, public trust in the government has fallen sharply in recent years, dropping from 72 percent in 2010 to 38 percent in 2018. Moreover, only 14 percent of Jordanians trust their main elected body, the Parliament. A recently published survey by the International Republican Institute revealed that 72 percent of Jordanians believe that the country is governed in the interest of the few, 66 percent believe that corruption exists “to a large extent” in state institutions, and 57 percent believe that Jordan is headed in the wrong direction.

Given the tense political environment, weak economy, and unprecedented new challenges, COVID-19 will most likely push an already vulnerable Jordan to new levels of uncertainty, political risk, and social unrest.

“Business closure, combined with an already-mobilized middle class who protested against new taxes mean that the state is staring down an even bigger financial crisis with no clear way forward after the lockdown ends,” Dr. Hartnett explains. However, navigating the way forward and concluding that Jordan can survive the crisis, she added that "foreign aid isn't the answer; it only serves to perpetuate a failing system. The state needs to engage in serious economic reform to shore up the ‘missing middle’ and restructure the Jordanian economy to be more resilient to shocks."

Laith Fakhri Al-Ajlouni is Amman-based political economist. He tweets at @LaithAlajlouni. The views expressed in this article are his own.

In the wake of COVID-19, Jordan has limited choices if Israel annexes West Bank settlements

Why Jordan was so quick to reject Trump’s peace plan