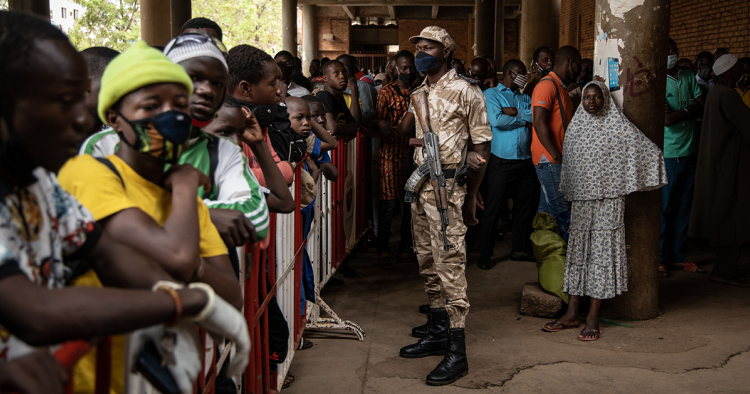 In a volatile international environment, unpredictability reigns. Perhaps nowhere is this more true than in the Sahel, where myriad existing security challenges have only been exacerbated by the devastating impact of COVID-19. Despite significant stabilization efforts, the situation is growing increasingly complex and various interrelated vulnerabilities weigh heavily on the region’s security agenda, including the pandemic, terrorist threats, chronic economic instability, climate change, skyrocketing demographics, and weak governance systems, as well as unprecedented food insecurity and extreme poverty.

While the pandemic is currently the top concern for governments elsewhere, it does not drive other problems down the priority list in the Sahel. All of the countries in the region are inherently vulnerable and are at the bottom of international rankings for peace and development. Niger, Chad, Burkina Faso, and Mali were among the 10 least developed countries in the world in 2021; they have the highest birth rates globally, with Niger reaching a peak of 7.4 births per woman; and according to the 2021 Fragile States Index, the peoples of the Central Sahel face an alarming socio-economic environment.

The economic impact of the COVID-19 crisis on the region has been significant. Some Sahelian countries were hit hard by the drop in oil prices — an essential element of their budgetary stability — especially Mauritania, Niger, and Chad. The global recession triggered by COVID-19 resulted in the collapse of oil prices and severely impacted Chad’s oil sector, which accounts for close to 80% of exports and 40% of government revenue, although prices have since recovered. Moreover, as most of the countries in the Sahel are landlocked, and therefore dependent on other countries for the delivery of their exports and imports, they were greatly affected by border closures, which slowed down the flow of goods and dealt a blow to the poorest households. In Mali it was estimated that more than 1.3 million people were acutely food insecure at crisis levels or greater over the June-August 2020 period. Some regions of the country witnessed significant reductions in the quantities of milk and oil brought in from Algeria and Mauritania following border closures due to COVID-19. According to a U.N. report, 87% of the moderately or severely food insecure households in regions like Timbuktu and Taoudéni attributed their worsening living conditions to the pandemic.

The already acute food insecurity in the Sahel has been exacerbated by the pandemic, which compounded the existing problem of droughts that have stunted agricultural productivity and rendered livelihoods fragile. More than 80% of populations in the region make their living from subsistence rain-fed agriculture. Given the widespread reliance on crop and livestock activities and natural resources, thousands of households lost their main source of income during the pandemic due to market closures or the inability to cross borders in search of pastures in neighboring countries. The restrictions imposed on movement within and across countries have disrupted weak regional and national supply chains, affecting the availability of food and agricultural inputs as well as labor markets. Reduced human mobility has also hampered transhumant livestock farming, undermining the economic resilience of pastoralists. In the Lake Chad basin, the closure of markets and reduced access to pastures have resulted in massive displacement of pastoralists to peri-urban areas. In July 2020, some 150 transhumant herders with nearly 10,000 heads of cattle from eastern Burkina Faso were stuck at the Togo border, leading to a high concentration of livestock and increasing the risk of resource degradation, animal diseases, and conflict with host communities.

If COVID-19 has negatively impacted government effectiveness in delivering public services in the developed world, it has demonstrated that the security crisis in the Sahel is first and foremost a crisis of governance, one that has led many citizens to lose confidence in states that are unable to ensure access to basic services. Prior to COVID-19, there was already significant popular resentment of governments for their poor track record of policies that have failed to live up to citizens’ expectations, particularly in remote areas and the borderlands, and this has only gotten worse during the pandemic. Governance failures have a direct impact on state legitimacy, and the coup in Mali was a salient example of the growing mistrust in governments across the region.

Among other destabilizing effects, the pandemic has resulted in an increase in civil unrest in many of the West African and Central Sahel countries. For example, several hundred traders took to the streets of Ouagadougou in Burkina Faso to demand the reopening of all markets, which were closed to control the spread of the pandemic. The introduction of lockdowns in urban areas, imposition of other restrictions on human mobility across borders, and closure of places of worship all discredited central governments, fueling the discontent and anger that armed groups exploit to recruit fighters and supporters.

In the same vein, the absence of effective responses to the socio-economic repercussions of COVID-19 has created an environment conducive to the rise of violence, giving violent extremists fertile ground to expand their influence. Preventative public health measures, including lockdowns that usually entail limitations of freedoms and thus trigger feelings of disenfranchisement, create an opportunity for extremist groups to intensify their recruitment activities by building on narratives of marginalization. In light of COVID-19, regional governments have shifted their focus away from their traditional security priorities toward the health sector, creating a chance for some non-state armed groups to escalate their attacks on civilians and public infrastructure amid the scaling back of military operations. In Mali, a total of 307 attacks against civilians were reported in April and May 2021 alone. The surge in attacks was particularly acute in the Liptako-Gourma triangle, a border zone between Niger, Mali, and Burkina Faso.

In the Sahel, recurring tensions between pastoralists and sedentary populations are nothing new, driven by a longstanding competition over land, water, and forage. However, the loss of livelihoods caused by restrictions on livestock movement is likely to be exploited by extremist groups, especially by targeting Fulani herders in the region, instrumentalizing their anger toward the government over its inability to provide fodder for their herds. As Sahelian governments commit resources to tackle the challenges arising from COVID-19, their capacity to cover the immediate needs of all segments of society is very limited, affording an opportunity for extremist groups to emerge as alternative service providers.

In addition to its economic and social fallout, COVID-19 has also created humanitarian ripple effects, as restrictions on human mobility and border closures have impeded access to essential aid among refugees and internally displaced persons, causing severe shortages of basic essentials and heightening risks for humanitarian personnel. One of the world's fastest-growing humanitarian crises is now unfolding in the Central Sahel, with a record 13.4 million people in need of humanitarian assistance across the border areas of Burkina Faso, Mali, and Niger. At the same time, however, one-third of the abductions of aid workers worldwide occur in these same countries. Humanitarian operations encumbered by measures to curb the spread of COVID-19 have left vulnerable communities without crucial assistance and protection. In Niger, for instance, some areas were unreachable by humanitarian personnel for up to 226 days. These administrative barriers join other existing security issues, including attacks on humanitarian operations, climate change, and ethnic conflicts to form a lethal combination of risk factors that leads to the delay and sometimes disruption of humanitarian activities.

The need for a new paradigm

Although a considerable part of the funding for efforts to combat COVID-19 in the Sahel comes from European and other non-African nations, the pandemic has cast doubt on the utility of the aid paradigm that perpetuates an image of the Sahel as in chronic misery. The current France-led initiatives, including the Coalition for the Sahel, are repeating the failures of the past by focusing on top-down solutions, without much room for enhancing institutional performance and reinforcing governance systems in the region. A strategic reset of priorities should consider the strengthening of governance as the only way out of the Sahel’s security dilemma.

The peoples of the Sahel want governments that are able to deliver basic services in a fair and inclusive manner. Today more than ever, the priority should be on enabling the region and its people, and they should take ownership of the response to all crises in the longer run. European donors should understand that COVID-19 has undermined the old dichotomies and binary oppositions between developed and underdeveloped worlds, and between Europe as a safe haven and Africa as a threat hotspot. The destinies of both the North and the South are now intertwined.

Mohammed Ahmed Gain is a professor of Postcolonial Studies at the University of Ibn Tofail (Kenitra-Morocco), president of the African Institute for Peacebuilding and Conflict Transformation (AIPECT), and a non-resident scholar with MEI’s North Africa and the Sahel Program. The views expressed in this piece are his own.